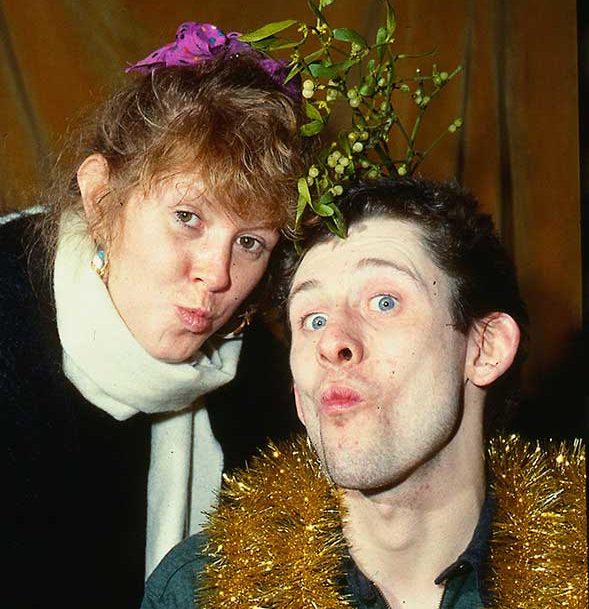 With its unique mix of optimism and melancholy, The Pogues’ Fairytale Of New York is a Christmas song like no other.

As Christmas songs go, The Pogues’ Fairytale Of New York is in a class of its own. Following its original release, on 23 November 1987, the song was denied the UK’s coveted Christmas No.1 spot by Pet Shop Boys’ Always On My Mind, but that hasn’t prevented successive generations of fans taking it to their hearts. It’s still the most-played festive song of the 21st century and, in December 2012, it was voted the UK’s favourite Christmas song in an ITV poll.

That doesn’t, of course, mean Fairytale Of New York is accepted across the board. The song’s biggest supporters love it because it pulls few punches about the reality of Christmas (a time that can be lonely and miserable for many), yet its detractors feel it’s a Scrooge-like humbug spoiling a season of goodwill better expressed through the bonhomie of established classics such as Bing Crosby’s White Christmas or Slade’s Merry Xmas Everybody.

“A song the community can get behind”

It’s fitting, then, that a song centred around a heated argument between a disillusioned Irish emigrant couple even provokes a disagreement when it comes to its own genesis. In accordion player James Fearnley’s memoir, Here Comes Everybody: The Story Of The Pogues, he reveals the band began working on a self-penned Christmas song after manager Frank Murray suggested they cover The Band’s Christmas Must Be Tonight (“It was an awful song… we probably said fuck that, we can do our own”), yet singer Shane MacGowan is adamant that Rum Sodomy & The Lash producer Elvis Costello instigated it when he wagered MacGowan couldn’t write a Christmas duet to sing with bassist (and Costello’s future wife) Cait O’Riordan.

What all concerned do agree on is that Fairytale Of New York had a difficult birth. The song took over two years to complete, and it was repeatedly changed and honed along the way. In its initial form, multi-instrumentalist Jem Finer had sketched out an idea for a song about a sailor missing his wife at Christmas, but that was quickly nixed by his own wife, Marcia, who instead suggested a song with the more universal appeal of a couple falling on hard times.

At this stage, The Pogues hadn’t yet visited New York, though the city was certainly on Shane MacGowan’s radar. The band repeatedly watched Sergio Leone’s Once Upon A Time In America while touring Europe in the autumn of 1985, and this memorable tale of mobsters in interwar New York struck a chord – as did Ennio Morricone’s equally epic film score.

“The most complicated song I have been involved in”

The Pogues recorded an initial demo of Fairytale In New York around the time they recorded their UK hit, A Rainy Night In Soho, but the arrangement was still hesitant and the story then began in Ireland, with O’Riordan singing, “It was a wild Christmas Eve on the west coast of Clare”. The track clearly still needed work, with MacGowan and Finer batting the arrangement around and MacGowan grappling with the words.

“Every night I used to have another bash at nailing the lyrics, but I knew they weren’t right,” the singer told The Guardian in 2012. “It is by far the most complicated song that I have ever been involved in writing and performing. The beauty of it is that it sounds really simple.”

Two important events occurred while The Pogues were still coaxing out the song’s arrangement. Jem Finer began reading JP Donleavy’s 1973 novel, A Fairy Tale Of New York, which gave the group’s song its title (the author later personally gave MacGowan his blessing to use it), and The Pogues finally made it to New York in February 1986. The trip would prove pivotal. As MacGowan later revealed, “It was a hundred times more exciting in real life than we ever dreamed it could be. It was even more like New York than the movies!”

Suitably fired up, MacGowan completed Fairytale Of New York’s vivid lyric, which was set in 40s New York and included a reference to Bing Crosby’s 1948 hit Galway Bay. However, another 12 months elapsed before The Pogues finally captured the song in all its widescreen glory. With producer Steve Lillywhite on board for their third album, If I Should Fall From Grace With God, the band went into London’s RAK Studios during the late summer of 1987, ironically completing the music for their future festive smash on one of the hottest days of the year.

“They weren’t convinced Kirsty was right”

When everyone heard the final results, it was clear the work had been worth it. Though it was gilt-edged in Celtic melancholy, Fairytale Of New York’s majestic backdrop was streets ahead of the rambunctious, punk-imbued folk that had made The Pogues’ name. Played by James Fearnley, the plaintive piano introduction had shades of Tom Waits and Leonard Bernstein’s score for On The Waterfront, while the song was further enhanced by a sophisticated string arrangement by Fearnley and Fiachra Trench.

However, one crucial piece of the puzzle hadn’t yet fallen into place. Cait O’Riordan had left The Pogues in 1986 and the song’s all-important female voice hadn’t yet been finalised. Suzi Quatro and Pretenders’ Chrissie Hynde had been debated before Kirsty MacColl, then married to Steve Lillywhite, was suggested for the role.

Nowadays, it’s impossible to imagine Fairytale Of New York without Kirsty MacColl’s heart-melting contribution, yet, at the time, her involvement wasn’t a done deal.

“To be honest, they weren’t 100 per cent convinced that Kirsty was the right person,” Lillywhite said in 2012. Spending a whole day on her vocals, Lillywhite “made sure every single word had exactly the right nuance. I remember taking it in on Monday morning and playing it to the band and they were just dumbfounded.”

“The right measure of viciousness and romance”

Indeed, Shane MacGowan was so impressed, he even re-recorded his own vocals for the song. But then, he always felt MacColl had exactly what it took to put what he called “the right measure of viciousness and femininity and romance” into her performance.

“I was madly in love with Kirsty from the first time I saw her on Top Of The Pops,” MacGowan said in 2012. “She was a genius in her own right. She could make a song her own and she certainly made Fairytale her own.”

Tragically, Kirsty MacColl died on 18 December 2000. Since then, when The Pogues have performed the song, singers including Sinead O’Connor, Cerys Matthews, Katie Melua and Jem Finer’s daughter, Ella, have performed her part. However, it’s still hard to imagine any other singer investing the same emotion MacColl brings to the song – not least the killer line, “You took my dreams from me,” to which MacGowan’s voice cracks just a little when he responds, “I kept them with me babe/I put them with my own.”

The fact the song’s narrative is left open-ended is, of course, another reason why Fairytale Of New York continues to fascinate. It’s since been covered by artists ranging from Christy Moore to Ronan Keating, KT Tunstall and Ed Harcourt, but in truth, none of them hold a candle to the original.

Fairytale Of New York “isn’t like all the other big Christmas songs”, Rhino Records’ Stuart Wheeley told Billboard in 2019. “It’s completely original, it always sounds as if it could have been written yesterday, and yet it’s over 30 years old. It’s a song that the community can get behind. It’s at home with an orchestra on the grandest of stages, and in the arms of your friends down the pub.”