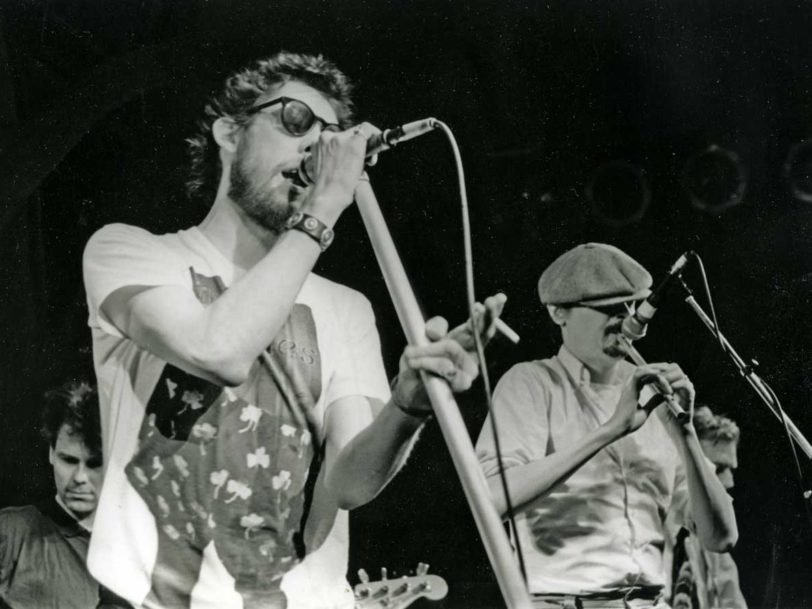 Hell’s Ditch: How The Pogues Strayed From The Beaten Track

Their last album with frontman Shane MacGowan, ‘Hell’s Ditch’ found The Pogues at a crossroads between new ideas and their classic sound.

For many fans of The Pogues, Hell’s Ditch didn’t just mark a point of departure for the band, it marked the end of the band as they knew it. Their last album with frontman Shane MacGowan, The Pogues were caught at a crossroads while they recorded it. Behind them lay their past: frenetic Irish punk-folk that had made them a truly unique proposition on the world’s stage; in front of them: new sounds and influences, explored with typical confidence on Hell’s Ditch. Slumped over at the side of the road while they made their choices: their beleaguered singer, whose well-reported Olympian booze intake was beginning to take its toll, not only on the band’s stability but on his own abilities.

The big question was: could they dig themselves out and make it to safety?

In retrospect, it seems inevitable that The Pogues would find themselves here, if only for those album titles alone: Rum Sodomy & The Lash, If I Should Fall From Grace With God… the signs were always there. If Hell Ditch’s predecessor, Peace And Love, was perhaps a brief detour, its title suggesting MacGowan thought he could trick himself into contentedness, Hell’s Ditch’s seemed to be named for his seemingly unstoppable descent. Not that the group’s main songwriting force didn’t leave The Pogues Mk I with a worthy epitaph. Though its wide range of styles left some listeners baffled at the time, a reappraisal of Hell’s Ditch finds it rewarding those in search of a diverse-minded Pogues. MacGowan’s poetic allusions remain as thrillingly rife as ever throughout the album, while the sheer stylistic range on Hell’s Ditch suggests The Pogues not only remained capable of pulling together as a unit, they could still find inspiration in filtering new sounds through their inimitable vision.

It’s no accident that Hell’s Ditch’s artwork featured a map plotted with song titles. Almost every song on the album found The Pogues straying into new territory. And when, as on opener The Sunnyside Of The Street, the group let loose with their classic sound, the familiarity seems to spur MacGowan into a search for some much-needed stability: “Had the women, I had the booze,” he sings amid a litany of horrors (“bodies in Bombay”, promises “to take my life as I would a whore”), before declaring that he “Just wanna stay right here/On the sunnyside of the street”.

The album’s title track, meanwhile, hitches a seafaring style to their supercharged traditional Irish folk sound, as if a sonic counterpart to the voyage the group now found themselves on. But any optimism is thrown overboard – “Back from heaven, back to hell” – even as they confidently master this new direction. The song is, however, a taster for one of the most startling stylistic shifts in The Pogues’ catalogue: Lorca’s Novena. Weaving lyrical references to the Spanish poet’s own works throughout a narrative that recounts his brutal murder at the hands of nationalists, the song switches between darkly atmospheric Spanish guitar runs – embellished with wordless backing vocals that offer haunting punctuation – and a more straightforward refrain that draws the listener back to solid ground.

Not that Hell’s Ditch is all choppy waters and deathly visions. There’s a deliberate nod to The Beach Boys’ You Still Believe In Me at the start of House Of The Gods (albeit one that transplants the California dreamers to Thailand’s Pattaya Beach, twisting their sonic beauties to altogether different narrative ends). The waltz-time Summer In Siam, meanwhile, all talking piano and gentle flute washes, also includes evocative Eastern percussion that, taken together, is perfect for the short, cyclical song’s dreamy escapism. “When it’s summer in Siam/And the moon is full of rainbows,” MacGowan sings, “Then all I really know/Is that I truly am/In the summer in Siam.” Any levity is only briefly glimpsed, however, as the song fades like a mirage, making way for Rain Street to come storming in. Capturing The Pogues at their shit-kicking best, the song hurtles through MacGowan’s narrative – a series of vignettes that find him seeking redemption through booze-addled eyes.

By the time of Hell’s Ditch’s release, on 6 November 1990, MacGowan’s voice, too, was beginning to show the strain. In the past he’d managed to inject the right amount of boozy weariness to his vocals – it was all part of the presentation. Now, however, he was audibly slurring and tumbling over his words. If multi-instrumentalists Jim Finer and Terry Woods stepped up admirably for Rainbow Man and The Wake Of The Medusa, respectively (the latter revisiting the story depicted in the painting that gave Rum Sodomy & The Lash its striking artwork), their presence also served to highlight MacGowan’s ailing condition.

Sitting in the producer’s chair, The Clash’s Joe Strummer was also on hand to lend support during the sessions. A man whose own musical upbringing was shot through with folk history and punk aggression, he made a natural fit for The Pogues. Largely stepping back to just let them do their thing, he also knew how to give the album’s more straightforward moments – Rainbow Man, the closing Six To Go – a bit of the radio-friendly sonics that never did anything to hurt his former band’s own stylistic experiments. Soon, he would be fronting The Pogues for a brief spell, before being replaced by Spider Stacy.

What the remaining Pogues learned from Hell’s Ditch spilled into their two albums without Shane MacGowan – most notably on 1993’s Waiting For Herb. If MacGowan’s post-Pogues career found him making intermittent recordings with a new outfit, The Popes, for many fans, Hell’s Ditch remains a last missive from his glory days.

The exclusive orange vinyl can be ordered here, directly from the Dig! store