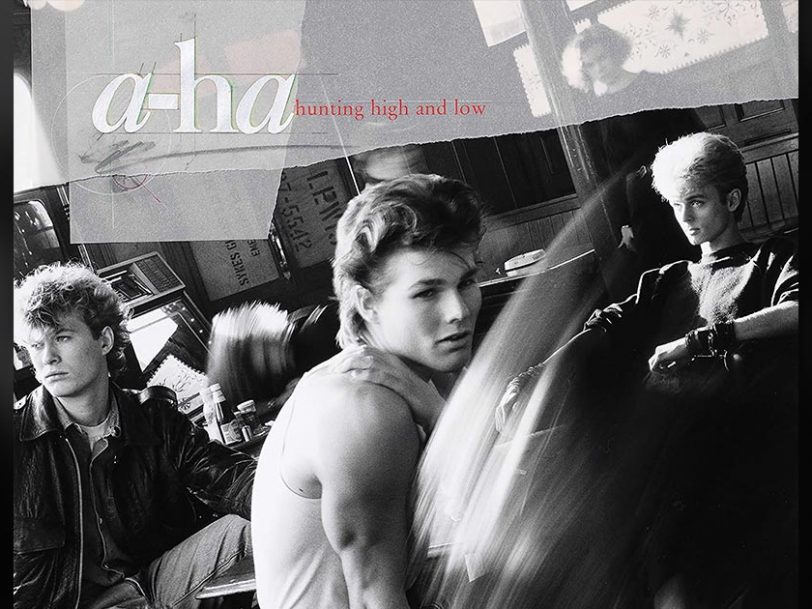 In ‘Hunting High And Low’, a-ha created one of the 80s’ classic albums, aided by the charm of their songwriting and a certain video…

It had to start in London. Building an international career from Norway seemed impossible for the freshly formed a-ha and, when they arrived, in April 1983, the UK’s capital was the heart of “New Pop”, a colourful, MTV-fuelled explosion of synths and costumes that was captivating the world. Magne Furuholmen, on keyboards and guitar, vocalist Morten Harket and guitarist Paul Waaktaar-Savoy secured the dingiest digs they could and spent what cash they had on days recording their debut album, Hunting High And Low, in an obscure recording studio based in Sydenham, south-east London. They worked on demos begun when the band formed the previous autumn and, in time, the trio felt they had enough material to hold a showcase for record labels. It was Warner Bros that bit. “There was a glow about them,” recalled the label’s Andrew Wickham, who was instrumental in the group’s breakthrough. “Morten Harket had the musical equipment of Roy Orbison and no one is greater. Wonderful melodies. I loved them.”

A huge vote of confidence

Producer Tony Mansfield, who had been in the band New Musik, shaped seven of Hunting High And Low’s ten tracks, and there was an obvious contender for the set’s first single, but, despite the label’s confidence, the classic Take On Me failed to catch alight on its first UK release, in October 1984, though it made the Top 3 in the band’s homeland. A rethink was required, and veteran producer Alan Tarney, who had worked with singers such as Cliff Richard, was persuaded to rework the song with the group while also recording The Sun Always Shines On TV in the same week.

Signing off an enormous £100,000 budget for a new Take On Me video was a huge vote of confidence, but the Steve Baron-directed epic worked, and the rest, as they say, is history. Take On Me will forever rotate on radio playlists and undoubtedly remains one of the best a-ha songs of all time, but there are so many other great cuts on Hunting High And Low.

Almost as familiar is the band’s only UK No.1, The Sun Always Shines On TV (Take On Me would peak at No.2 in Great Britain, but got all the way to the top in the US). This was meaty, melodic synth-pop dense enough to interest the rock audience in time, nestling among the altogether less commercial Train Of Thought – issued as the album’s third international single – and Hunting High And Low’s glorious title-track ballad, which has since been a reference point for artists such as Coldplay’s Chris Martin, and was reworked with Alan Tarney, who added layers of lush instrumentation for the song’s single release.

Elsewhere, Hunting High And Low contains lighter moments – the perky Love Is Reason, actually picked as a single in their homeland, is a fan favourite, and The Blue Sky and I Dream Myself Alive also contain the dense melodic structure that characterises much of this band’s work. Few groups mastered the musical dexterity of the synthesiser as flamboyantly as a-ha, mixing this skill with a terrific pop nous and the romance of Scandinavian storytelling.

Living A Boy’s Adventure Tale is a fragile, midtempo cut that is worth checking out in its early demo form, which can be found on the album’s deluxe reissue from 2015. Recorded in Nærnes, Norway, in late 1982, it’s staggering how strong these early sessions are – the songwriting talent is evident from the off. In fact, the 25 demos on deluxe edition are uniformly strong (though Lesson One, which became Take On Me, will surprise you). Meanwhile, the fragile ballad And You Tell Me and the epic Here I Stand And Face The Rain complete the album, the latter bringing things to a close with the perfect final track.

When Hunting High And Low was released, on 28 October 1985, commercial success was assured for a group that had proven it could easily master the pop formula. But while those sales wouldn’t have been unwelcome, the enormity of that first hit single overshadowed the group’s true capabilities. Things settled somewhat, as albums such as Scoundrel Days and Stay On These Roads found a-ha wilfully and confidently veering off into less safe territory, but nothing could dim the glow of their brilliant, world-conquering beginning.