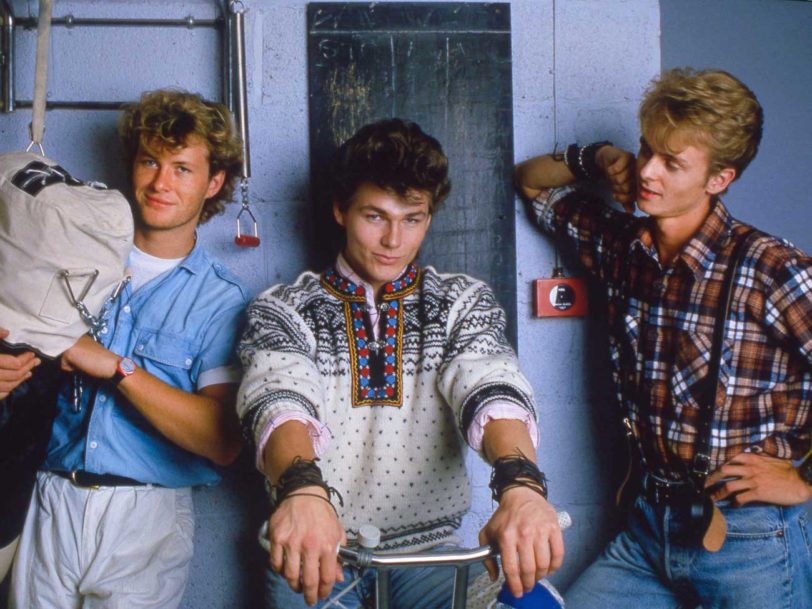 The Sun Always Shines On TV: a-ha On The Cusp Of Greatness

Hailed as an 80s take on the Wall Of Sound, The Sun Always Shines On TV found a-ha elevating themselves beyond the average synth-pop band.

Released on 16 December 1985, The Sun Always Shines On TV unfathomably remains a-ha‘s only UK No.1 hit. Over three decades on and five million copies later, however, the circumstances of a-ha’s two-week chart apex are inconsequential. It’s the legacy of the song itself that commands attention.

The song almost never happened. Guitarist Paul Waaktaar-Savoy (born Pål Waaktaar Gamst) remembers that, during recording, both Magne Furuholmen (keyboardist) and Morten Harket (frontman) were bedridden with fever in the studio. It was producer Andrew Wickham’s secretary who determined that The Sun Always Shines On TV was too good to pass up. Plus, the group’s beginnings in New Romantic London were a major influence. Harket told the Daily Mail in 2009: “When we first arrived in 1983, it was like being drowned in pop music… I got arrested for being drunk and disorderly. I spent the night in the slammer with some drunks and a couple of transvestites.” This was around the time the group shared a scroungy bedsit infested with damp – but at least it was as cold as the country they called home.

Released earlier in 1985, a second version of Take On Me had already cemented the group’s place in pop history. But though The Sun Always Shines On TV would fail to outshine their signature song, it also offered something of an epilogue. It’s promo video, which won the 1986 MTV Video Music Award for Best Editing In A Video, and was shot in Richmond-upon-Thames, begins with the “end” of Take On Me, as Harket struggles to fend off his rotoscoped self in front of his then girlfriend, Bunty Bailey. The rest of the clip sees the group performing emphatically to a swarm of mannequins.

The song’s optimistic message may be lost on some. a-ha assuredly looked to the small screen for comfort, but though the 80s gave rise to the “MTV Generation”, television probably had more of an impact on previous generations. For the most part, gone are the days of families huddled in the living room, eagerly awaiting the next episode of whichever sitcoms they related to best, as are the seemingly endless waves of teens hoping to catch the next big thing on MTV or Top Of The Pops. For countless kids, TV was their very first exposure to the world of art, and while it has – and continues to receive – plenty of negative press, it’s certainly been an inspiring and optimistic force for many. Though a-ha find themselves locked in a freeze-frame at the end of The Sun Always Shines On TV’s video, remain assured: the belting out of their stratospheric tune to a lifeless crowd embodies the belief that every cloud has a silver lining.

Of course, the song’s appeal has rubbed off on musicians. It has been covered multiple times, ranging from Norwegian metal outfit Susperia to Belgian dance group Milk Inc. Bono has also said that The Sun Always Shines On TV was a direct inspiration for U2’s own Beautiful Day, and the band went on to perform both tracks live in Oslo in 2005. But perhaps more fittingly, a-ha themselves opted to play it at the Nobel Peace Prize Show in 1998, after being introduced by Meryl Streep and Liam Neeson.

On the cusp of greatness

As music critic Tim DeGravine stated, “If ever a 1980s song qualified as Wall Of Sound, The Sun Always Shines On TV would be it.” Phil Spector’s celebrated production style of the 60s is just one of many features of popular music that a-ha effortlessly emulated, here with help from Waaktaar-Savoy’s monolithic guitars and an unyielding bassline courtesy of a Yamaha DX7 synthesiser, the latter of which had already proved itself an essential ingredient for 80s power ballads, seeing action on Rush’s Tom Sawyer and Van Halen’s Jump, to name just a few.

With The Sun Always Shines On TV, a-ha were on the cusp of greatness. They had mastered the soaring melodies and intricate beauty of synth-pop throughout most of 1985’s Hunting High And Low album, but it’s the immediacy of the rock guitar riffs they employed – as developed on such songs as Manhattan Skyline, from Hunting High And Low’s follow-up, Scoundrel Days – that led to their to true distinction. That is, however, one reason why their wider catalogue remains overlooked by many: a-ha were far more than your average synth-pop band. Since day one, they’ve been clever enough to know when to use an inviting and sometimes urgent piece of music; they do not rely on ballads, as some artists do, rather they stumble onto anthems with a masterful combination of synth-pop and arena rock.

The Sun Always Shine’s On TV’s longevity might be attributed to not only the band’s musical prowess but also the lyrics’ double meaning: the sun really does always shine on TV, because TV isn’t real. It’s an escape from a terrible job, or a gateway to a reality that isn’t our own. But that same sun is also a reflection of hope: things will always get better. And therein lies synth-pop at its most magical: an electronic genre becoming something unmistakably human.