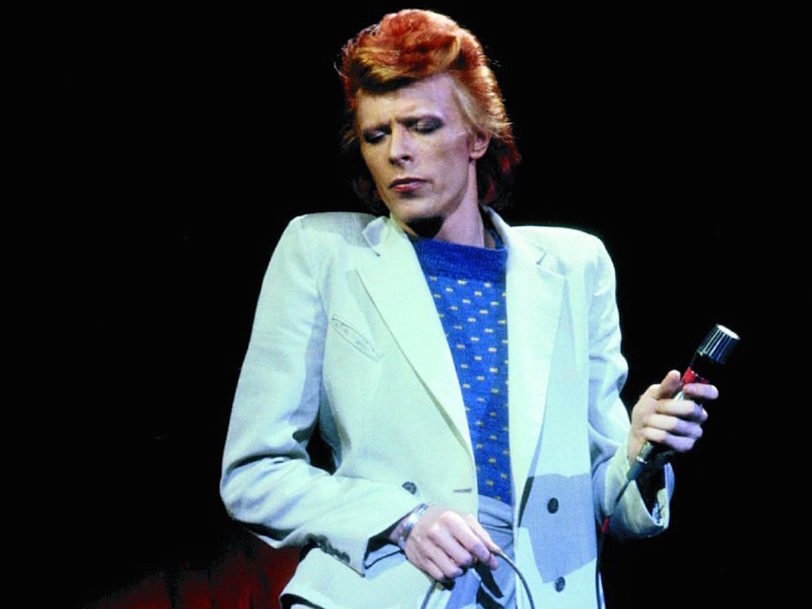 Consigning Ziggy Stardust to the past, the Diamond Dogs tour – and ‘David Live’ album – saw Bowie move into his ‘plastic soul’ phase.

In July 1973, when David Bowie stood centre-stage at London’s Hammersmith Odeon and stunned his devoted fans by announcing it was “the last show we’ll ever do”, it sounded like he was killing his career as a live performer, not just consigning Ziggy Stardust And The Spiders Of Mars to the past. Yet, just 15 months later, Bowie released his first official live album, David Live: a lavish double-disc souvenir of a run of Philadelphia shows performed during Bowie’s gargantuan US Diamond Dogs tour, which was still ongoing when the album hit the racks on 29 October 1974.

“It was good fun and dangerous”

Since effectively retiring Ziggy Stardust, Bowie had quickly made good on his promise that “there were other things I needed to do”. After his stopgap covers album, Pin Ups, he’d struck out for pastures new with May 1974’s acclaimed Diamond Dogs, which topped the UK charts and was heading for the Billboard 200’s Top 10 when Bowie embarked on the lengthy US jaunt he’d secured to support the record.

At this juncture, the Diamond Dogs tour could count itself among rock’s most ambitious undertakings. Two months of rehearsals were required to get everything ready, with Bowie and co-designer Mark Ravitz (who later designed sets for KISS and Whitney Houston) creating an extravagant theatrical stage set, based around a concept Bowie called “Hunger City”. Partially inspired by Fritz Lang’s 1927 sci-fi movie, Metropolis, and Robert Wiene’s silent horror The Cabinet Of Dr Caligari, the completed set cost an estimated $250,000, weighed six tonnes and incorporated over 20,000 moving parts, including props such as streetlamps, chairs and catwalks.

Performing in such an elaborate setting wasn’t without risks. As Bowie recalled in a 1990 interview with Musician, the tour “was good fun and dangerous, with the equipment breaking down and the bridges falling apart on stage. I kept getting stuck out over the audience’s heads, on the hydraulic cherry picker, after the finish of Space Oddity.”

“The most spectacular rock show ever seen”

Regardless of these occasional gaffes, the Diamond Dogs tour garnered considerable praise. After rehearsals at the Capitol Theatre in Port Chester, New York, the trek’s first leg opened at the Montreal Forum in Canada on 14 June 1974, with fans and critics loving theatrical set pieces such as Bowie performing Big Brother atop a multi-mirrored glass asylum and emerging for the next song, Time, sitting in the palm of a giant hand covered in small bulb lights. Typical of the reviews was the Toronto Globe And Mail’s, which declared Bowie’s show at the city’s O’Keefe Auditorium to be “the most spectacular rock show ever seen – the whole show was well-rehearsed, and the choreography alone was more complex than many roadshow musicals”.

Running throughout June and July 1974, the demanding first leg of the Diamond Dogs tour moved from Canada into the industrial heartland of the US, taking in cities such as Detroit and Pittsburgh, before winding up at New York City’s prestigious Madison Square Garden a week later. Before hitting the Big Apple, however, Bowie played six consecutive nights at the Tower Theater in Philadelphia from 8 to 13 July, highlights from all but the last of which were selected for David Live.

“‘David Live’ was the final death of Ziggy”

Bowie later said that “David Live was the final death of Ziggy”, and these initial Diamond Dogs tour dates found him radically overhauling some of his best-known tracks as if to draw a line under his recent past. By now, though, Bowie fans were becoming adept at turning to face the strange, so his open-minded supporters again found plenty to embrace, with standout reworkings including The Width Of A Circle’s widescreen funk reinvention and the irresistible Latin jazz makeover of Aladdin Sane’s title track.

Elsewhere, though, the Shaft-esque stylings of Diamond Dogs album highlight 1984 and a louche cover of Stax Records star Eddie Floyd’s Knock On Wood offered the most substantial clues as to where Bowie was heading as he let glam-rock recede into the distance. Indeed, after the Diamond Dogs tour’s first leg concluded, Bowie immediately decamped to Philadelphia’s Sigma Sound studios with producer Tony Visconti and key band members, including pianist Mike Garson and sax virtuoso David Sanborn, where they began work on Bowie’s next studio album, the soul-enhanced Young Americans.

“There are no limits to where he will take a genre”

Bowie’s burgeoning interest in US soul and R&B also informed the content of his remaining Diamond Dogs dates. Indeed, several of his Young Americans collaborators, such as the (then relatively unknown) vocalist Luther Vandross and guitarist Carlos Alomar, were drafted into Bowie’s live band when the Diamond Dogs tour’s second leg opened on the US West Coast in September 1974.

Previously a session musician of some repute, with a CV including work with soul and funk greats James Brown and Wilson Pickett Alomar offered Bowie invaluable insight into 60s and 70s Black music; for the next 14 years, he became Bowie’s de facto band leader. He also brought Bowie’s long-term drummer Dennis Davis into the fold for the final leg of the Diamond Dogs tour, which ran through October to December 1974.

By this point, however, Bowie’s stage production had again altered radically. Variously referred to as the Soul or Philly Dogs tour, this final run of shows saw him ditching the elaborate stage set in favour of a simpler, stripped-back soul revue presentation. His Stateside audiences had barely caught up with Diamond Dogs characters such as Halloween Jack, but Bowie’s live set was already sprinting ahead, and his show for the Philly Dogs dates included several future Young Americans staples, among them Win, Somebody Up There Likes Me and the record’s dynamic title track.

“A blurred blueprint of a blurred pop star”

Though its three legs consisted of a whopping 73 dates, the Diamond Dogs tour was strictly confined to the US and Canada, though David Live’s release helped keep Bowie’s European fans in the loop. The artist himself hated the sleeve, which pictured him onstage in a relatively sober trouser suit (“It looks like I’ve just stepped out of the grave,” he famously remarked), but the record itself provided a fascinating snapshot of Bowie in transition, fervently feeling out the future.

“David Live is a blurred blueprint of a blurred pop star shedding skins, changing clothes, hair, sound, style, mind, logo, becoming a near American to see what will happen,” author and critic Paul Morley later wrote in The Age Of Bowie. “There are no limits to where he will take a genre, because there is no limit to his imagination.”

Check out our best David Bowie songs to find out which Diamond Dogs track made the cut.