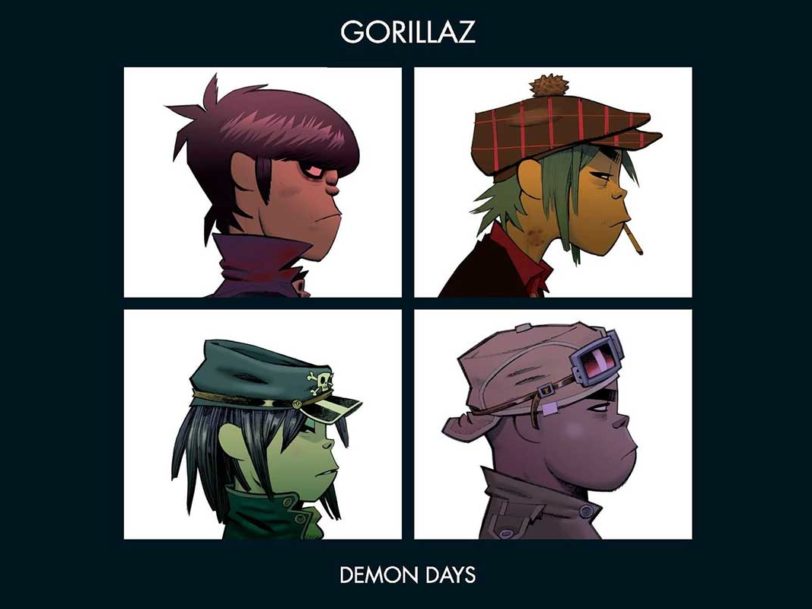 It’s unlikely that even Damon Albarn could have foreseen the success of Gorillaz’s self-titled debut album. Released in 2001, it gave Albarn unprecedented global success – particularly in the US, where his fortunes with Blur, the band he’d first found fame with, had often been mixed. Released four years later, the hip-hop inspired cartoon side-project’s follow-up, Demon Days, took things to another level, becoming the biggest-selling album of Albarn’s career, eclipsing landmark Blur records and giving its mastermind a huge amount of artistic freedom. Hidden behind his animated band, Albarn could try things that he would never have dared as the frontman of one of the biggest indie bands of the 90s.

Rather than repeat the tried-and-tested formula that had worked so well on Gorillaz’s debut, Albarn mixed things up from the off, with Danger Mouse replacing Dan The Automator on production duties. The decision demonstrated Albarn’s eye for spotting up-and-coming talent: Danger Mouse had only recently come to prominence with The Grey Album (an innovative mash-up of The Beatles’ “The White Album” and Jay-Z’s The Black Album), but that was enough to convince Albarn that he was the man for the job.

That sense of ambition was evident even in the album’s poppiest moments. Lead single Feel Good Inc. may have reached No.2 in the UK and No.14 in the US, but it was hardly straightforward “hit single” material. Starting out as a snazzy bit of robo-funk with a drawled rap from Albarn (or 2-D, his cartoon counterpoint), the song progresses to a blissed-out chorus before De La Soul barge in like an unruly tag-team rap mob. In the wrong hands, it could have sounded like a clumsy mish-mash, but Albarn and Danger Mouse turned the contrasting elements into a moment of exciting pop alchemy.

“Freestyle off the top of your head”

Similarly, the elements that made up Demon Days’ second single, DARE – slick, booming basslines; Prince-like synth hooks; rambling vocals from Happy Mondays’ Shaun Ryder – may not have made it the most likely contender for a chart-topping hit, but Albarn’s absurdly catchy falsetto (sang with Rosie Wilson) provided the hook needed to propel the song to No.1 in the UK.

Again, Albarn’s newfound creative freedom provided happy accidents that led to magical moments, as Ryder told NME in 2015: “Damon put a track on, it had no lyrics. I had the cans on, and he said, ‘Go in the studio and try and do something. Freestyle off the top of your head, make it up…’ So I put the headphones on and there was no track. I started saying to them to turn it up and the track was very slowly turning up, so I started going, ‘It’s coming up, it’s coming up, it’s coming up,’ and when it got as loud as I wanted it, I said, ‘It’s dare.’ As in like text-speak language – ‘I will c u der’. I then tried to freestyle something, a right load of gibberish, and it ended up in.”

Elsewhere, Demon Days mixed foreboding grooves with a playful musical approach: Dirty Harry brings together an irresistible groove, children’s choir and string breaks; Fire Coming Out Of The Monkey’s Head sees actor Dennis Hopper narrating a parable about the destructive nature of humankind over a Specials-like slice of foreboding reggae; All Alone sees Albarn trying on the droll punk-funk of Ian Dury And The Blockheads for size.

Released on 11 May 2005, Demon Days was a massive success, selling over eight million copies worldwide and kickstarting a period of adventurous creativity for Albarn – the debut album by The Good, The Bad & The Queen followed in 2007, the same year as his musical, Monkey: Journey To The West, premiered. With new projects coming at such a rate, it took five years before he could return to Gorillaz, whose third album, Plastic Beach, revisited the dazzlingly kaleidoscopic approach of its predecessor.

An eclectic and subversive album whose lyrical focus on political turmoil and ecological concerns speaks to its time while remaining no less relevant today, Demon Days also gave a voice to artists otherwise overlooked by the mainstream. Not bad for a “virtual” band set on subverting reality…

Find out where Feel Good Inc ranks among our best 2000s songs.