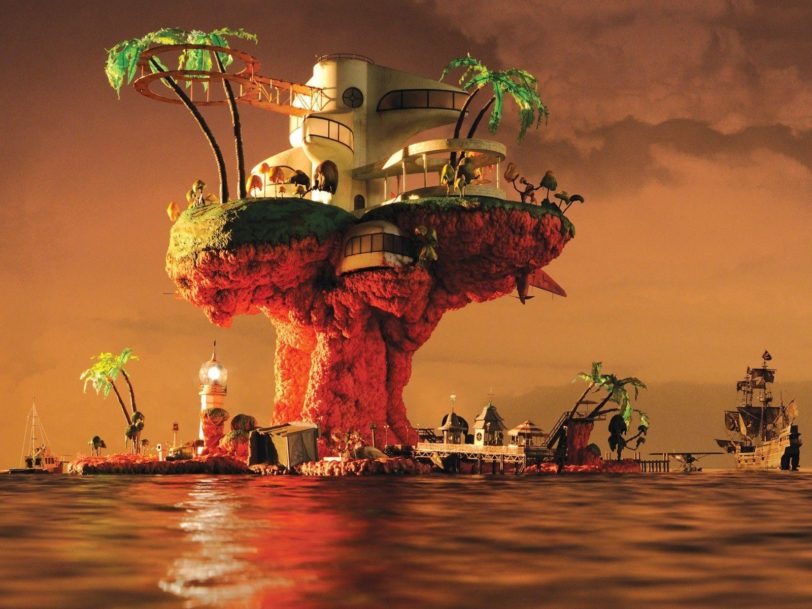 A ‘meditation on the state of our oceans’, Gorillaz’s ‘Plastic Beach’ album pulled out all the pop stops while warning of environmental ruin.

There aren’t many musicians who find themselves scaling new creative peaks two decades after their first record but, by the release of Gorillaz’s third album, Plastic Beach, in 2010, Damon Albarn wasn’t your average musician. Having put Blur on hiatus following 2003’s Think Tank, he concentrated on Gorillaz, the “virtual band” he’d formed with artist Jamie Hewlett, and whose debut album had upended pop music in the early 2000s. What began as a side project turned into a staggering success as Gorillaz’s second album, 2005’s Demon Days, became the hit of Albarn’s career, selling eight million copies to date while featuring artists as diverse as MF Doom, Neneh Cherry, Shaun Ryder and De La Soul. By the time it drifted into view, Plastic Beach was about as hotly anticipated as albums come.

“Pop music is a great place to get new ideas across”

Meanwhile, Demon Days’ success had given Albarn even more creative freedom. While many artists would have found immediately repeating its success too irresistible to refuse, Albarn instead formed another new group, The Good, The Bad & The Queen, with Fela Kuti’s drummer of choice, Tony Allen, along with The Clash’s Paul Simonon (bass) and The Verve’s Simon Tong (guitar). Their self-titled debut album was a thing of subtle, cinematic beauty – a loose concept piece about London that ranks among Albarn’s greatest achievements. Still unable to keep still, Albarn penned his first opera, Monkey: Journey To The West, created with director Chen Shi-Zheng and Jamie Hewlett, which premiered at Manchester International Festival in June 2007 and was soon followed by a soundtrack recording. Hardly seeming stuck for ideas, Albarn nevertheless staged another about-turn in the summer of 2009, reuniting with Blur for a hugely successful run of headline festival slots.

By this point, the apparently tireless Albarn was already deep into what would become Plastic Beach. Speaking to Paul Morley for The Guardian, he revealed, “I’m making this one the most pop record I’ve ever made in many ways, but with all my experience to try and at least present something that has got depth. I think pop music is a great place to get new ideas across.” That idea of using Gorillaz as a platform to discuss big issues (emulating The Clash and The Specials, groups he’d long admired) was key to Albarn finding his way to Plastic Beach.

“A meditation on the state of our oceans”

Albarn and Hewlett had been working on a wide-reaching project called Carousel, which Hewlett had previously told Mark Kermode was “sort of like a film, but not with one narrative story. There’s many stories, told around a bigger story, set to music, and done in live action, animation, all different styles… Originally it was a film but now we think it’s a film and it’s a stage thing as well.” Apparently Albarn had written roughly 70 songs for the multimedia project, which was set to take place on a 100-foot pier, as he told The Times in 2010: “The pier was basically birth, childhood, adulthood and so on until, at the very end, you had this carousel with creatures on it, and the carousel was the flashback of your entire life. We’d got pretty far along with that.”

While Carousel fell by the wayside, some of the material Albarn had worked on was brought into focus by a seaside stroll, as he told BBC Radio 4’s Today Programme in 2010: “I was walking on Hallsands beach in south Devon around 18 months ago, where I have a house just on the cliffs above it. It’s a very clean beach generally, but I realised that there was an amount of very small particles that weren’t stone or glass, but plastic. It was the beginning of a meditation on the state of our oceans.”

Albarn now had his big idea to get across – Plastic Beach was set on an island in a future world overrun with debris and irremovably changed by pollution. Its songs dealt with the danger of disposability, both in day-to-day objects and culture, and pointed the finger at the human failings that were responsible for the state of the planet. Albarn was canny enough to know that the best way of making his point heard was to make the songs as accessible as possible, and so Plastic Beach was packed with hooks, star guests and genre-skipping, Day-Glo music. It worked. Released on 3 March 2010, the album hit No.2 in the US and UK, went Top 5 across the world, and launched the band’s first world tour, including headline performances at Glastonbury and Coachella.

“I don’t think we can ever leave Plastic Beach”

The scene is set by the short Orchestral Intro, featuring Sinfonia Viva, the orchestra of a not-for-profit music-education charity based in the East Midlands city of Derby. A cinematic and elegant start, it’s quickly disrupted by Welcome To The World Of The Plastic Beach, with punchy horns courtesy of Hypnotic Brass Ensemble, Gorillaz’s typically laidback, hip-hop-informed beats and Snoop Dogg welcoming listeners and calling for their attention: “Kids, gather ’round, yeah, I need your focus/I know it seems like the world is so hopeless.” But things have barely settled in before White Flag begins, its first minute devoted to an enchanting introduction played by the Lebanese National Orchestra For Arabic Music before cartoonish electronica kicks in and rappers Kano and Bashy bring some grime to Gorillaz’s world. Barely five minutes in and Albarn has already used Plastic Beach to straddle an array of different musical and cultural sensibilities. Most importantly, it’s an absolute riot.

And the guests keep coming: Bobby Womack and Mos Def on the unrelenting robo-funk of Stylo; Gruff Rhys, of Super Furry Animals, and De La Soul on the daisy-fresh bounce of Superfast Jellyfish; Little Dragon duetting mournfully with Albarn on Empire Ants and To Binge; The Fall’s Mark E Smith barking obscurities on Glitter Freeze; Lou Reed bringing NYC cool on the breezy groove of Some Kind Of Nature; Womack and Sinfonia Viva returning for the majestic Cloud Of Unknowing. But despite his well-thumbed address book, the project’s beating heart is Albarn himself – the songs on which he takes up lead vocals shine. Rhinestone Eyes is the closest in feel to early Gorillaz, Albarn’s drowsy and conversational speak-sing verses punctuated by massive synth hooks, while On Melancholy Hill and Broken evoke the woozy, careworn ballads that Albarn has always excelled at, whether with Blur (Think Tank’s Out Of Time) or as a solo artist (the title track to his debut solo album proper, 2014’s Everyday Robots).

“Maybe I need to revisit it”

Plastic Beach remains an ambitious, playful highlight of Gorillaz’s back catalogue – a body of work that, even within Albarn’s increasingly wide-ranging discography, continues to morph and change shape as demands require. “Maybe I need to revisit it, really,” Albarn told Radio.com in October 2020, suggesting he may record a sequel to the album. “I don’t think we can ever leave Plastic Beach. I’d like to just have an album called Clean Beach, but at the moment it’s still Plastic Beach. So Plastic Beach 2 is a nice idea for me creatively but it’s also really depressing… but it’s necessary.”