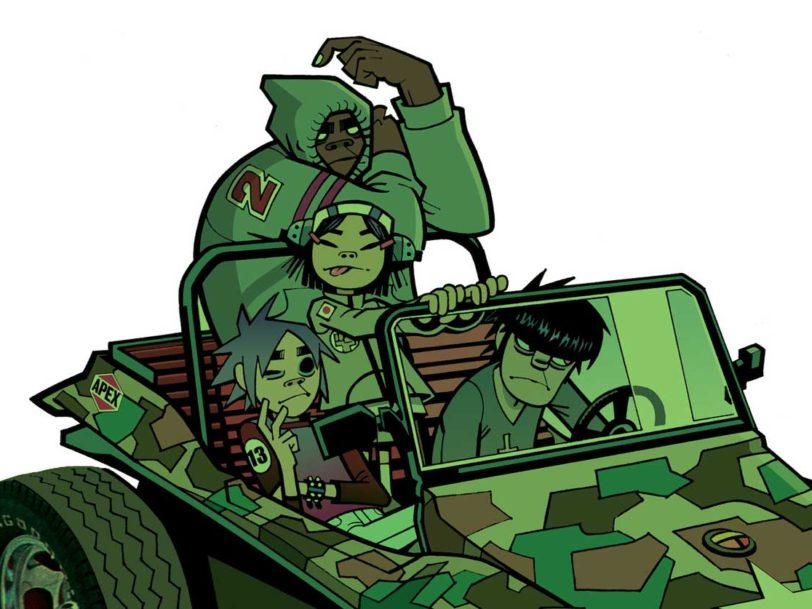 Capturing the zeitgeist of the early 21st century, Gorillaz’s debut album introduced the endlessly adaptable ‘virtual band’ to the world.

If any band captured the zeitgeist of the early 21st century, it is Gorillaz, who succinctly encapsulated their outlook in the chorus of their debut single, Clint Eastwood: “The future is coming on.” The groundbreaking, award-winning “virtual band” has been helmed since 1998 by Damon Albarn, who had been itching to experiment outside of Blur, the group that had brought him fame in the Britpop era. The problem of where to put Albarn’s potentially centreless and mismatched alternative songbook found a fine solution in working with another icon of British culture, Jamie Hewlett, who had shaken up the comics world with his provocative Tank Girl series (later adapted into a film), and with artwork for Blur contemporaries such as The Senseless Things and Cud, before sharing a flat with Albarn. Together, the pair shaped the sound and vision of Gorillaz’s debut album.

To bind Gorillaz together, Albarn and Hewlett created a multicultural line-up, the members of which (Albarn’s stand-in, 2D; bassist Murdoc Niccals; guitarist/keyboardist Noodle; drummer Russel Hobbs) had full backstories and are still turning out Spotify playlists and audio-visual projects today. And why not, in this digital world? Hewlett’s distinctive artwork graced Gorillaz’s single and album covers, promo videos and other tie-ins, while the band’s name appeared to be a nod to that most famous of manufactured groups, The Monkees (Hewlett had notably provided artwork for Rampage’s 1995 drum’n’bass cover of The Monkees’ theme tune).

Released on 26 March 2001, Gorillaz’s debut album kicked this grand concept off, with extensive credits from prolific US hip-hop producer Dan The Automator. Its opening track, the sweet and funky Re-Hash, features deep bass drops along with vocals from Miho Hatori, from the genre-bending Japanese-American group Cibo Matto. This pairing started a collaborative tradition which would eventually include a kaleidoscopic array of luminaries as multicultural as Albarn and co’s virtual counterparts.

The grittier 5/4, by contrast, could almost be a Blur track, while both the brief Punk and the album-closing update on The Modern Lovers’ Roadrunner, M1 A1, also share DNA with the immediacy and lo-fi crunch of Blur’s Song 2 (the album’s rear sleeve features Hewlett’s graffiti proclaiming the record to be a “LOFi THRILLeR”).

Meanwhile, the doped-out, melodica-touched trip-hop single Tomorrow Comes Today features cryptic lyrics that perhaps hint at the intrusions which may have led Albarn towards favouring the virtual approach to music-making. It sported a video that epitomised Gorillaz’s outlook: the band being introduced in animation, over a montage of urban landscapes. It is of a piece with the bluesy, Bo Diddley-sampling New Genious (Brother), which follows.

On the low-slung spaghetti Western-flavoured single Clint Eastwood, Albarn found a verbal sparring partner in scientific yet banging American rapper Del Tha Funkee Homosapien, who had been awaiting his moment in the limelight since releasing strong early work a decade prior. Del had already featured with Dan The Automator in Deltron 3030, and with both The Automator and Hatori on the collaborative Handsome Boy Modeling School project (with De La Soul producer Prince Paul), which must have served as an early inspiration for Albarn and Hewlett. (A lively album bonus comes in the shape of Ed Case’s Clint Eastwood remix, featuring dancehall reggae vocalist Sweetie Irie, which sped the tune up into a glorious, sunny bit of pop, which became a huge British hit and is still getting plaudits today.)

Albarn delivers a fragile, reggae-tinged falsetto on Man Research (Clapper), while Slow Country also has a sweet’n’sour reggae vibe, with lyrics expressing a wish to escape urban life. In comparison, the scratch-led Sound Check (Gravity) and the instrumental hip lounge vibes of Double Bass show Dan The Automator’s influence, before Del returns for the catchy, flute-laden single Rock The House, with its dynamic, martial arts-peppered video.

The jaunty, kooky 19-2000 features Hatori again, alongside Talking Heads’ Tina Weymouth. The Soulchild remix featured on some editions of the album, underpinning the track with a familiar breakbeat, while Wall Of Sound Records big beat act The Wiseguys delivered a manic percussive remake on the single, whose video found Gorillaz taking the jeep from the album’s front cover on a cruise reminiscent of a Tank Girl adventure. Notably, the adaptable track was also repurposed for a collaborative single with cult US rapper Redman (Gorillaz On My Mind), excerpted from the Blade II soundtrack.

Stretching further out, Latin Simone (¿Que Pasa Contigo?) features Buena Vista Social Club singer Ibrahim Ferrer intoning sweetly over a shuffling hip-hop beat. Albarn would further explore his interest in world music with such later projects as Mali Music, Africa Express and The Good, The Bad And The Queen (featuring the late Afrobeat drummer Tony Allen, who also played with Gorillaz), but here showed a delicate understanding of how to potentially sit acoustic Latin music within a new framework.

The marketing nous and multimedia approach to Gorillaz’s debut album was encapsulated in its bonuses and follow-ups. As well as the aforementioned extra tracks, and an enhanced segment on the CD, the French edition included an extra B-sides disc. These included The Sounder, featuring UK rappers Phi Life Cypher (who had also recorded versions of Clint Eastwood and the dub-inflected album track Starshine). The South Korean edition featured a video clip and games, while the Indonesian version even ventured into karaoke edits of some of the album’s singles. In 2002, the entire record received a dubwise revamp from Spacemonkeyz, Laika Come Home, while the singles’ B-sides were strong enough to be almost immediately compiled into the G Sides compilation.

Find out which Gorillaz album ranks among our best 2000s albums.