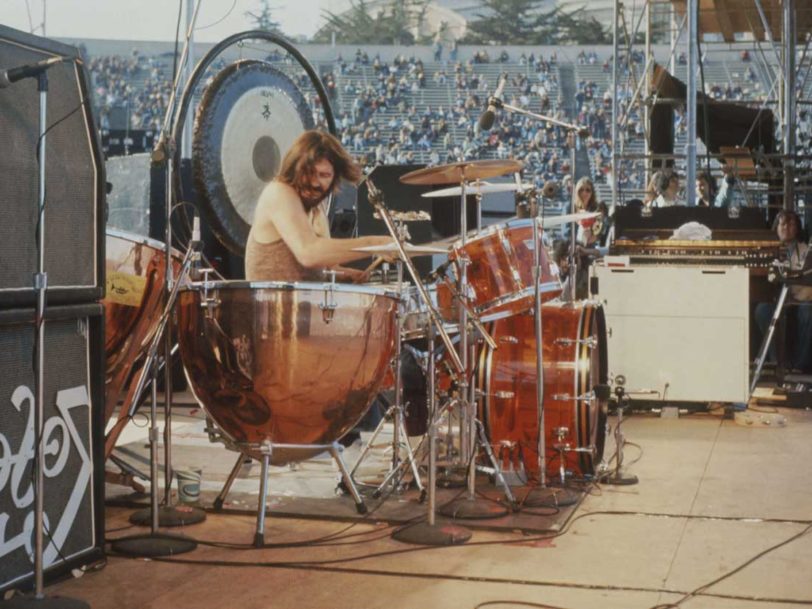 Renowned for his powerhouse performances, the best John Bonham songs prove why the late Led Zeppelin’s drummer is still king of the kit.

No less a figure than Dave Grohl recently told Rolling Stone, “I think John Bonham will forever be the greatest drummer of all time,” and it’s hard to disagree with such a heartfelt testimonial. After all, while the late Led Zeppelin drummer could summon up the mightiest percussive thunder, he also had jazzy syncopation off pat, could hold a groove like no other hard-rock drummer on the planet, and boasted precision timing. The man best known as “Bonzo” really had it all, so let’s give the drummer some and get on the beat with the best John Bonham songs.

Listen to the best of Led Zeppelin here.

John Bonham immediately showed off his talents on Good Times Bad Times, the opening cut from Led Zeppelin’s self-titled debut album. Leading off with a dramatic, two-beat opening gambit, he then put his whole kit through its paces throughout the song. It’s all mightily impressive, but what particularly stands out is Bonham’s kick-drum work. Unlike many of his contemporaries, he stuck with a single-pedal set-up, yet on Good Times Bad Times he plays what are effectively double-kick beats executed with an almost supernatural level of control.

Four Sticks’ title is meant to be taken literally – it relates directly to Bonham’s performance, for which he literally held two sticks in each hand. Once again, we can only marvel at Bonham’s dexterity here: he makes like a jazz octopus with a relentless tribal pounding that shadows Jimmy Page and John Paul Jones’ ominous riffing, and never once threatens to lose the song’s momentum. Having said that, the track’s strange time signatures (it shifts from 5/8 to 6/8) taxed all concerned, and it was seldom played live. Indeed, a performance of Four Sticks from Copenhagen in 1971 is believed to be the only existing live evidence of this contender among the best John Bonham songs.

Even certain band members have expressed their dislike of Houses Of The Holy’s light-hearted, reggae pastiche, D’Yer Maker. Yet while it may have been a relatively tongue-in-cheek track, it provoked an inspired performance from John Bonham. The drummer’s initial arrival (an explosive fill around snare and toms) immediately lifts the song and he continues to elevate it from thereon in. Bonham earned himself a lead songwriting credit for his efforts – an entirely fair result.

Anyone labouring under the misapprehension that John Bonham was a meat’n’potatoes basher needs to listen to Fool In The Rain from Led Zeppelin’s studio swansong, In Through The Out Door. Bonham’s syncopation and busy hi-hats are a feature of the track from the get-go, but the Latin-tinged percussive fiesta that kicks in around the 2.30 mark is both sublime and breathtakingly dextrous.

A gospel-tinged blues song with a labyrinthine history, In My Time Of Dying was recorded by Blind Willie Johnson in 1927 (as Jesus Make Up My Dying Bed) and came to Led Zeppelin’s attention via Josh White, Charley Patton and Bob Dylan, the latter of whom recorded it in 1962 for his self-titled debut album. Zeppelin took the song right back to the bayou, with Jimmy Page’s stinging slide guitar and Bonham’s relentless drumming both standing out on the marathon 11-minute cut that closes Physical Graffiti’s first side of vinyl. It earns its place among the best John Bonham songs at around the seven-minute mark, when the drummer unleashes a barrage of truly brutal power.

The Ocean is famous for Bonham’s immortal count-in: “We’ve done four already and now we’re steady.” He then follows through with an imperiously funky drum track whose strategic fills offer Jimmy Page plenty of space for both riffs and solos. The Ocean simply smokes, and as it surges towards it conclusion, Robert Plant proclaims “So good!” in righteous acknowledgement of one of John Bonham’s finest performances.

Rock And Roll derived from a jam with The Rolling Stones’ “sixth” member, pianist Ian Stewart, during the early sessions for Led Zeppelin’s fourth album, held at Headley Grange in Hampshire. Bonham came up with the sizzling, cymbal-heavy introduction after jamming on Little Richard’s Keep A-Knockin, and both the subsequent power of his performance and his timekeeping is simply faultless from thereon in.

As a rule, the term “drum solo” is usually enough to have most self-respecting musicians (and music fans) running for the hills. However, there are a few exceptions, such as Ginger Baker’s Toad, which graced Cream’s Fresh Cream album, and John Bonham’s showcase, Moby Dick, which became a feature of both Led Zeppelin II and the band’s stage shows throughout their entire career. Originally known as “Pat’s Delight”, in tribute to Bonham’s wife, it’s actually great fun – four minutes of brilliance during which the drummer shakes, rattles and rolls his way through a percussive tour de force right up there with the best John Bonham songs.

Presence’s opening cut, Achilles Last Stand, is one of Led Zeppelin’s most complex compositions, running for over ten minutes with Jimmy Page adding multiple guitar overdubs. However, its epic ambition was matched by the primal power of its execution, with Bonham truly excelling himself throughout. Even his opening gambit (a single flam on his snare) is executed with unbridled force; from there on in, he’s simply unstoppable, peppering the song with rolls around the kit and playing so hard that at one point that you can actually hear one of his cymbals splintering.

In terms of sheer animalistic fury, Achilles Last Stand is surely John Bonham’s apogee, yet in terms of influence, his performance on When The Levee Breaks is simply unsurpassable.

One of rock’s most famous backbeats of all time, Bonham’s swaggering drum track – performed on a Ludwig kit – was captured by setting his gear up in the hallway at Headley Grange and recording his playing through microphones hung strategically up a flight on stairs. The track was then passed through to a pair of Helios F760 compressor/limiters and treated with a Binson Echorec – a delay effects unit also favoured by Pink Floyd in their early days.

Bonham’s monumental performance has since become one of the most-sampled in music, with his beats later appearing in tracks by artists as disparate as Beastie Boys, Mike Oldfield, Eminem, Massive Attack and Dr Dre. When The Levee Breaks sports an absolute beast of a drum track and, despite stiff competition, it stands head and shoulders above the rest in this run-down if the best John Bonham songs.