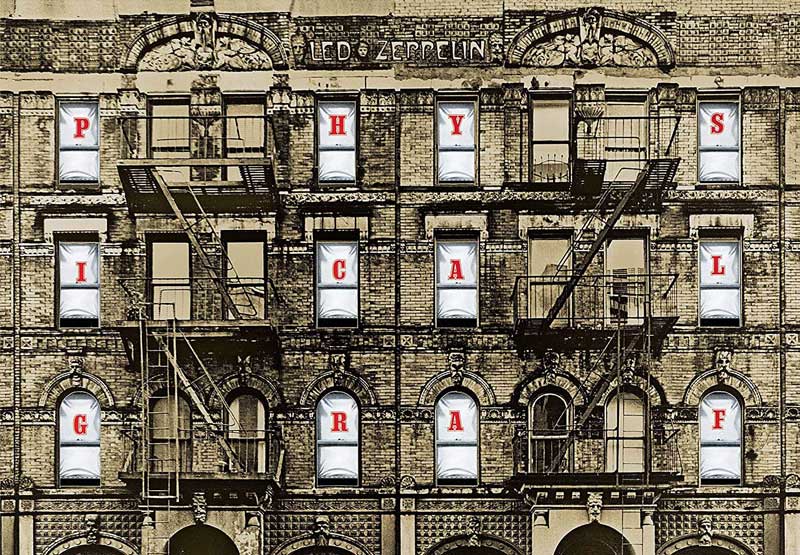 Physical Graffiti: How Led Zeppelin’s ‘Sgt Pepper’ Made A Mark On Rock

Formidable and lavishly-attired, the wide-ranging ‘Physical Graffiti’ album captured Led Zeppelin at the peak of their powers.

“A monumental piece of work”

Physical Graffiti still holds its own in such exalted company. The sound of a band at the very peak of their powers, it was – and remains – one of rock’s high-water marks, and its creators rightly feel it’s matured very nicely.

“All of us knew that it was a monumental piece of work, just because of the various paths we’d trodden along to get to it,” Jimmy Page told Rolling Stone in 2015. “It was like a voyage of discovery, a topographical adventure.”

Given one of Led Zeppelin’s typically lavish album covers, Physical Graffiti was housed in Peter Corriston’s elaborate die-cut sleeve depicting a New York tenement block. Clocking in at an ambitious 80 minutes, it was refreshingly free of filler and showcased the group at their most thrillingly diverse. The tracklist included a generous helping of their trademark gut-level rockers to go alongside the best Led Zeppelin songs (Custard Pie, The Rover, The Wanton Song), but also took in the everything from the sweaty funk of Trampled Under Foot to acoustic workouts such as Page’s Bron-Yr-Aur and complex, suite-like epics In The Light and Ten Years Gone.

“Some numbers would come out of thin air”

Unusually, the band had a head start when it came to recording Physical Graffiti, as they already had a small stockpile of notable material before the sessions began. Loosely based on Richie Valens’ 1959 single Ooh My Head and featuring The Rolling Stones’ pianist Ian Stewart, Boogie With Stu dated from the sessions for Led Zeppelin’s untitled fourth album, while the ferociously anthemic Houses Of The Holy and spontaneous, bluesy Black Country Woman were refugees from the sessions that led to 1973’s Houses Of The Holy.

Nonetheless, Zeppelin did much of the heavy lifting for Physical Graffiti during highly fruitful sessions at Headley Grange early in 1974. The band had recorded much of what became known as “Led Zeppelin IV” on location there in 1971 and were excited by the prospect of revisiting the 18th-century English estate in rural Hampshire.

“I knew what we could do at Headley Grange after having had such a rewarding and productive experience there before,” Jimmy Page told Rolling Stone. “I knew the secrets of what could be done there. Some numbers would come out of thin air down there, like for example… Trampled Under Foot, which came out of thin air like that, just starting out on a riff.”

A future live favourite with a Stevie Wonder flavour in its infectious groove, Trampled Under Foot developed from a jam session with John Paul Jones playing an especially funky line on the clavinet. Page’s slide guitar overdubs aside, the band’s intense, Delta-fried reworking of the gospel standard In My Time Of Dying was also nailed during the sessions, while Page was convinced the soon-to-be iconic Kashmir would be built around the unique sound Led Zeppelin could achieve at Headley Grange. Indeed, he already had the ideas for the main riff and the song’s memorable cascading brass part before he arrived in Hampshire.

“It was the first track where we actually heard the complement of a full orchestra on top of the brass and the strings,” Page explained in 2015. “We’d used strings on Friends, on the third album, just a small string session, but this was really something that was meant to be pretty epic and substantial.”

Kashmir came together with John Paul Jones adding Mellotron and scoring a dramatic string arrangement. After further overdubs at Olympic Studios in London, Physical Graffiti was in the can by the spring of 1974, with a planned release date of November that year to coincide with the band’s US tour. However, delays in the production of the record’s elaborate sleeve pushed it back several months, and it didn’t officially appear in the shops until the following February. In the meantime, the album became the first record in history to go platinum simply on advance orders – and it kept right on selling, topping the charts on both sides of the Atlantic and eventually moving a whopping 16 million copies in the US alone.

“I don’t know that Physical Graffiti was the pinnacle. It was the right album for the right time,” Jimmy Page reflected in a 2015 Record Collector interview.

“I was really keen to do a double-album, where the main aim was to show all the facets of a working band… Remember, at the time we were thinking of double-album as vinyl across four sides… I was conscious of the sequence, of how to give the next track a better impact, and I think I got that right… Every track had its own character. You could really set them all up and contrast them against each other.”

Find out which Physical Graffiti songs made our list of the best Led Zeppelin songs.