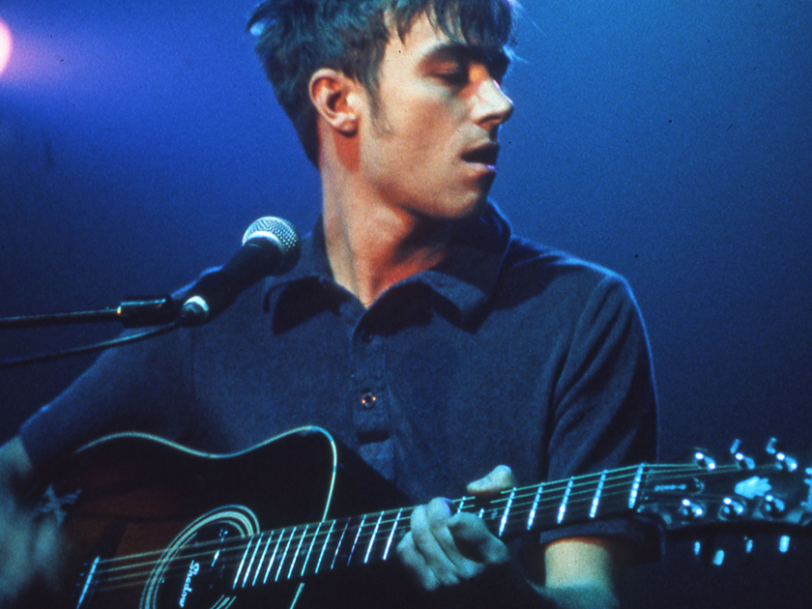 Beetlebum: Behind The Song That Saved Blur’s Career

A creative leap at a crucial moment, Beetlebum was the song that proved Blur could transcend Britpop’s trappings.

Blur may have won the “Battle Of Britpop” but, following the release of their fourth album, The Great Escape, they were on the verge of waving the white flag. Media scrutiny and the rigmarole surrounding their debut No.1 single, Country House – which had beat Britpop rivals Oasis to the top of the UK charts in the summer of 1995 – had led the four bandmates to a point of exhaustion – with their own observational pop songs, with the trappings of fame, and with each other. After taking time to regroup, and finding a safe haven in Iceland, away from the heat of the UK media’s glare, Blur returned in 1997 with the altogether harder-edged sound of their self-titled album, and, in the shape of its debut single, Beetlebum, a more open-hearted, personally revealing strain of songwriting from frontman Damon Albarn. Here is the story of how Beetlebum introduced the new-look Blur, and saved their career in the process.

Listen to the best of Blur here.

The backstory: “I wanted to aim for music that was so scarily powerful it would give people the shivers”

Just a few years on from minting a new strain of British songwriting with the Modern Life Is Rubbish (1993) and Parklife (1994) albums, Blur were living in separate parts of London, barely seeing each other outside of the obligations of their touring and promotional cycles. Speaking in the documentary No Distance Left To Run, Damon Albarn put it succinctly: “We didn’t really hang out anymore.”

Exhausted from touring The Great Escape throughout 1996, and dissatisfied with how the Country House promo video had turned them into lad-culture stereotypes, guitarist Graham Coxon wrote Albarn a letter, expressing his wish to take Blur in an entirely new direction with their next album. “We all felt the urge to give the music a jolt in the arm, and I wrote a letter to Damon explaining that more than anything I wanted to work the band harder and aim for music that was so scarily powerful it would give people the shivers again,” Coxon wrote in his memoir, Verse, Chorus, Monster! “I was afraid that Blur had become too easy to caricature. With Country House we had ridden the Britpop horse into the dust.”

A receptive Albarn agreed, and, as drummer Dave Rowntree remembered, the band “decided to give Graham a much freer hand” in shaping what would become their fifth album. Hoping to recapture some of the edge of Modern Life Is Rubbish-era songs such as Oily Water and Bone Bag, Coxon brought records by US alt-rock acts Beck and Pavement to initial recordings sessions held at London’s Mayfair Studios, using them to help indicate what he wanted the band’s new material to sound like. “I was thinking about tracks… which were less identifiably British, less to do with London or England, instead taking on board other influences from American hardcore and the more experimental ‘post-rock’ movement,” Coxon later wrote.

The recording: “Four guys in a room with no windows, kicking arse”

For his part, Albarn turned up with a cache of songs that veered away from the wry social critiques of Blur’s earlier albums. “When Damon sang me the songs on acoustic [guitar], like he normally does, there was the same kind of melancholy songs, and then we heard some of his little home demos, and he’s obviously gone off his head a little bit more,” Coxon said in 1997.

Among the demos was a new tune called Beetlebum, which bassist Alex James would later recall, in his book Bit of A Blur, was “written much the same way as we’d written everything, around a chord sequence or riff or melody initiated by Damon, four guys in a room with no windows, kicking arse”.

Taking the recordings to Stúdió Grettisgat, in Reykjavik, Iceland, Blur found themselves free to follow fresh ideas in a setting far removed from the London studios they’d known to date. From Coxon’s fuzzy riff to James’ fluid, looping bassline, the group developed Beetlebum into something that was recognisably theirs, but with a greater emphasis on the experimental rock that Coxon had been listening to. Writing in his Blur biography 3862 Days: The Official History, DJ and music critic Stuart Maconie noted, “Musically, the song’s antecedents would seem to be The Beatles, evident in the expansive middle eight where practically the album’s only harmonies nestle, and in the music of Krautrockers Neu!, which Damon and Graham had been dabbling in.” Hungover in the studio the morning after finishing the song, producer Stephen Street “played it back and thought, This is awesome.”

The meaning: “A lot of people’s lives was fairly muddied by heroin”

A little over a decade later, Coxon would note that “Damon’s songs at this point were revealing more to me than him”. Albarn, however, was reluctant to offer any explanations for his lyrics, waiting until he was a safe distance from the 90s before speaking openly about the meaning behind Beetlebum, and how the song had been influenced by his experience with heroin during this period. (“I thought everyone did [know],” he told The Guardian in 2012. “I thought everyone was just being really nice, and not making too much of a deal of it.”)

Attempting to parse the song’s lyrics, fans noted that, its nod to The Beatles aside, Albarn had lifted Beetlebum’s title from “Beetlebaum”, the name of a horse in comedian Spike Jones’ parody of the William Tell Overture, released as a single in 1948. But that did little to clarify lines such as “She’ll suck your thumb/She’ll make you come/’Cause she’s your gun/Now what you done/Beetlebum?”, which Albarn would describe as an attempt to capture an emotion that was both “sleepy” and “sexy”. In time, fans would come to associate the slang phase “chasing the beetle” with the song, using it to describe a way of ingesting opium by smoking it.

Pressed on Beetlebum’s meaning in the No Distance Left To Run documentary, Albarn admitted, “Well, that whole period of a lot of people’s lives was fairly muddied by heroin – for a lot of people. And it’s sort of, it’s in that place. And a lot of stuff was at that time.” To Q magazine, he would elaborate: “For me, it was incredibly creative. It freed me up… I somehow managed to break out of something with my voice. I can only say heroin was incredibly productive for me.”

The release: “We put some sort of spiritual distance between ourselves and the old whoopsie-daisy”

Albarn’s creative experimentation may have taken place in private, but in public it had become clear that Blur were reaching a whole new peak as a band. Released on 20 January 1997, as the lead single from their self-titled fifth album, Beetlebum was instantly received as one of the best Blur songs, debuting at No.1 in the UK and helping their acceptance in the US – a hitherto slow process eventually consolidated by Beetlebum’s follow-up single, Song 2, and reviews such as Rolling Stone magazine’s four-star critique of the Blur album, in which Beetlebum was singled out as “terrific” and “a rare Beatles tribute in that it remembers to include the Fab Four’s sex appeal”.

“I guess we put some sort of spiritual distance between ourselves and the old whoopsie-daisy, lah-di-dah, gor blimey,” Alex James later reflected of Blur’s surprise move into new musical terrain. And it was songs such as Beetlebum that paved the way for the bold art-rock of their 13 album. “It was a sort of new cycle after that,” James added. “Blur was, ‘When did those guys grow balls?’”

Buy Blur vinyl and more at the Dig! store.