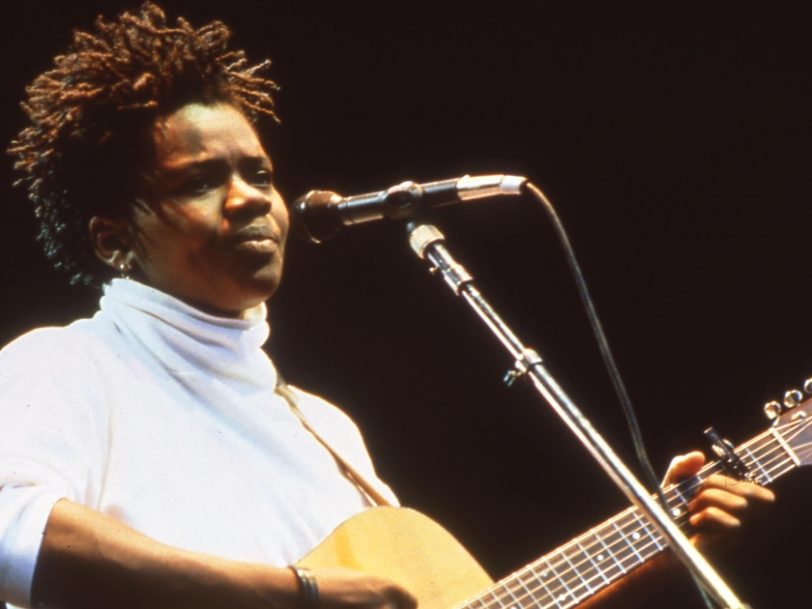 Speaking truth to a society that does not want to hear, Tracy Chapman’s self-titled debut album gave a voice to millions.

Tracy Chapman, the 1988 self-titled debut album by the US singer-songwriter, is much, much more radical than generally remembered. The phenomenal success of the album and its seminal lead single, Fast Car, has somehow blinded us to just how grave Chapman’s subject matter is, how biting her lyrics are; she is a Cassandra, speaking truth to a society that does not want to hear her.

“There you have a picture of a very independent person”

Tracy Chapman was, in some ways, a very traditional troubadour. She was a young, socially-conscious woman and a fixture in coffeehouses in the town where she was studying (Danbury, Connecticut). Her debut album was an outgrowth from this period of her life – all of the songs on the album, with the exception of Fast Car, came from an early demo tape. She was “discovered” by another student, who introduced her to his father, the head of a publishing company. A deal with Elektra Records followed.

But that’s where the well-trodden routes stop. What Tracy Chapman did, on her self-titled debut album, was to fuse two distinct approaches, and her genius was to go beyond the niche. Instead, she looked outwards, embracing accessibility, and in doing so her music gave voice to millions, many of them marginalised because of race, gender, class or sexuality.

“There is always something to do – hungry people to feed, naked people to clothe”

The first tradition that Chapman is from is perhaps the most obvious: protest music, equal parts feminist protest music and Black radicalism. Before she was famous, Chapman picked words from the African-American poet and spoken-word artist Nikki Giovanni to accompany her entry in her high-school yearbook. “There is always something to do,” Chapman quoted. “There are hungry people to feed, naked people to clothe, sick people to comfort and make well.” Giovanni’s work, alongside that of other uncompromising folk artists, are steel threads through Chapman’s debut album. “They wrote their own songs, they played them, they performed by themselves,” Chapman said in 1988, speaking of female folk singers in an interview for Rolling Stone. “There you have a picture of a very independent person.” Chapman’s debt to 70s women-only festivals, female-led record labels and wider feminist activism is there in her subject matter (including domestic abuse, sexual assault and women’s lack of opportunities), alongside her fierce independence.

The second tradition to birth Chapman’s debut album is found in pop and rock music’s working-class intellectuals: everyone from Dolly Parton to Mark E Smith, Johnny Cash to John Lydon. Like those artists, Chapman’s childhood poverty helped her develop a clarity about the societal systems that sustained despair, ignorance and prejudice. The community of Cleveland, Ohio, where Chapman grew up, was not only poor; it was also segregated and racially tense. “The city had been forced to integrate the schools,” said Chapman in 2008, looking back at her childhood. “They were bussing Black children into white neighbourhoods, and white children into Black neighbourhoods, and people were upset about it so there were race riots.”

The third track on Tracy Chapman’s self-titled debut album, Across The Lines, deals with this directly: white and Black children, transported to school, on the frontline of North America’s angry racism. Chapman saw clearly how aggression and resentment was maintained as poor people were forced to fight each other over scraps while being sold the dream of “mountains o’ things”, to quote another of the album’s songs. Chapman maintains compassion for even those who deal out violence, understanding that structural forces in society are beyond an individual’s control. Behind The Wall, for example, a track about overhearing domestic abuse, is as critical of the inert police response as it is of the man doling out the attacks.

Working hard for little reward is a theme everywhere on Tracy Chapman’s debut album, most strikingly on one of the best Tracy Chapman songs of all, Fast Car. The song’s narrator has to give up school to look after her alcoholic father; she works hard and dreams of escape; and when escape comes, she finds she is working harder than ever, only to live in a homeless shelter and support an alcoholic partner. For all this, the song is never depressing. The chorus, in which the narrator and her lover “speed so fast I felt like I was drunk”, is soaring. That scared yet elated feeling that comes with the realisation that it’s really going happen – our dreams can have a chance of coming true – is, amazingly, still there at the end of the song. Life never completely crushes hope. Talkin’ ’Bout A Revolution, the album’s opener and other huge hit, was Chapman making this plain. “Poor people gonna rise up/And take their share,” she sings. “Poor people gonna rise up/And take what’s theirs.”

The hope is there in her love songs, too. They are private but resilient. In For My Lover and For You, Chapman sings of her love, gently but firmly asserting her steadfastness in the teeth of opposition. Chapman’s refusal to be lyrically pigeonholed either into a straight or lesbian identity has meant that her love songs have gained a rare universality: witness Baby Can I Hold You, an album highlight and an enormous hit nine years later, when Boyzone covered it.

Musically, Tracy Chapman’s self-titled debut album is refined, not offering sonic anger to meet the lyrics. It weaves like spider silk around her still presence. This was exactly what she wanted, but she had to fight for it. She recalled in 2008 that the producer “put me in the middle of the room. [The band] were all around me, everyone was playing wildly because he gave them very little direction. And the music was horrible. Bombastic.” She had to directly confront the production company, who initially refused to understand her point of view.

She was right, of course. When the album was released, on 5 April 1988, people connected with Chapman’s straightforwardness and honesty, alongside her striving for better times. “There’s only so far you can push people before they push back,” she said at the time. “That’s where the things I write about come from. It’s wrong not to encourage people to hope or to dream or even to consider what’s thought to be impossible. That’s the only thing that keeps people alive sometimes.”