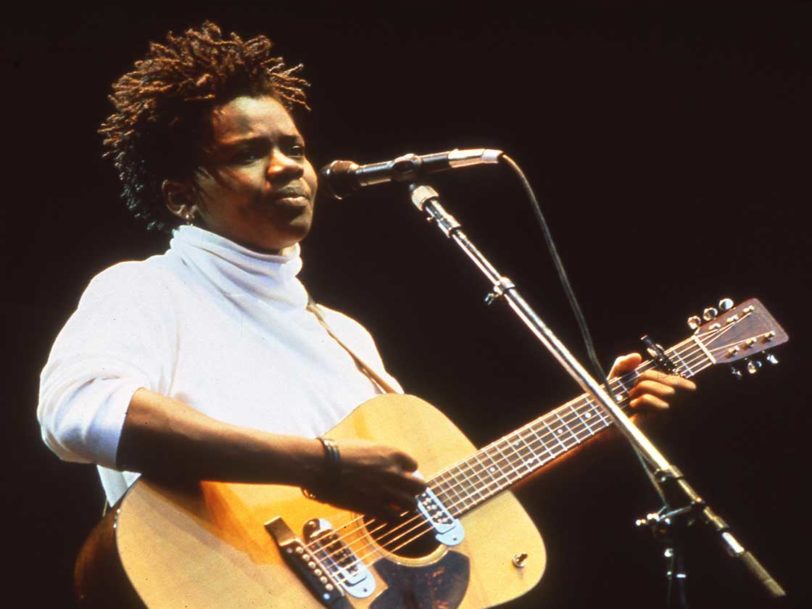 Looking for answers to all the big questions, the best Tracy Chapman songs form the basis of a formidable musical legacy.

The queen of protest pop, Tracy Chapman’s endearing yet audacious approach to her music has resulted in an influential body of work that spans three decades and eight albums. The best Tracy Chapman songs have brought influential explorations of change, love and political oppression into the mainstream. These ten tracks offer a place to start with that formidable legacy.

Entering the new millennium on a high, Chapman’s fifth album, Telling Stories, found her breaking an almost five-year silence. Highlighting Chapman’s inspirationally poetic way with lyrics (“There is fiction in the space between/You and everybody/Give us all what we need/Give us one more sad, sordid story/But in the fiction of the space between/Sometimes a lie is the best thing”), the album’s title track is a feel-good classic whose infectious musicality and effortless virtue can’t fail to make you move.

Juxtaposed with the better-known Baby Can I Hold You, also from the Tracy Chapman album, For My Lover characterises love as a crime as Chapman sings of being locked in jail and psychoanalysed for her choice of partner. Its 80s production blended with Chapman’s folk-flavoured nuances helped create the singer’s signature sound, while the lyrics fight against Chapman’s sense of being misunderstood as she sings of the bold things she would do – climb a mountain, risk her life – for love.

Self-critical and reflective, Change feeds the listener with a series of thought-provoking questions, coming straight off the bat with, “If you knew that you would die today/If you saw the face of God and Love/Would you change?/Would you change?” Though the song’s arrangement keeps it somewhat light-hearted, the lyrical repetition hammers the question home while guitar flourishes accent specific phrases in Chapman’s lyrics. It may raise existential worries, but Change shows that the best Tracy Chapman songs aren’t afraid of tackling the biggest subjects.

No stranger to speaking out about social injustice, Across The Lines finds Chapman exploring themes of racial inequality and its effect upon the American Dream. Drawing from her childhood experiences, Chapman makes the personal universal when she sings of a “little black girl” and “black boys” who grow up suffering from violence and racism. Though sung from the perspective of a young artist finding her feet, Across The Lines has a maturity and relevance that ensures its continued impact today.

Co-producing her second album with Tracy Chapman producer David Kershenbaum, Chapman took even greater control over her work. The perfect confessional opener for that record, Crossroads’ title track features many joyous similarities with Fast Car, though it also finds Chapman – who keeps close guard over her personal life – expressing misgivings over the attention that came with her almost immediate rise to fame.

A precocious 16-year-old Chapman sings of her difficult transition from Cleveland to boarding school in Danbury, Connecticut. Though she’d received a scholarship to study at Wooster School, an Episcopalian prep, she would later recall that “people at the school didn’t really have that much interest. I was really angry about that, and that’s where the song Talkin’ ’Bout A Revolution came from. Meaning that a lot of them thought that… people who didn’t have money or who were working-class, their lives weren’t very significant, and they also somehow couldn’t make a change. But I feel that’s where change comes from, that’s where people are in most need.” An empowering political anthem, Talkin’ ’Bout A Revolution remains one of the best Tracy Chapman songs – something her 16-year-old self may ever have imagined.

A song of longing, The Promise’s title explains it all: over a simple arrangement of guitar, bass and strings, Chapman expresses how she will always love and care for the person she sings of, if they do the same in return. It’s a promise of reciprocation love without question – and despite distraction – and is made all the more effective by Chapman’s less-is-more approach.

One of Chapman’s bluesier efforts, Give Me One Reason showcases the livelier side of her work. Fleshed out with backing singers, organ, guitar solos and more, the song went platinum on its way to receiving three Grammy nominations and winning a fourth (Best Rock Song). A defiant number in which Chapman seeks to provoke a lover into convincing her to stay, Give Me One Reason has flair, grit and bouts of charisma, and reveals that the best Tracy Chapman songs can also take a confrontational look at love.

A classic love song covered by everyone from Neil Diamond to Ronan Keating and Boyzone, Baby Can I Hold You reveals how Chapman’s conversational lyrics conjure a universal relatability. Everyone’s relationship with love is different, and here Chapman expresses a desire to be looked after and treated well, told the things she wishes to hear, and to maintain an intimacy and deep connection with her partner. It’s a tale as old as time – which is what makes Baby Can I Hold You timeless.

Undoubtedly her most recognised song, and the one that shot Tracy to stardom, the prodigious Fast Car pulls into view with an instantly recognisable guitar riff and Chapman’s natural way with a hook. Released as the lead single from her self-titled debut album, the song made Chapman a household name following a solo acoustic performance at Nelson Mandela 70th Birthday Tribute, which was broadcast to 600 million people live from London’s Wembley Stadium. “At the time that I wrote the song, I actually didn’t really know who I was writing about,” Chapman later reflected. “Looking back at it… I think that it was a song about my parents… And about how when they met each other they were very young, and they wanted to start a new life together and my mother was anxious to leave home. My parents got married and went out into the world to try to make a place for themselves and it was very difficult going.” Topping our list of the best Tracy Chapman songs, Fast Car outlines the struggle of an inner-city woman held captive by poverty and romantic self-delusion. At almost half a billion streams on Spotify alone, it’s a tale many listeners have connected with.