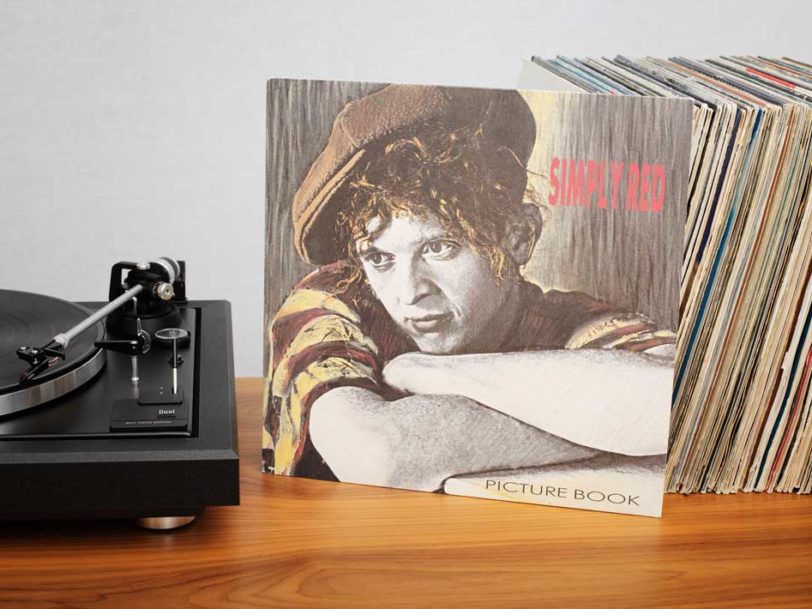 Luther Vandross. Alexander O’Neal. Mick Hucknall. Who knew that one of the best soul singers of the mid-80s would be from Manchester, in the North of England? One listen to Picture Book, however, the 1985 debut album by Simply Red, and you’ll hear a man turning a new page in his life – and establishing himself as an era-defining vocalist in the process.

A story worth recounting

If Picture Book offered a sort of story-so-far of Mick Hucknall’s life, it’s a story worth recounting. With a career that’s now into its fourth decade, Simply Red have been no strangers to success. Sixty million album sales – five of them UK No.1s – and a billion (and counting) YouTube views attest to a hit-rate that would make their contemporaries green with envy, but when Simply Red formed in 1985, the same year that Picture Book hit the shelves, Hucknall was pulling himself out of a life marked by deprivation. Not all great artists have to suffer, but Hucknall did – and he poured his experiences into one of the best debut albums of the 80s.

Abandoned by his mother when he was just three, Hucknall was a single child raised in a single-parent family, his father working as a barber to make ends meet. As a 16-year-old art school student, he was one of hundreds, if not thousands, who claimed to have been at Sex Pistols’ epochal 1976 Manchester Lesser Free Trade Hall concert – but one of around only 40 who actually were. The show may have led to the birth of The Smiths, Joy Division and the whole Factory Records stable, but where those artists developed a distinctly British working-class mindset, Hucknall looked across the Atlantic for inspiration from the soul and funk music of the 60s and 70s.

Traces of the Manchester scene’s post-punk movement bled into Hucknall’s first band, Frantic Elevators, but that voice wasn’t fooling anyone. Despite the melancholy bassline and stark guitar that frames their 1982 recording of Holding Back The Years, Hucknall’s vocals elevate the song from Manchester’s monochrome palette into something that, in the hands of his next group, would simply shine.

Re-recorded by Simply Red during the Picture Book sessions, and an eventual US No.1 and UK No.2 (it was released twice – first in 1985, before being reissued the following year), Holding Back The Years is now the stuff of newlyweds’ first dances the world over. When Hucknall wrote it, however, he was ruminating on his childhood – “Thinking of the fear I’ve had so long”; “Chance for me to escape from all I’ve known”. But that’s the trick that almost every song on Picture Book plays: an erudite songwriter, Hucknall was aware that, to get a hit you’ve got to move people’s hearts and feet. Often Picture Book may leave you thinking you’re dancing to a love song when you’re actually moving to something much more socially minded.

Opening with Come To My Aid, Picture Book immediately sets out its stall. “You’re as sweet as everything” Hucknall sings on top of a pop-funk backing characterised by Fritz McIntyre’s keyboards and Sylvan Richardson’s Nile Rodgers-like guitar. “Come to my aid, it’s you I’m thinking of.” Hucknall’s Lothario status is legendary, but stick around a little longer and you’ll find out he has socio-political concerns in mind: “In the poverty stakes see just what it means/When welfare decimates you’d better care/About your fellow people… Why is our nation divided?”

It’s a question Hucknall could still ask today – and one Picture Book keeps returning to. Jericho looks at the rich/poor divide through the eyes of an unscrupulous svengali, as if Simply Red were pre-emptively bracing against the music industry they would soon find themselves at the heart of. Consciously or not, Open Up The Red Box – in which Hucknall’s defiance spills over into vitriol – conjures images of the Chancellor Of The Exchequer posing for the press before announcing the UK’s annual budget, while No Direction paints a picture of the poverty that Hucknall, like many of his soul heroes, strove to rise above.

Money’s Too Tight (To Mention), however, is where political conscience and pop nous combined to perfection. Always destined to be left-wing standouts in Thatcher’s Britain, Hucknall and co set their sights on the US when they took on this 1982 R&B hit originally recorded by The Valentine Brothers. Denizens of Britain’s working-men’s clubs could all relate to the scene-setting opening – “I’ve been laid off from work/My rent is due/My kids all need/Brand new shoes” – but when Hucknall starts calling out then President Ronald Regan, his wife, Nancy, and “all kinds of bills/From down Capitol Hill” – not to mention briefly sounding like he might himself run for office – you get the sense that Simply Red weren’t just challenging Republicans’ political greed, they wanted to take the US by storm.

“The most prodigious voice this side of Motown”

And why not? If Picture Book proved Hucknall had “the most prodigious voice this side of Motown” (and “a burning socialist heart” to go with it), as Q magazine observed a decade after the album’s release, it also revealed Simply Red – at this point counting three former members of Factory Records’ The Durutti Column in its ranks – as a versatile outfit steeped in R&B history. Single B-sides Drowning In My Own Tears (which backed Holding Back The Years) and Granma’s Hands (Come To My Aid) saw them cover hits by Ray Charles and Bill Withers, respectively; these have now been gathered together with other lesser-known period gems on the digital EP Picture Book: B-sides & Rarities.

On Picture Book itself, second track Sad Old Red starts out as a swing-era floor-filler before Hucknall’s vocal teases out the group’s most restrained, late-night jazz backing. Elsewhere, a cover of Heaven – rendered with no small amount of existential angst by David Byrne, who had originally co-written the song as part of Talking Heads’ own new-wave take on whiteboy funk, 1979’s Fear Of Music album – is such a shimmering example of blue-eyed soul it’s practically azure.

Released on 11 October 1985, Picture Book went platinum in the US and UK (hitting No.2 at home, while cracking the Top 10 across Europe and Australia) and was retrospectively hailed as “the most accomplished debut of its year” by Q. Earning the group a Best New Artist Grammy nomination and a Best Pop Performance By A Duo Or Group With Vocals, for Holding Back The Years, the album remains a timeless piece of work that stops the clock for 45 minutes of nostalgia, contemplation and heart-stirring soul.

Picture Book has been reissued on vinyl, including a limited edition red vinyl pressing exclusive to Dig! Buy it here.