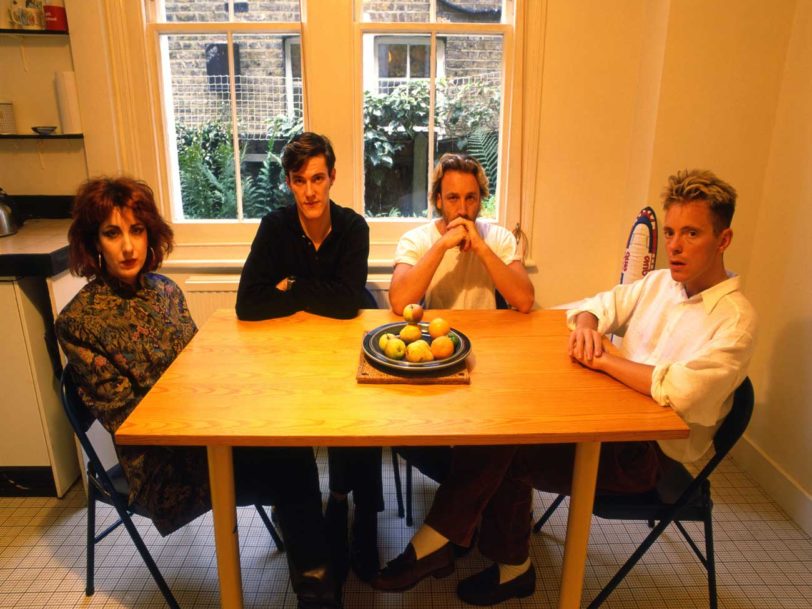 Substance: How New Order Changed The World In 7 12” Singles

Collected on the ‘Substance’ compilation, New Order’s 12” singles left a far-reaching impact on pop culture. These seven songs reveal why.

In his book Unknown Pleasures: Inside Joy Division, New Order co-founder Peter Hook writes, “You are very lucky in a group to change the world culturally and musically once. We were very, very lucky to manage to do it twice.” Changing the world “culturally and musically” might seem like a bold statement, but in the case of Joy Division and New Order, it’s completely justified. Between 1981 and 1987, they released a series of 12” singles that went on to form the Substance compilation: a cornerstone in music history.

Most bands would be sitting on at least a decade of material before they’d consider a retrospective compilation, but most bands aren’t New Order. To promote the collection they released a 12 Inches of New Order ruler, designed by frequent collaborator – and creator of their 12” artworks – Peter Saville, etched with each single’s track title.

The unique appeal of New Order’s singles during this period was their unpredictability. The 7” versions of their singles often featured different mixes or recordings to the 12” versions, and the singles were sometimes not featured on any of their studio albums. This level of variety is a key part of New Order’s appeal, making them one of the few bands where you’ll have a preferred version of each of their singles.

The impact of New Order’s 12” singles was far-reaching, not least in UK club culture, where they were frequent favourites during DJ sets. However, their influence wasn’t just felt on the dancefloor, but spread throughout the local Manchester music scene. The iconic Haçienda club was funded and propped up throughout its history by New Order and their equally iconic record label, Factory Records.

The tracklist for the original 1987 double-vinyl release of Substance lists the 12” singles in the order they were released through Factory Records. Here’s a breakdown of seven of those featured singles, one for each year that the compilation covers.

The true bridge between Joy Division and New Order, Ceremony was originally written by the former shortly before the death of Ian Curtis (a few Joy Division versions exist, which are pure magic in themselves). New Order re-recorded the song after Ian’s death, with Bernard Sumner taking over vocal duties. Given its history, it seems odd to class Ceremony as a debut single, but it is undoubtedly one of the greatest debut singles of all time.

The arpeggiated synth backline, the bouncing sharpness of the drums – Temptation is New Order at their very best. The song wasn’t created that long after Ceremony, yet it marks a complete shift in their sound, from sparse and guitar-led to layered and synth-led. This is also the first of their 12” singles where Sumner has found his own singing style, rather than imitating Ian Curtis’.

The New Order 12” that had the biggest impact on the dance music world, Blue Monday still sounds as fresh today as it did almost four decades ago. It also still remains the best-selling 12” single of all time – and, due to its die-cut sleeve, one of the most expensive to produce. It’s one of those rare, game-changing musical moments where all the disjointed parts come together and make something special.

Synths that really sound like synths. Thieves Like Us is precision-engineered pop in the best possible way. Peter Hook’s trademark bass can still be heard weaving its way throughout the track, but the lyrics and the warmth of the synthesisers make Thieves Like Us an essential moment in New Order’s career. Having previously released 12” singles designed with the dancefloor in mind, this is another successful step into different territory.

Whil the album version of the track is under five minutes long, the full 12” version – and it’s glorious accompanying video – is the true masterpiece. Every member of New Order is at the top of their game on The Perfect Kiss, with Sumner’s lyrics fitting perfectly with the energy of the track. The musical ambition and energy throughout are palpable, and just when you thought there weren’t enough layers of sound in the mix, there’s a break with frogs croaking.

Bizzare Love Triangle is unforgettable. The 12” version builds with orchestra hits and drum pad stabs until all the elements come together in a tightly wound bundle that never veers off course. Choral synth effects would seem like a step too far in most tracks, but here they’re key to the song’s power. It’s one of New Order’s most influential tracks, being covered by a whole host of artists over the years – including a truly awful version by The Black Eyed Peas.

Originally recorded in specifically for the Substance compilation, the True Faith 12” single stands its own ground when it’s piled in with the rest. The chorus is one of New Order’s strongest and, again, saw the band moving towards different territory. This isn’t a dancefloor classic, nor is it a stripped-back synth track. Lyrically, it’s reflective, but it retains a driven energy throughout.