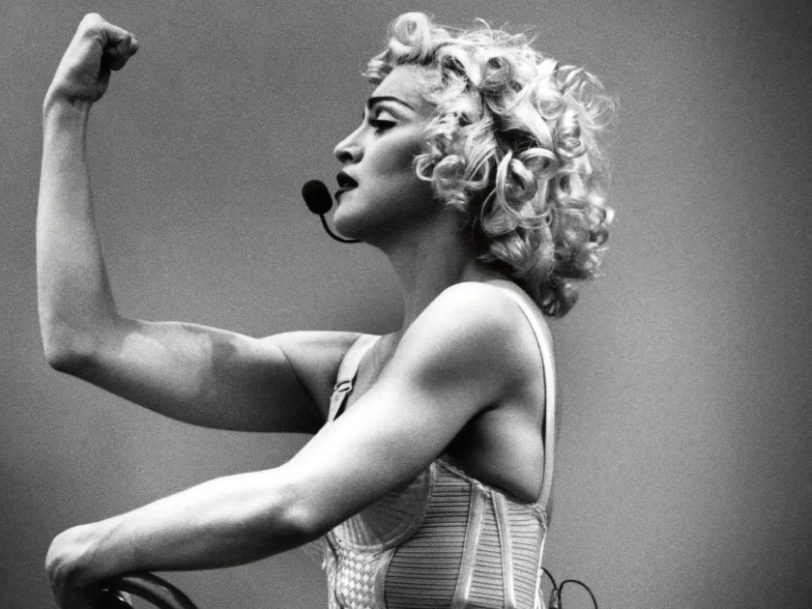 ‘Like A Virgin: How Madonna Proved She Had The Touch

Pairing up with Chic’s Nile Rodgers, Madonna created ‘Like A Virgin’, arguably the most significant record ever released by a woman.

It’s now hard to imagine just how enormous a success the Like A Virgin album was on its November 1982 release. Delayed by months because the singles off her self-titled debut album continued to dominate the charts, it sold more than three million copies in its first 14 weeks in the US alone, and worldwide sales would soar above 21 million in the months ahead as Madonna Mania swept the planet, one territory after another.

The light soul-disco of her debut album was here now beefed up by the chunky pop production of Chic mastermind Nile Rodgers, in particular on two smash singles that would define the “Queen Of Pop” for decades ahead. Interestingly, both were composed by other writers, proving that Madonna was shrewd enough to work on material that powered forward her agenda, whatever the songs’ origin. There was no room for ego at this critical moment.

Material Girl, which opens the record, features a light synth-reggae shuffle that makes the song so familiar, but the song is largely memorable for its arch, iconic narrative and the standout video that accompanies it. Madonna might have later regretted its tongue-in-cheek irony, but there’s no doubting its contribution to her legend. Angel, another single, is perhaps a throwback to the lighter material of her first album, but is one of four Like A Virgin co-compositions with Stephen Bray, who is one of Madonna’s most significant early collaborators (and who would also pen Into The Groove, which was later added to the album after the phenomenal success of Madonna’s first hit film, Desperately Seeking Susan).

Like A Virgin’s title-track, with its bassline nod to Michael Jackson’s then recent mega-hit Billie Jean, was the single that broke Madonna worldwide after her showstopping performance at the very first MTV Video Music Awards – and, of course, following the release of that memorable music video, directed by Mary Lambert and shot in Venice. The song became a Christmas No.1 in the US and made the Top 3 almost everywhere else, marking the last time Madonna would be forced to trek round the world’s TV studios for appearances on shows such as the BBC’s Top Of The Pops. After this single, she was simply too famous for that sort of routine promotion.

The pop-dance of the other three Stephen Bray songs – Over And Over, Stay and Pretender – offer a type of musical ballast around the big hits while adding to a frenzied collection of urgent pop-dance, offering solid, nagging melodies that might have made single release if the remainder of Like A Virgin hadn’t been so uniformly strong. In Shoo-Be-Doo, with Madonna as the sole author, you can catch her understanding of the Motown pop-soul sound that shaped much of her early musical inspiration. The more demanding performance theatre and avant-garde leanings of the decades ahead were yet to develop, but it’s clear Madonna knew how to hook the listener’s attention with a decent melody. Nile Rodgers builds around this and the album’s other cuts with some percussive depth and some lighter rhythmic highlights that create a sparkling contemporary pop gloss over the whole record.

The most significant record every released by a woman

On a cover of Rose Royce’s Love Don’t Live Here Anymore, Madonna’s choice to record with an orchestra signalled early promise that her range would easily outpace critics’ expectations in the years to come. The song received a single release in Japan and was later resurrected as a wider single to promote 1995’s ballad collection Something To Remember, with a video finally shot on a rare day off from filming Evita.

In Dress You Up, the final single from Like A Virgin, you have, arguably, the album’s sharpest time capsule. With a video recorded on one of the dates from her debut US tour, it catches Madonna at the peak of her early fame. The song bursts with charisma and drive courtesy of a hook-heavy synth-pop appeal that’s among the highlights of her early catalogue.

Released on 12 November 1984, Like A Virgin’s addictive energy makes it the stuff of legend. As Madonna wannabes became a cultural phenomenon, and the star’s dazzling video persona redefined what it was to be a female artist, this album sat in the eye of the hurricane – arguably the most significant record ever released by a woman. In an era long before #MeToo, Like A Virgin showed that Madonna was calling all the shots. The world would forever dance to her inspiration.