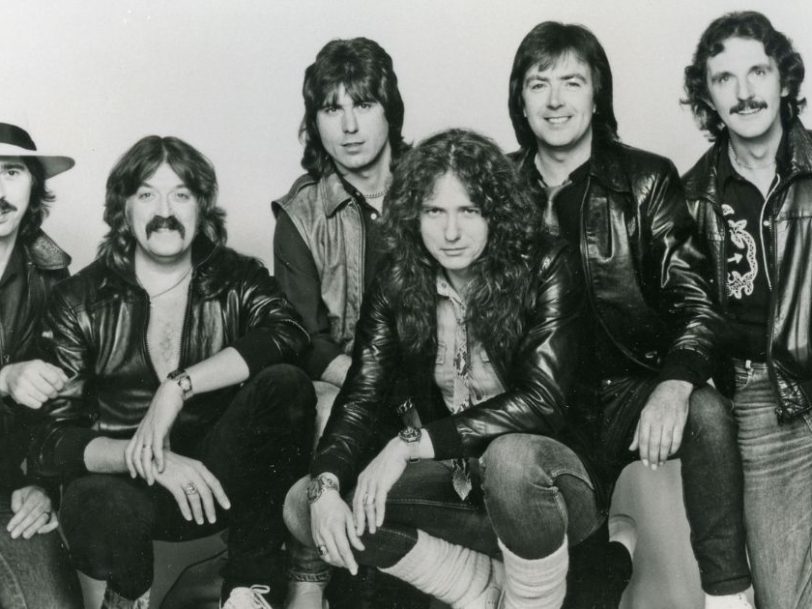 The old adage tells us never to judge a book (or, in this case, a record) by its cover. But while that may not quite hold for the worst album covers in the world, it’s sage advice where Whitesnake’s second album, Lovehunter, is concerned. First released towards the end of 1979, it rewarded the band with their first UK Top 30 success, but that achievement is often overlooked because of, well… that sleeve.

“What he wrote was completely tongue-in-cheek”

They were different times, of course, but even in the notably less PC-inclined late 70s, an album cover depicting a naked woman straddling the coils of a giant serpent was asking for trouble. Criticism came courtesy of music writers such as Sounds’ Robbi Millar, who noted that the sleeve led to the discussion of sexism in hard rock being “batted around like an out of control tennis ball”.

It didn’t help the band’s cause when frontman David Coverdale came out fighting in a subsequent Sounds interview with a more sympathetic journalist, Phil Sutcliffe. In the resulting feature, the singer was quoted as saying, “We’re exercising the male fantasy of being a peacock and strutting. We are playing cock-rock. We are bathing in innuendo.”

“David believed those things was alright [to say] because he’d convinced himself they were,” lead guitarist Bernie Marsden told Classic Rock four decades later. “That said, there were times when Jon [Lord, keyboardist] and I would see something he’d said in the Melody Maker or whatever and we’d wrinkle our noses. But David was the singer and he did the interviews.”

Speaking in 2019, Marsden acknowledged that he “can understand” the accusations – which also extended to Lovehunter’s lyrics. Admitting that the rest of the band “didn’t really take a lot of notice of the lyrics”, the guitarist also felt that some of Coverdale’s finer moments got overlooked in the controversy: “David wrote some magnificent ones like Ain’t Gonna Cry No More. What people didn’t realise was that what he wrote was completely tongue-in-cheek.”

“We argued about things because they really mattered”

With hindsight, it’s a pity the controversy raging over artist Chris Achilleos’ notorious Lovehunter album cover has obscured the record’s contents. In fact, the album inside the sleeve reveals itself to be the one where Whitesnake’s initial line-up really begins to gel – and it points the way to the mainstream success the band would attain with their third album, 1980’s Ready An’ Willing.

To realise Lovehunter, Whitesnake repaired to Clearwell Castle, the 18th-century estate in the Forest Of Dean where Led Zeppelin held initial sessions for their In Through The Out Door album. The surroundings were already familiar to David Coverdale and Jon Lord – both of whom were major players when Deep Purple visited Clearwell to prepare for their mid-70s albums Burn and Stormbringer – and they invited another long-time Purple associate, producer Martin Birch, to oversee the creation of their new record.

Birch – who later helmed many of the best Iron Maiden songs – was referred to as “Headmaster” by most of his clients, as he was renowned as a paragon of efficiency in the studio. He had a sense of humour (Clearwell was allegedly haunted, and Birch enjoyed piping spooky sounds into the band’s headphones as the tapes rolled), but his disciplined methods ensured the sessions ran smoothly, and Lovehunter emerged featuring a clutch of Whitesnake’s most enduring tracks.

“We went down an absolute storm”

The album’s primary lingua franca was the potent, blues-tinged hard rock with which this initial iteration of Whitesnake excelled. It kicked off in fine style with the anthemic Long Way From Home and continued to play to the band’s strengths on adroitly executed, radio-friendly rockers such as Medicine Man and You’n’Me – all of which featured punchy ensemble performances and expressive, yet never histrionic, solos from Bernie Marsden.

The record also included a compelling version of the urgent live favourite Walking In The Shadow Of The Blues, and if Coverdale leant a little heavily on the innuendo on Lovehunter’s lascivious title track, then the balance was soon redressed by the classy, Free-esque ballad, Help Me Thro’ The Day and the tender We Wish You Well, with the latter providing the record with the fondest of adieus.

Whitesnake were confident they’d come up with the goods on Lovehunter, and that feeling was confirmed when they debuted some of the songs live at August 1979’s Reading Festival – a potent performance which convinced the band they were heading in the right direction with a collection of the best Whitesnake songs in tow.

“The band got better and more successful”

“We went down an absolute storm, and that made a big difference,” Bernie Marsden told Classic Rock. “We sold a lot of records when [Lovehunter] come out. Ian [Paice, drummer] was yet to come, but Jon had already joined and it made us think, Maybe we’re a bigger band than we thought.”

As Marsden recalls, Lovehunter did indeed open doors for Whitesnake following its release, on 1 October 1979. Though not a major hit, its lead single, Long Way From Home, enjoyed decent airplay and – in conjunction with the band’s burgeoning live reputation – helped the album climb the UK charts; it ultimately peaked at No.29, offering David Coverdale’s team the first glimpse of the more substantial success lurking around the corner.

“Back in those days Whitesnake really was a collective,” Marsden said in 2019. “We argued about things because they really mattered… And because of that the band got better and more successful with Ready An’ Willing and Come An’ Get It. But Trouble and Lovehunter were really good records.”