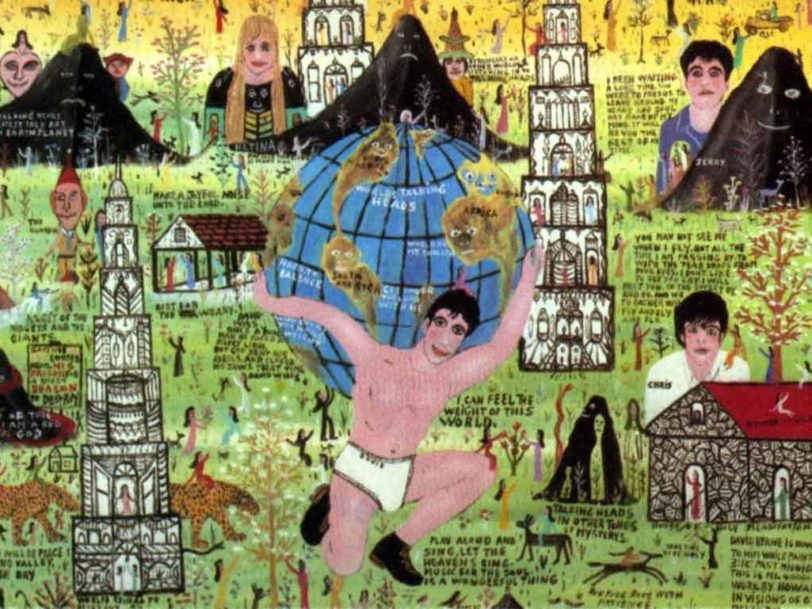 Talking Heads’ most straightforward and relatable album, ‘Little Creatures’ was also their biggest-seller. It endures to this day.

By the time Talking Heads released their sixth album, Little Creatures, in June 1985, their fans had become accustomed to expecting the unexpected. Since the release of their debut, Talking Heads: 77, in 1977, the band had consistently defied expectations – they were more melodic and dancefloor-friendly than the punks they were initially lumped in with; they’d made increasingly funk-inspired and avant-garde music as their popularity grew; and with 1984’s spectacular Stop Making Sense, they’d redefined the concert film. But Little Creatures was the biggest gear-shift yet. Talking Heads had made a conventional pop album.

“I’ve gone the long way around”

While previous albums had increasingly seen the band work their material up from jams, taking inspiration from the likes of Afrobeat pioneer Fela Kuti and 70s funkonauts Parliament, this time frontman David Byrne arrived at the Little Creatures sessions with songs already written, as drummer Chris Frantz explained in his 2020 memoir, Remain In Love: “For the first time, David brought us demos of songs he had written, at least for the most part. These demos, recorded on a cassette, were not the wild and funky polyrhythmic songs of Remain In Light or Speaking In Tongues. In fact, they were a return to singer-songwriter-type songs with a heavy dose of Americana thrown in.”

In a profile in The New York Times, published as the band were recording the new album, Byrne explained, “I’ve gone the long way around and come to accept almost the conventional song structure as a valid way of working.”

On Little Creatures, Talking Heads cast aside the edgy and claustrophobic textures of Fear Of Music, the looped grooves and African rhythms of Remain In Light and the bugged-out funk of Speaking In Tongues. Album cut Creatures Of Love was given a countrified, shuffling treatment, complete with flourishes of pedal steel courtesy of Eric Weissberg, most famous for his playing on Duelling Banjos, the unforgettably sinister theme from the 1972 thriller Deliverance. Elsewhere, The minor-key verses of Give Me Back My Name could so easily have settled into a brooding storm, but were lightened by Byrds-like jangling guitars, while third single And She Was delivered an infectious piece of bubblegum pop. Road To Nowhere, the album’s calling card, deployed a stirring gospel choir and accordion from zydeco player Jimmy Macdonell.

Loosening up obviously had an effect on the band’s performances. Released on 10 June 1985, Little Creatures is a direct, joyful-sounding album. As bassist Tina Weymouth told The New York Times, “It’s so much fun to be able to relax and just play without feeling you have to be avant-garde all the time. We spent so many years trying to be original that we don’t know what original is anymore.”

“He was singing more comfortably than ever”

Just as striking a change came with David Byrne’s new approach to vocals. As Frantz recalled, “He was singing more comfortably than ever. For once he was writing vocal parts that were within his singing range. He had taken to a crooning style that was very different from the jittery, squawking and yelping sounds he had sung in our earlier days.”

This was reflected in Byrne’s lyrics. Whereas, early on, he’d viewed human relationships with an alien-like detachment (on I’m Not In Love, from Talking Heads’ second album, More Songs About Buildings And Food, he’d pondered, “What does it take to fall in love?/Do people really fall in love?”), Little Creatures saw a softening of his perspective. Married bandmates Weymouth and Frantz had recently started a family, and Byrne seemed preoccupied with the wonders of creation, singing on Creatures Of Love, “Well, I’ve seen sex and I think it’s alright/It makes those little creatures come to life/Little creatures of love/With two arms and two legs/From a moment of passion/Now they cover the bed.” Meanwhile, the bouncy and playful Stay Up Late saw Byrne adopt the role of a goofy uncle.

Little Creatures’ closing track, the astonishing fusion of gospel and marching band that is Road To Nowhere, typified Talking Heads’ new approach. An infectious contemplation of mortality, the “we” in the lyrics is telling – Byrne was no longer an observer; he was in this, too. The song helped Little Creatures become the band’s biggest-selling album, with over two million copies sold in the US alone, and pointed the way to their next move, the melodic pop of 1986’s True Stories.