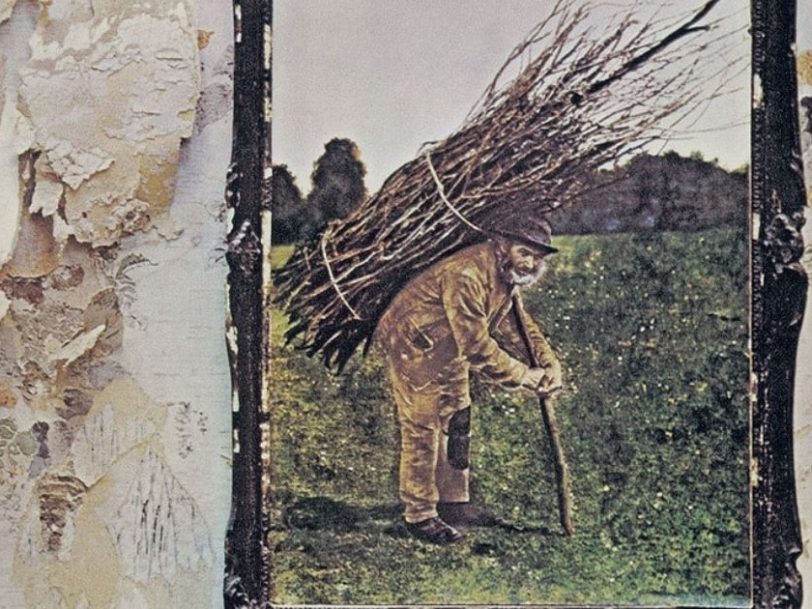 In the same way that The Beatles “The White Album” isn’t that record’s official title (it’s technically called The Beatles), the Led Zeppelin album we all refer to as “Led Zeppelin IV” was actually issued without a title at all – or else it was referred to informally as “Four Symbols”, “ZoSo” or “Runes”, due to the runic symbols printed on its inner sleeve.

On hearing that Led Zeppelin wished to release their fourth album in a wilfully enigmatic sleeve featuring such a paucity of information, those around the band went into a blind panic – one adviser even told guitarist Jimmy Page that such a move was tantamount to “career suicide”. Yet the band stood their ground and their will eventually prevailed. The upshot: “Led Zeppelin IV” received widespread acclaim and has since moved upwards of 37 million copies despite the group’s refusal to compromise.

“We were living in this falling-down mansion, and it was incredible”

This compulsive desire to break new ground typifies everything about “Led Zeppelin IV”, which is still the biggest and most critically lauded title in Led Zeppelin’s mammoth catalogue. Indeed, it wasn’t just the fact the record came housed in a mysterious design that still stands tall among the best Led Zeppelin album covers – the music within was rich in its diversity, and it was captured using some fittingly innovative methodology.

Crucially, while the initial recording sessions took place at Island Studios in London, most of “Led Zeppelin IV” came together when the band moved out of the city to Headley Grange, in the Hampshire countryside, in January 1971. A rambling manorial complex which in previous centuries had been a workhouse for the poor, the Grange offered a live-in situation where the group could write and record whenever the creative juices began to flow – and they’ve freely admitted that the surroundings coloured the way “Led Zeppelin IV” turned out.

“Most of the mood for the fourth album was brought about in settings we had not been used to,” Robert Plant told Classic Rock in 2020. “We were living in this falling-down mansion in the country, and it was incredible.”

“I really wouldn’t change a thing about ‘Led Zeppelin IV’”

The band had hired The Rolling Stones’ mobile recording truck for the sessions, and the lack of distractions in their rural idyll allowed them to focus on work. The Stones’ unofficial sixth member, pianist Ian Stewart, arrived with the truck and a battered old upright piano, and his presence led the group to work up one of “Led Zeppelin IV”’s key tracks in a matter of minutes.

A gifted musician with a love of old-style rock’n’roll, Stewart added a Jerry Lee Lewis-style roadhouse piano riff to a Little Richard-influenced drum part John Bonham hammered out during an early jam session, and it led to the creation of the song Rock And Roll: a belting, Sun Studios-style rocker which would go on to open Led Zeppelin’s live set for the next three years.

“We were recording something else when John Bonham started playing the drum intro to Keep A-Knockin’ by Little Richard, and I immediately started playing the riff for Rock And Roll,” Page later recalled. “Instead of laughing it off and going back to the previous song, we kept going.” After frontman Robert Plant came in with the lyrics, the song was done in 15 minutes.

Similar acts of serendipity contributed to the completion of several other “Led Zeppelin IV” highlights – many of which still stand among the best Led Zeppelin songs. Swaggering rocker Black Dog took its name from the old black Labrador the band took to feeding after they saw it wandering around outside the Grange. The cyclical – and literally titled – Four Sticks fell into place after John Bonham picked up two drumsticks in each hand and worked up the track’s complex percussive tattoo. The dramatic, folk-flavoured The Battle Of Evermore (for which Plant recruited Fairport Convention’s Sandy Denny for a decisive vocal cameo) took shape after bassist John Paul Jones devised the song’s haunting mandolin riff.

However, while Headley Grange’s atmosphere seeped into the DNA of “Led Zeppelin IV”, the building’s hallway – referred to as the Minstrel’s Gallery – played an even more direct role in the creation of John Bonham’s gargantuan drum sound on Led Zeppelin’s bleak, hypnotic reimagining of the old Memphis Minnie blues song When The Levee Breaks.

Having noticed that the sound in the hall bounced around as if in a bowl and echoed back up three flights of stairs, engineer Andy Johns decided to try an experiment. “The other guys were out having a drink, and John Bonham and I were at the house,” Johns told Classic Rock. “He complained that he wasn’t getting the sound he wanted. I finally said to him, ‘I’ve got an idea.’ We got his drums and put him in the hallway and then hung two mics from the staircase and pointed them towards the kit. I remember sitting there thinking it sounded utterly amazing… He shouted: ‘Whoah, that’s it! That’s what I’ve been hearing!’”

“What you’re hearing on the record is the sound of the hall with the stereo mic on the stairs, second flight up,” Jimmy Page added. “There was a lot of different effects in there. Phased vocal and a backwards-echoed harmonica solo. I’d used backwards echo as far back as The Yardbirds’ days.”

Bonham’s remarkable performance on When The Levee Breaks would later become the most sampled drum sound of all time. First used by Beastie Boys in 1986 (on their debut album’s opening cut, Rhymin & Stealin) and subsequently pilfered by numerous house music DJs in the late 80s, it’s since appeared on hundreds of hip-hop and dance tracks in different guises. Yet while When The Levee Breaks would help cross-fertilise future genres of music, “Led Zeppelin IV”’s most epic track, Stairway To Heaven, would become widely hailed as one of the best rock songs of them all.

“It crystallised the essence of the band”

Unlike much of “Led Zeppelin IV”, Stairway To Heaven was largely captured at Island Studios, before and during the band’s sojourn to Headley Grange. “I’d been fooling around with my acoustic guitar and came up with the different sections, which I married together,” Page told Classic Rock. “So I had the structure and then I ran it through Jonesy. I’d had the chord sequence pretty much worked out, and Robert came up with about 60 per cent of the lyrics on the spot.”

“Jimmy had the tune pretty much worked out,” Andy Johns added. “He played acoustic in the isolation booth. He was the thread that held it all together. We had Bonzo out in the main room and John Paul played a Hohner electric piano.”

A seamless yet still somehow unclassifiable amalgam of prog, folk-tinged pop and hard rock, Stairway To Heaven still fights it out with the equally ubiquitous Whole Lotta Love as Led Zeppelin’s signature song. Its relative merits have since polarised opinion within the group, though, in a 1975 interview with Rolling Stone, Page enthusiastically admitted the song “crystallised the essence of the band”.

“The most impressive success of their career”

Led Zeppelin’s fans agreed and, while Stairway To Heaven was never officially released as a single on vinyl, it soon became the most requested song on FM radio in the US, ensuring that “Led Zeppelin IV” remained in the Top 40 for six months following its release, on 8 November 1971.

It was a similar story in the UK, where the album sailed straight to No.1 and stayed on the chart for 90 weeks, with Richard Branson’s then newly established Virgin Records setting up special stalls in order to sell copies and keep up with demand. In their desire to embrace new sounds, Led Zeppelin had willingly gone out on a limb, but their belief in their abilities had paid dividends – something that biographer Dave Lewis later acknowledged when he declared “Led Zeppelin IV” to be “the most durable seller in their catalogue and the most impressive critical and commercial success of their career”.

“We had great faith in what we were doing, and now I’ve really fond memories of those times,” Jimmy Page told Raised On Radio in a 2018 interview. “The album was made with such a great team spirit, and everyone had a smile on their face all the time. Looking back, I really wouldn’t change a thing about ‘Led Zeppelin IV’.”