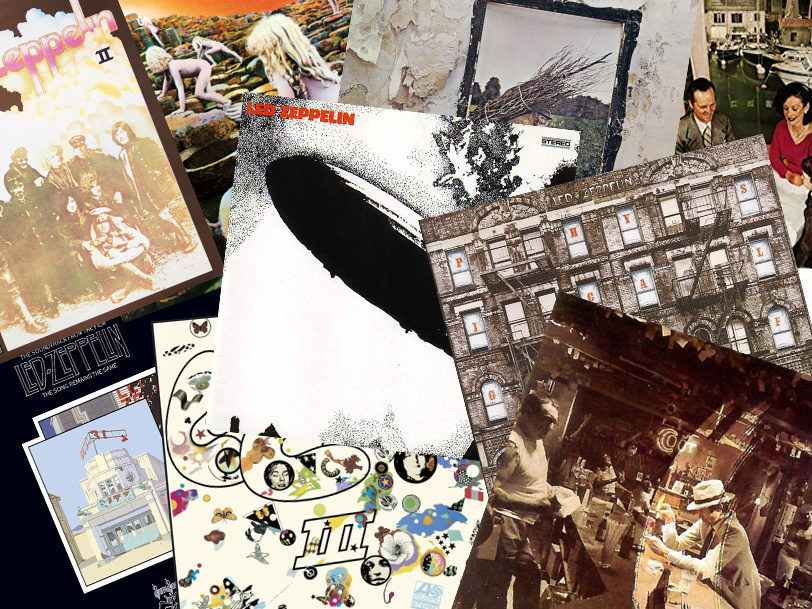 With help from some cutting-edge designers, the best Led Zeppelin album covers have become some of rock’s most era-defining artworks.

The best Led Zeppelin songs revolutionised rock music, while Led Zeppelin sold millions of albums and experienced success on a level most bands couldn’t imagine in their wildest dreams. Yet they often shunned the limelight – frequently refusing to release their most popular songs as singles and rarely appearing on TV. The one area of mass media they did embrace, however, was visual art, as they figured (correctly) that a suitably enigmatic almost cover would do wonders for their mystique. Often working closely with cutting-edge designers such as George Hardie and Storm Thorgerson, their records came housed in era-defining sleeves, ensuring that the best Led Zeppelin album covers still attract a whole lotta love today.

Here, then, are the ten best Led Zeppelin album covers, ranked and reviewed. 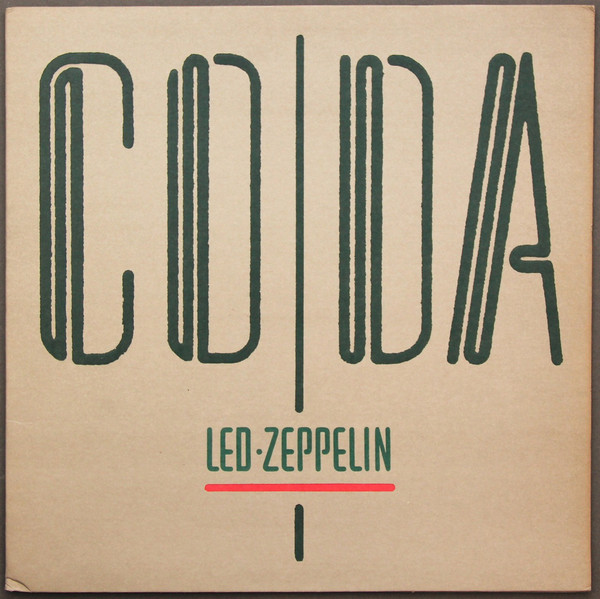 Released in November 1982, two years after Led Zeppelin disbanded following John Bonham’s death, Coda rounded up most of the unreleased tracks from the band’s remarkable 12-year career. From a design point of view, it also marked the end of an era, becoming the last cover the London-based design group Hipgnosis completed before disbanding in 1983. Their fifth and final commission for Led Zeppelin, Coda is also the simplest and most understated among the best Led Zeppelin album covers, with the album’s title made up from an alphabet typeface design known as Neon, designed by Bernard Allum in 1978. 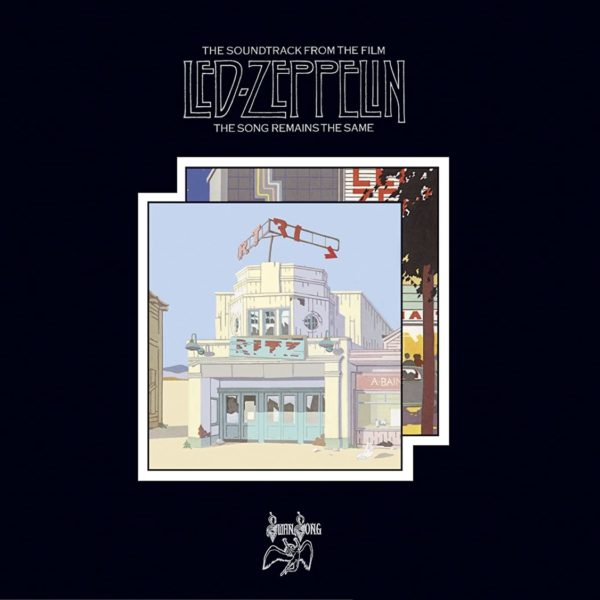 The lone official live album and film released during Led Zeppelin’s lifetime, The Song Remains The Same was sourced from three concerts at New York’s Madison Square Garden, during the band’s 1973 North American tour. The record’s artwork, however, featured an art nouveau-style depiction of the dilapidated movie house located on Old Street film studios in London, which was used by the group for rehearsals prior to the tour. A collaboration between the Hipgnosis team and Led Zeppelin designer George Hardie, The Song Remains The Same’s lavish gatefold sleeve held its own among best Led Zeppelin album covers, originally coming with the added attraction of an eight-page colour booklet.

Many fans still believe the curious black obelisk-shaped object Led Zeppelin used for the cover of Presence (referred to simply as “The Object”) was a spoof on the monolith from Stanley Kubrick’s influential 2001: A Space Odyssey. However, according to Hipgnosis’ Storm Thorgerson – who designed the cover along with George Hardie – “The Object” was intended to represent Zeppelin’s “force and presence”. Thorgerson later elaborated further on the concept by saying that it represented the power of Led Zeppelin, as their music was “so powerful, they didn’t need to be there”.

The background in the cover photograph was an artificial marina, installed in London’s Earls Court arena for the annual Boat Show, in the winter of 1974-1975. The artwork’s inner sleeve photographs, meanwhile, were sourced from a variety of archive stock pictures, and were put together as if designed for a feature in National Geographic magazine. The girl on the back cover photo was Samantha Gates, who had previously appeared with her brother on the band’s Houses Of The Holy artwork. The enigma factor again worked in the design team’s favour with Presence: cementing its place among the best Led Zeppelin album covers, Hipgnosis and Hardie were nominated for a Grammy Award for Best Album Package in 1977. 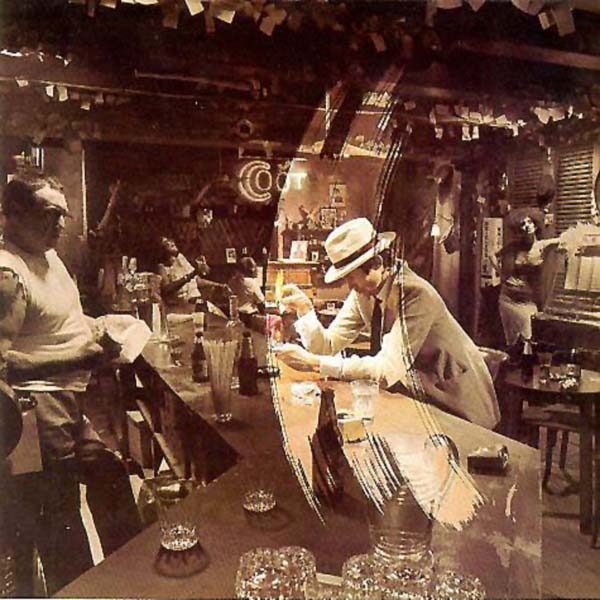 Though designed by Hipgnosis’ Storm Thorgerson, the Grammy Award-winning sleeve for Led Zeppelin’s final studio album, In Through The Out Door, was reputedly inspired by a flippant comment by the band’s manager, Peter Grant, in which he claimed a Led Zeppelin album would sell even if it was packaged in a simple brown paper bag. Taking this as their cue, Thorgerson and his team concealed the record in a brown paper outer sleeve, with the band’s name and album title added in rubber-stamped purple ink.

The album’s artwork itself, however, featured a man sitting in a seedy bar, reading and burning a Dear John letter. Thorgerson and company designed six variants on the same scene, shooting them from different angles; with each sleeve obscured by the brown paper, fans buying early pressings of In Through The Out Door had no idea which variant they’d bought until they returned home and removed wrapping. 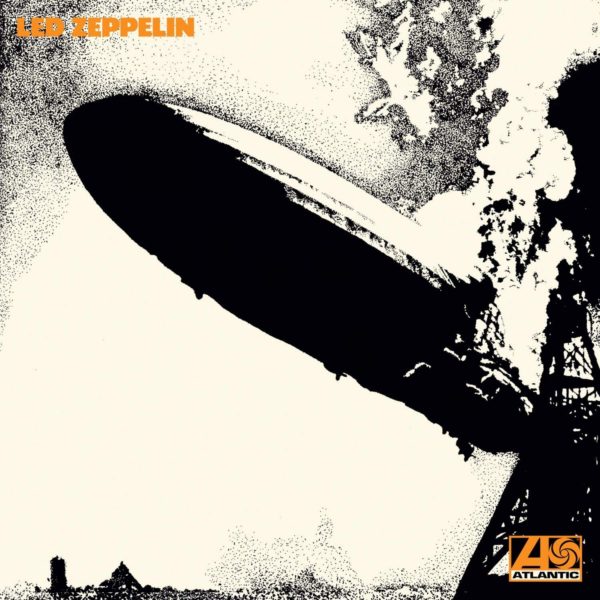 Led Zeppelin’s longtime collaboration with illustrator and graphic designer George Hardie began with the iconic sleeve housing their debut album. Though based upon Sam Shere’s famous photograph of the 1937 Hindenburg airship disaster, the image was treated by Hardie, who rendered the original black-and-white photograph in ink using a Rapidograph technical pen and a mezzotint technique. Atypically, the album’s back cover actually carried a traditional group shot of the band. This was taken by Jimmy Page’s former Yardbirds bandmate Chris Dreja, who pursued a career in photography after The Yardbirds split in 1968.

Though it represents one of the best Led Zeppelin album covers, the artwork also attracted some controversy. During the band’s 1970 Scandinavian tour, aristocrat Eva Von Zeppelin (a relative of the creator of the Zeppelin aircraft) threatened legal action and the band were forced to play in Copenhagen under the pseudonym of The Nobs. 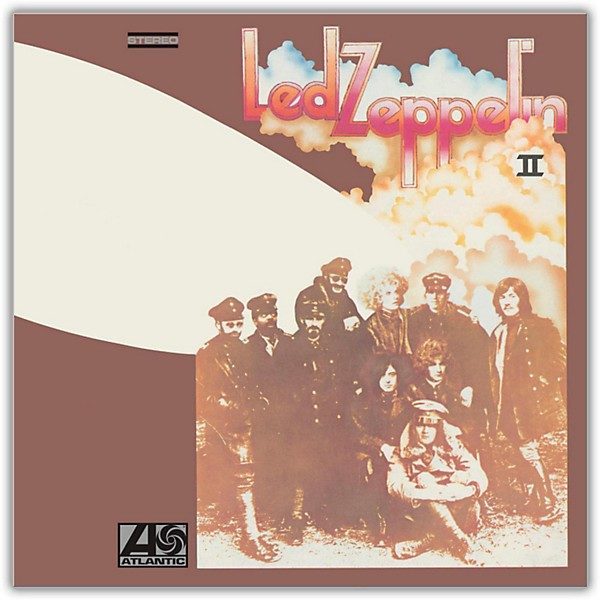 In one sense, Led Zeppelin II stands apart among the best Led Zeppelin album covers, in that it was the only one to feature the band – albeit in a rather doctored fashion. Designed by artist David Juniper, the artwork was based on a famous photograph of the Jagdstaffel 11 Division of the German Air Force during World War I, otherwise known as The Flying Circus. This crack squadron were led by Manfred Von Richthofen, better known as the Red Baron and considered the war’s ace-of-aces, with 80 air combat victories to his name.

For Led Zeppelin II, however, Juniper removed the faces of The Flying Circus and replaced them with those of the four bandmates, along with the faces of Led Zeppelin’s manager, Peter Green, their long-term tour manager, Richard Cole, and blonde-haired French actress Delphine Seyrig in her role as Marie-Madeleine in the film Mister Freedom, a leftist anti-war satire by William Klein. The artwork also pictured the outline of a zeppelin on a brown background (similar to the cover of the band’s self-titled debut album), which gave rise to the record’s nickname, “The Brown Bomber”. 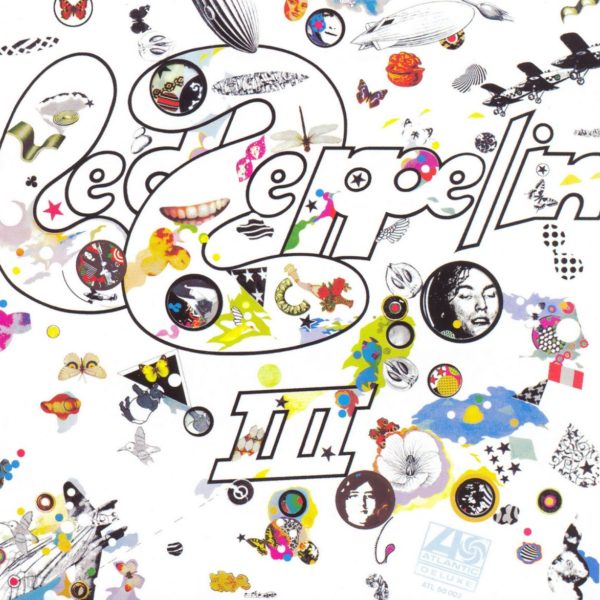 Led Zeppelin III’s original vinyl edition was packaged in a gatefold sleeve with an innovative cover, designed by Zacron (aka Richard Drew): a multimedia artist whom Jimmy Page had met in 1963 while Zacron was a student at Kingston College Of Art. A graduate of London’s Royal Academy Of Arts and later a lecturer at Leeds University, Zacron met Led Zeppelin’s four members individually, early in 1970, and devised a collage for Led Zeppelin III based on a series of photographs he took of the four musicians.

The cover and interior gatefold art consisted of a surreal collection of images on a white background, many of them connected thematically with flight or aviation. Behind the front cover was a rotatable laminated card disc, or volvelle (a wheel chart), covered with more images, including photos of the band members, which showed through holes in the sleeve; moving an image into place behind one hole would usually bring one or two others into place behind others. 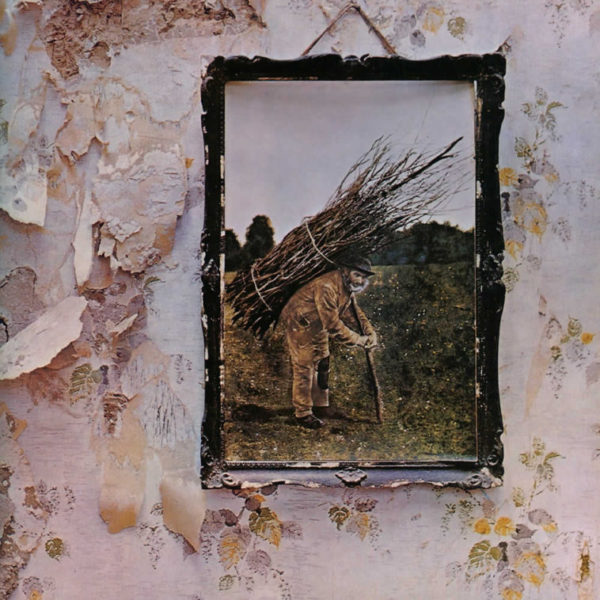 Though it’s now widely accepted as one of the best Led Zeppelin album covers, the enigmatic and much-discussed sleeve art for the group’s untitled fourth album (aka “Led Zeppelin IV”, or “Zoso”) initially set the band on a collision course with their record label, who were opposed to it being printed without a title. Zeppelin, however, stood their ground, even withholding the record’s master tape until they were happy with how the record was presented.

According to Jimmy Page, the painting depicted hanging on the wall was discovered by Robert Plant when, along with Page, he visited an antiques shop in Reading, Berkshire. Describing the image for Record Collector in 2011, Page said, “The old man carrying wood is in harmony with nature. He takes from nature. It’s a natural cycle.” The high-rise flats on the rear cover, meanwhile, stood at East Hill, Dudley, in the West Midlands, until they were demolished in 1999. Also highly praised, Barrington Colby’s memorable inside cover illustration was based on The Hermit tarot card as originally drawn by 19th-century illustrator Pamela Colman Smith. 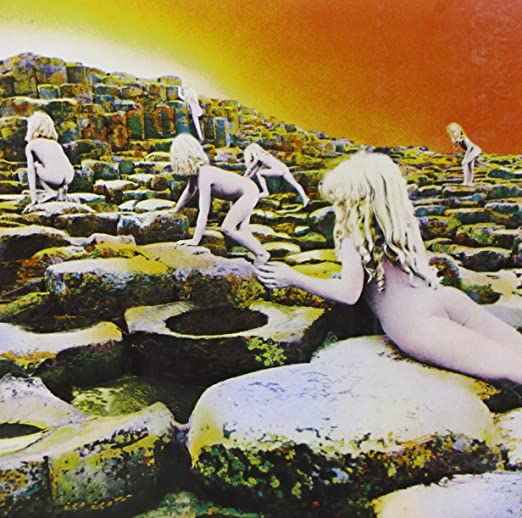 The best Led Zeppelin album covers were almost as distinctive as their music – something which 1973’s Houses Of The Holy vividly bears out. Again executed by Hipgnosis’ design team of Storm Thorgerson and Aubrey Powell, the eerie, dreamlike cover was shot on location at the Giant’s Causeway on the north Antrim Coast in Northern Ireland, and was based upon Arthur C Clarke’s sci-fi novel Childhood’s End, in which children climb off the end of the world.

The record’s outer sleeve photos were originally shot in black-and-white, while the inner-sleeve shots were captured at nearby Dunluce Castle. The two child models, Stefan and Samantha Gates, were photographed naked (as they appear on the sleeve) and – contrary to speculation – they sported their own hair, not wigs. The images were later airbrushed, though while the original instructions were for the children to appear in gold and silver, they were accidentally amended to the more atmospheric purple seen on the eventual Houses Of The Holy artwork. The complicated design process led to the album’s release date being put back two months, but it was worth it to realise a classic cover, which Aubrey Powell later revealed was his “favourite sleeve of all time from the Hipgnosis stable”. 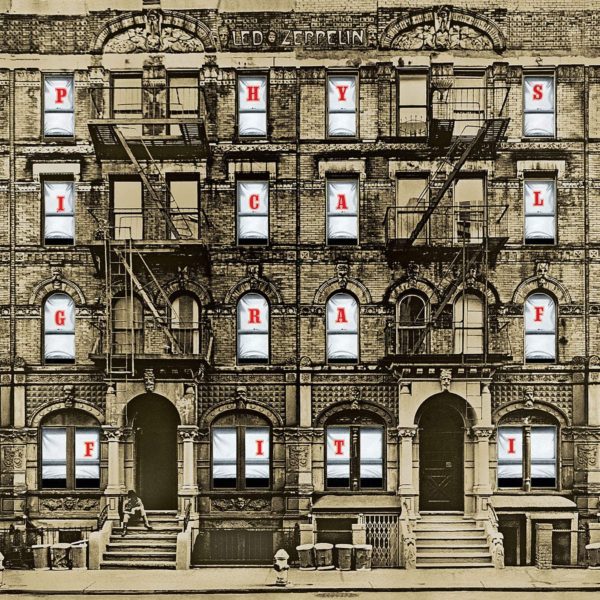 The brainchild of Greenwich Village-based designer Peter Corriston, Physical Graffiti’s spectacular, Grammy nominated die-cut sleeve depicted a New York City tenement block through whose windows various cultural icons such as WC Fields, Buzz Aldrin and Marcel Duchamp could be interchangeably viewed. Topping our list of the best Led Zeppelin album covers, the original artwork included four artworks made up of two inner sleeves (for each disc), a middle insert cover and an outer cover. The middle insert cover was white and detailed the album’s tracklist and recording information. The outer cover had die-cut windows on the building, so when the middle cover was wrapped around the inner sleeve and slid into the outer one, it spelled the album’s title on the front.

“Mainly, we were thinking of putting out an album to knock people’s socks off, and we wanted the packaging to be great, too,” Jimmy Page said of Physical Graffiti in a 2015 Record Collector interview. “Everyone paid so much attention to artwork at that time, and not just Led Zeppelin, of course. Album sleeves were works of art.”

For the most iconic artworks in music, check our best album covers of all time