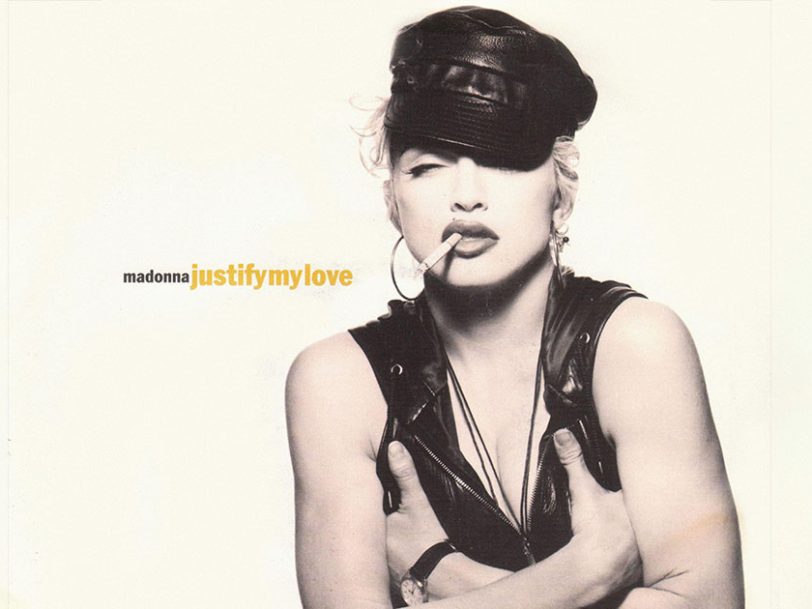 Justify My Love: Is This Madonna’s Most Controversial Song?

Madonna’s most provocative single to date, Justify My Love was a sex-positive anthem that shocked the world.

That Madonna has used sex to create an impact since her 1984 album, Like A Virgin, was news to no one at the close of the 80s, but the coming decade would see her amplify its sensibility in her work. This development really began with Justify My Love, the 1990 lead single from the “Queen Of Pop”’s iconic first hits compilation, The Immaculate Collection, and a song that would top the US charts, creating a media storm when MTV banned its video.

A statement of seduction: taking risks with typical flair

1990 was arguably the peak of Madonna’s imperial phase. The previous year’s Like A Prayer album had proved a critical and commercial triumph and was still yielding hits; that summer’s Blond Ambition World Tour had set the new standard for a stadium show. She’d starred in the blockbuster movie Dick Tracy, issued a charming companion soundtrack album, I’m Breathless, and, to top it all, had bagged the world’s best-selling single of the year in Vogue. The decision to issue her first greatest-hits collection in time for Christmas made commercial sense, but no one had anticipated the provocative statement that was its flagship new song, Justify My Love. With typical risk-taking flair, Madonna was about to incite outrage like never before.

This Lenny Kravitz composition (later with Prince collaborator Ingrid Chavez credited alongside Madonna’s input to the lyrics) was the most dramatic of Madonna’s many musical shifts of direction to date (she had immediately followed dancefloor anthem Vogue with the brassy, cabaret turn of Hanky Panky just that summer; you never knew for sure what would come next). Justify My Love’s breathless delivery wrapped around that throbbing bassline sounded unique on pop radio, but its midtempo intensity wasn’t obviously pitched. Some dynamic remixes, such as those by Madonna’s future Ray Of Light collaborator William Orbit – as featured on the compilation 50 Number Ones: Finally Enough Love – amplified the dance credibility of the track at a time when house music was the dominant genre, but this song had a more direct purpose: to get you in the mood.

Wanting more than just one type of sex: a controversial promo video

If later singles such as Erotica would have plenty to say about sexual politics, Justify My Love was a simple statement of seduction. It’s a track only Madonna could have carried off convincingly, which makes the fact that it had originally been considered for Paula Abdul all the more surprising. The single was released on 6 November 1990 – just two weeks ahead of The Immaculate Collection – but the controversy really started when MTV decided it couldn’t air the accompanying promo video.

The Justify My Love clip had been directed by Jean-Baptiste Mondino, who had already helmed the video for Open Your Heart, and it was filmed in a Paris hotel with Madonna and a group of actors and models, including Amanda Cazalet and Tony Ward, the latter of whom had appeared as a merman in the previous year’s Cherish video and was now dating the “Queen Of Pop”. The gender fluidity and nudity featured in the new video were provocative enough in a more sheltered era, but the fact it was being issued by such a major star was extraordinary. George Michael’s 1987 I Want Your Sex had explored similar thematic territory but was altogether more conventional in its approach – after all, Justify My Love was about wanting more than just one type of sex.

Madonna defended the video on a US talk show but was quick to capitalise on the MTV ban by issuing it as a standalone VHS. Almost inevitably, it ended up becoming the world’s best-selling video single, shifting close to a million copies worldwide.

Ignoring attempts to silence her: Justify My Love tops the charts

Justify My Love climbed to the top of the Billboard Hot 100 in just eight weeks, becoming the first US No.1 of the new year – and Madonna’s 12th chart-topper in a staggering run of US and UK No.1 singles – and it hit No.2 in the UK, helping to drive sales of The Immaculate Collection, which, at the time of writing, sits just outside the Top 10 best-selling UK albums of all time. The song’s live debut came during 1993’s Girlie Show World Tour, when a My Fair Lady-inspired set piece made for one of the memorable tour’s many highlights.

Madonna has always sought to test boundaries, and the critical and commercial success of Justify My Love undoubtedly gave her the confidence to push things further on her next studio album, Erotica. It was a move she famously has “absolutely no regrets” about but, in hindsight, Justify My Love perhaps marked the furthest reaches of what a rattled media would be comfortable with. Fortunately, Madonna would take little notice of their attempts to silence her.