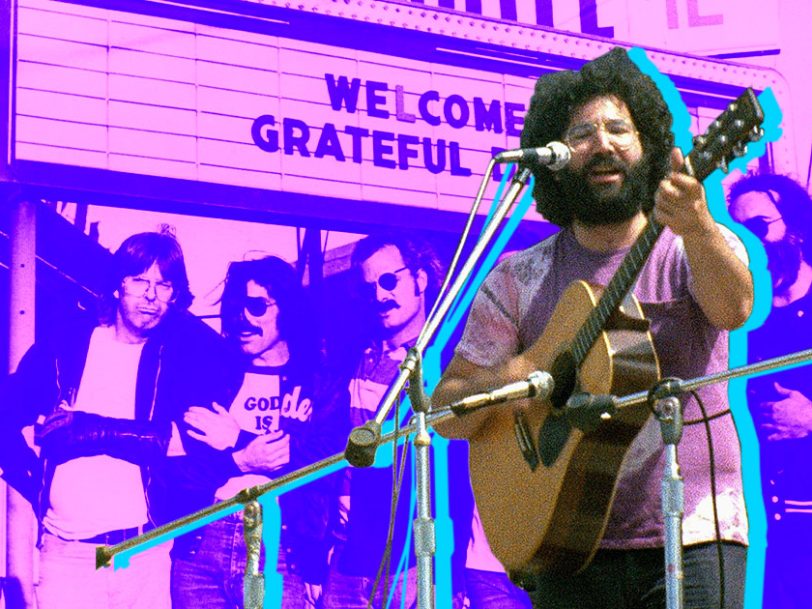 Characterised as a “long strange trip”, Grateful Dead’s legacy is one like no other in the history of music.

From their earliest live performances, in 1965, there was no band like Grateful Dead. Even during that formative period, the Dead’s music was an open-hearted exploration of the possibilities of North American music: they took their folk, country, blues, jazz, bluegrass and gospel influences and poured them into timeless songs and transcendent improvisations.

Listen to the best of Grateful Dead here.

Over the course of their career – a “long strange trip”, as a 2017 documentary had – Grateful Dead developed a style that was all their own, with lead guitarist Jerry Garcia’s fluid guitar lines performing the role of a saxophonist in a jazz group, and Bob Weir playing complementary chord inversions, as if a jazz pianist. Meanwhile, Phil Lesh turned preconceived notions of bass playing upside-down, his supple lines at times acting as a second lead guitar. Together, they sounded like nobody else.

Grateful Dead’s leader, Jerry Garcia, was typically modest when discussing the band with author Charles Reich and Rolling Stone editor Jann Wenner in 1972. “We don’t think of ourselves as a rock’n’roll band, an experimental band, this band or that band,” he said. “If anything, we think of ourselves as musicians, who have lots of possibilities.”

Unusually, the Dead’s studio albums were, for the most part, the starting point for their material, rather than an opportunity to record definitive versions of their songs. Their music came to life on stage, where a collective intuition took hold among the group and sparks flew. No two Dead concerts were the same and, as a result, recordings of those gigs stand up as a body of work in itself, an alternative history of one of the most important bands of their time.

The Dead’s approach to the circulation of those recordings speaks volumes. Interviewed by Steven Marcus in 1989, Garcia was philosophical about the way fans traded recordings of their gigs: “Hey, when I’m done with it, it’s theirs. If somebody can find a use for music after it’s been performed, fine with me… Being able to trade them around, I think that’s healthy stuff… as long as the people who are doing the taping aren’t obnoxious about it.” Garcia’s generous attitude not only fostered a huge amount of goodwill among a loyal fanbase known as “Deadheads”, but it echoed the countercultural philosophy that underpinned the Dead’s music from the beginning.

Grateful Dead’s relationship with their fanbase was like no other. In the early 70s, as the promise of the hippie movement of the 60s faded from view, the Dead and their ideals remained important to both band and fans alike. When they became a hard-touring act in the 70s, the Deadheads followed them; Grateful Dead shows became places of shared values and peaceful camaraderie, and a travelling community grew around the band’s touring schedules. As many of their contemporaries were treading water artistically, the Dead were constantly evolving, and their live shows became an ever-shifting act of mystic communion between the musicians and their audience. When mainstream culture became more individualistic and materialistic during the 80s, the Dead’s fanbase became more resilient and attracted new converts – the circus that surrounded the band on tour became as much of a spectacle as the gig itself.

The Dead were also pioneers when it came to technology. When they began to play bigger shows, they found – like others before them – that the PA systems of the 60s and early 70s couldn’t cope with the demands of a large-scale rock concert. The Dead did something about it, giving their soundman Stanley Owsley the resources to put together a custom-made sound system. By 1974, their rig reached epic proportions with a rig dubbed the “Wall Of Sound”. The enormous PA used 92 tube amplifiers to push 26,400 watts through 604 speakers capable of projecting the Dead’s jams up to a half-mile from the stage without distortion. It was hugely expensive, incredibly impractical and took their roadies hours to assemble, but the Dead had pushed barriers and significantly improved the in-concert experience.

Anthems of the sun: early years and Acid Tests

But before all that, there was the music. Initially known as The Warlocks, Grateful Dead played their first gigs in San Francisco, California, in 1965, with a line-up of Jerry Garcia (lead guitar, vocals), Bob Weir (rhythm guitar, vocals), Ron “Pigpen” McKernan (keyboards, harmonica, vocals), Phil Lesh (bass, vocals), and Bill Kreutzmann (drums). Weir described their work ethic in the early days in an interview with Uncut magazine in 2020: “We would practice every day for long hours. That’s what it takes to come together as a band and to be able to play the other guys in the band and to have them be able to play you. We listened to a lot of jazz musicians and their approach seemed like a lot of fun to us – we were going to find more adventure that way.”

The Dead became the house band at Ken Kesey’s Acid Tests, parties at which guests tripped on LSD provided by the Dead’s future soundman Owsley. The gigs would prove formative for the band, not least because of the heightened state they’d find themselves in while playing, which encouraged sonic exploration.

Interviewed on Late Night With David Letterman in 1982, Jerry Garcia explained the impact of the gigs: “At the time it seemed like things were going to change real fast. There was this amazing momentum. When the Acid Tests were happening, they started with 50 or 60 people, and within a matter of weeks, it had escalated to 3,000 or something. It had this amazing juggernaut quality of picking up lots of people as it went along…There was a sense of history going on.”

The Dead became synonymous with the burgeoning hippie movement in San Francisco in the mid-60s and built up enough of a following to sign to Warner Bros. The material was strong on their first three albums – Grateful Dead (1967), Anthem Of The Sun (1968) and Aoxomoxoa (1969) – but the group struggled to capture the freedom and energy of their live shows, and marathon experimental recording sessions had left them out of pocket. The inspired solution was to record a live album on home turf, 1969’s Live/Dead, a vital document of the thrilling and ecstatic experience of a Grateful Dead show which featured their signature tune, Dark Star, stretched out to a kaleidoscopic 23-minute jam.

The following year, Grateful Dead showed a whole new side to their music with the classic albums Workingman’s Dead and American Beauty. For these records the emphasis switched firmly to songwriting in the traditional sense, and lyricist Robert Hunter came into his own, penning some of the best Grateful Dead songs, among them Ripple and Friend Of The Devil. Here was a rootsy, countrified Dead, with tightly structured and arranged songs that spoke of the lives and struggles of everyday people. Unsurprisingly, given their innate rebelliousness, the band’s next two albums – 1971’s Grateful Dead (aka “Skull And Roses”) and Europe ’72 – saw them change tack again with a couple of sprawling live records that emphasised the range of their repertoire and the musicians’ telepathic playing.

Tragedy hit the band in 1973 with the death of Pigpen, whose health had deteriorated after years of heavy drinking. Aged just 27 when he died, and entering the notorious “27 Club”, the singer, keyboardist and harmonica player had given Grateful Dead’s music a gritty, bluesy edge, and his charismatic on-stage presence was sorely missed. Keith Godchaux subsequently joined the band on keyboards, along with his then wife, Donna, on vocals.

In October of that year, the Dead released Wake Of The Flood, their first album on their own Grateful Dead Records imprint, with Godchaux’s jazzier influence making itself felt. A pair of strong albums followed, From The Mars Hotel (1974) and Blues For Allah (1975), that continued to take the Dead down a more mature, jazz-rock route. Meanwhile, the logistical and financial stresses of touring forced the band to take some time off; recordings of their “farewell” shows at San Francisco’s Winterland Ballroom in October 1974 were released as the double live album, Steal Your Face, in 1976.

A two-year hiatus from touring followed, after which the Dead returned with 1977’s ambitious Terrapin Station. That year also saw a run of some of their most well-regarded live shows, the pick of which was given an official release 40 years later, as Cornell 5/8/77. The album Shakedown Street, produced by Little Feat’s Lowell George, came the following year, after which Keith and Donna Godcheaux left the band, with Brent Mydland taking sitting in on keyboards for 1980’s Go To Heaven.

The 80s saw the Dead concentrate on touring, attracting new generations of Deadheads as their legend grew. Then something unexpected happened – Touch Of Grey, the single from their 1987 studio album, In The Dark, became a surprise hit, reaching the US Top 10 and attracting a mainstream audience. The Dead released their final studio album, Built To Last, two years later. Thanks to Garcia’s failing health, touring was intermittent from then on, and the singer was hospitalised in 1992 with diabetes and an enlarged heart. The Dead returned to the road after Garcia’s recovery, but the guitarist and father figure for the counterculture died on 9 August 1995, and Grateful Dead dissolved officially four months later.

The years since have seen Grateful Dead’s legacy grow, with a steady stream of archive releases painting a fuller picture of their remarkable creative achievements. The group were not only America’s definitive rock band, but their ethos had a lasting impact, influencing tech innovators, artists and activists alike. Generations of musicians have been influenced by Grateful Dead, as evidenced by beloved indie outfit The National’s shepherding of the 59-track tribute album Day Of The Dead (2016), which featured covers of Dead songs by The War On Drugs, Wilco, The Flaming Lips and many more.

Dead founding member Bob Weir himself appeared on that album, and he continues to keep the flame burning, playing shows with his group Wolf Bros. Phil Lesh is also keeping the Dead’s music alive with his Phil Lesh & Friends shows. That long strange trip isn’t over yet…