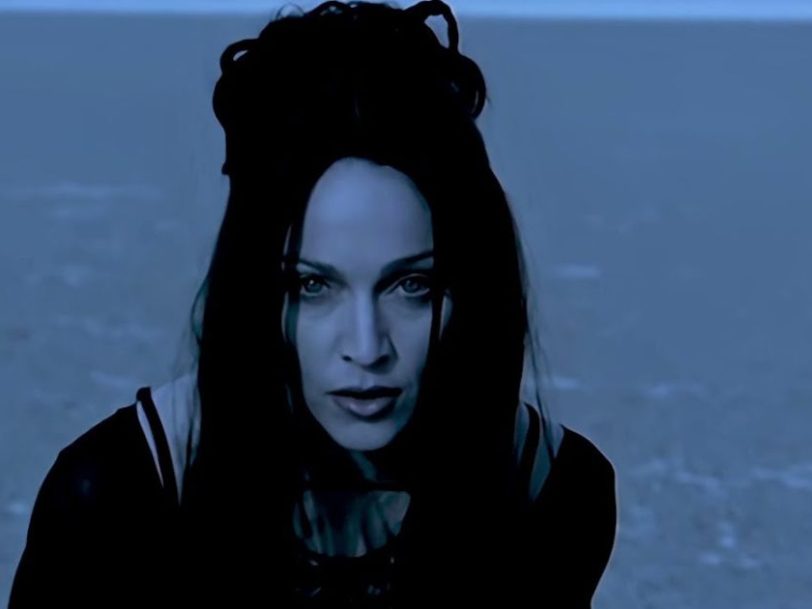 The sonic renaissance of Madonna’s career at the close of the 20th century was nothing less than revolutionary. For the “Queen Of Pop”, the 90s had been a decade in which every new reinvention seemingly attracted controversy (not least the full-on shock generated by the Erotica album), even as the hits kept coming. But by 1998, as she prepared to release the Ray Of Light album, Madonna was ready to make a new artistic statement. Released as the album’s lead single, her game-changing new song Frozen drew on the melodic pop balladry of the past and fused it with the ethereal charisma of William Orbit’s cutting-edge production.

Launching a new project with a ballad had worked for Madonna before, most notably for 1986’s True Blue album and the Billboard No.1 Live To Tell. But this was different. Frozen restaged her in a cinematic, widescreen frame and, while the track certainly stood up on pop radio, it was the promo clip and a handful of promotional appearances that really put the song on the map.

The promo video: A “mystical creature of the desert and the embodiment of female angst”

Inspired by the film The English Patient, Frozen’s promo video, filmed by acclaimed British artist Chris Cunningham, was shot at Cuddeback Lake, in California’s Mojave Desert, and cast Madonna as a “mystical creature of the desert and the embodiment of female angst”. The Jean-Paul Gaultier costume did little to protect the star from a long, gruelling shoot with temperatures routinely dropping below zero, but the effort proved worthwhile, with the clip earning an MTV Video Music Award for its groundbreaking effects.

Frozen itself has an impeccable pedigree, marking Madonna’s return to writing with long-time collaborator Patrick Leonard, who had crafted such classic songs as 1989’s Like A Prayer and produced her multi-platinum-selling True Blue album. Frozen was among the tracks Madonna’s management had sent producer William Orbit when he was being courted to work with Madonna on what many then considered to be the make-or-break record of her career; his eventual commitment to the project ensured it would become one of the best Madonna albums of all.

Critics seized positively on Madonna’s new sound from the start, with Frozen being added to stations immediately, and the single, released on 23 January 1998, debuting inside the Billboard Top 10. It eventually peaked at No.2 stateside but made it all the way to No.1 in the UK – Madonna’s first chart-topper there since 1990’s Vogue, and continuing her record-breaking run of No.1 singles – where it was supported by a then rare TV appearance on the Saturday-night National Lottery show on its week of release.

The legacy: Bridging to an ever-more charismatic future

Frozen has since built an enviable legacy, and was remixed in 2021 with Sickick for digital release, marking a new era that has seen Madonna return to her back catalogue and reinvent some of her best-known songs. The following year, Fireboy DML also remixed the song, and further Sickick interpretations peaked with Madonna recording some new vocals for Frozen On Fire. These radical revisions are testament to a track that has matured well and which remains one of the best Madonna songs.

Frozen has also appeared on four of Madonna’s tours – inevitably, her return to the live circuit on 2001’s Drowned World Tour was the first occasion, but the song was also part of the setlist for the Re-Invention World Tour, staged in support of her American Life album. It was also included in the second leg of the Hard Candy era’s Sticky & Sweet tour, in 2009, and was the standout moment of 2019 and 2020’s Madame X shows, which saw Madonna’s daughter Lourdes appear in a filmed sequence as her mother performed the track.

Madonna has a sound reputation as a traditional balladeer, and Frozen notably upscaled the ambition and the creative range of what she would attempt in the genre. Its hypnotic video also did much to position the “Queen Of Pop” further from the sexual controversy of the previous decade; this time around, her art was provocative without the shock tactics. It bridged the immediacy of what had come before with the ever-more charismatic chapter of what lay ahead.