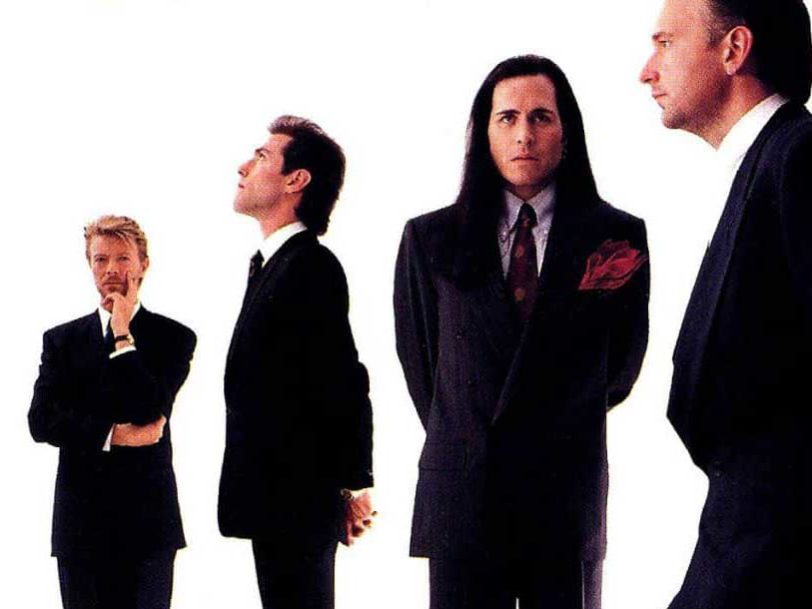 Hindsight is a great leveller, but even 30-plus years’ worth of it fails to explain why David Bowie was criticised for the two albums he made with the short-lived Tin Machine. The artist himself pitched the bruising rock quartet as a way of getting back to basics after the heavily produced mid-80s albums Tonight and Never Let Me Down, but neither fans nor critics were convinced. Incredibly, even Bowie’s label, EMI, hated Tin Machine’s debut album so much they tried to shop his contract to other labels after its initial release in May 1989.

“The Top 40 scene was an unusual experience”

In retrospect, though, it’s possible to put Tin Machine in context if we accept the project as the first step in Bowie’s latter-day artistic renaissance, which gathered pace with 90s albums such as 1. Outside and ‘hours…’, and eventually flourished so fruitfully on his 21st-century classics The Next Day and Blackstar. After all, if we rewind to the pre-Tin Machine days of 1987, we discover that Never Let Me Down and the mega-grossing Glass Spider tour showered Bowie in fame and fortune, but also found him looking to reconnect with “what used to excite me about being in a band”.

“Being shoved into the Top 40 scene was an unusual experience,” he told the Orlando Sentinel in a contemporaneous interview. “It was great I’d become accessible to a huge audience… but not terribly fulfilling.”

Accordingly, Bowie – a figure so widely fêted for his ability to embrace change – duly reinvented himself once again. In doing so, however, he did the last thing most of his long-term admirers might have expected: form an aggressive four-piece rock group with an atypically democratic approach. They called themselves Tin Machine and, as Bowie biographer Christopher Sanford later wrote, they were put together as “a way for Bowie to purge his past, while making his usual deft assault on the market”.

“We wanted to come out of the box with energy”

Certainly, the initial part of that statement rang true. In Tin Machine, Bowie was joined by rhythmic brothers-in-arms Tony and Hunt Sales (previously best known for providing the thunderous bass and drums on Iggy Pop’s Bowie-produced Lust For Life album) and expressive lead guitarist Reeves Gabrels – these days a key member of The Cure. From the word go, Bowie stressed that every band member was equal, and the no-holds-barred, proto-alternative-rock sound they crafted through jamming the old-fashioned way certainly proved cathartic for all concerned.

Working quickly in a series of sessions which took the band and producer Tim Palmer from LA to Switzerland and Nassau in The Bahamas, Tin Machine’s debut album was nailed in little more than six weeks – a feverish bout of creativity that resulted in 35 tracks which were eventually whittled down to 14. Most of the songs were captured live with minimal overdubs, and Bowie even refused to rewrite most of his initial lyrics out of respect for his new band’s spontaneous approach.

“We wanted to come out of the box with energy – the energy we felt when we were writing and playing,” Bowie enthused in a Music Express interview prior to the album’s release. “I’m so up on this that I want to start recording the next album tomorrow!”

In other contemporaneous interviews, the band members cited Cream, Jimi Hendrix and Mountain as influences, and Tin Machine’s debut album showed just how enamoured they were with heavy, primal rock. Heaven’s In Here and the Wild Thing-esque Crack City were built upon hypnotic riffs and heavy grooves underpinned by the door-slamming ferocity of Hunt Sales’ drumming, while the equally savage Sacrifice Yourself and the album’s relentless title track were redolent of then-emerging alt-rock heroes Pixies.

Elsewhere, broiling workouts such as I Can’t Read and the dystopian Under The God found Bowie railing against everything from drugs to urban decay and the sleazier politics of the day with an intensity rarely apparent in his work since Scary Monsters (And Super Creeps). Under The God also featured some of Bowie’s most visceral lyrics (“Right-wing dicks in their boiler suits/Picking out who to annihilate”), while the song provoked Gabrels into producing one of his most wigged-out solos.

Tin Machine wasn’t subtle, but it was explosive, raw and angry – not to mention extremely promising. It first hit the racks on 22 May 1989 – the year that soon-to-be grunge stars such as Soundgarden and Nirvana first began to make headway in Europe – and its proto-grunge blueprint now sounds highly prophetic. It’s also worth recalling that the album did have its champions, with no less a publication than Rolling Stone welcoming its “all-too-welcome feast of aggro-guitar flamboyance and bass-drum body-checking” and noting that “at times it sounds like Sonic Youth meets Station To Station”.

“I look back on Tin Machine with great fondness”

Commercially, Tin Machine’s debut album also performed respectably, eventually moving over a million copies globally – hardly a disaster, even if most of the critics had fixed the band squarely in their sights by the time Tin Machine set out to tour the record.

Unfortunately, much of the negativity subsequently associated with the project stuck, and while Bowie and company reconvened for the arguably superior Tin Machine II in 1991, it proved to be their swansong. At the very least, though, a generous smattering of love and affection really should be doled out posthumously to both albums. More than decent, future-envisioning rock records, they proved that Bowie’s desire to reinvent himself and regenerate as an artist was as keen as ever.

“I actually look back on the Tin Machine years with great fondness,” Bowie told Uncut in a 2005 interview. “They charged me up. I can’t tell you how much. Reeves [especially] shook me out of my doldrums, pointed me at some kind of light and said, ‘Be adventurous again.’ I’ve been finding my voice, and a certain authority, ever since.”

Find out where Tin Machine’s debut album ranks in our run-down of all 28 David Bowie album covers.