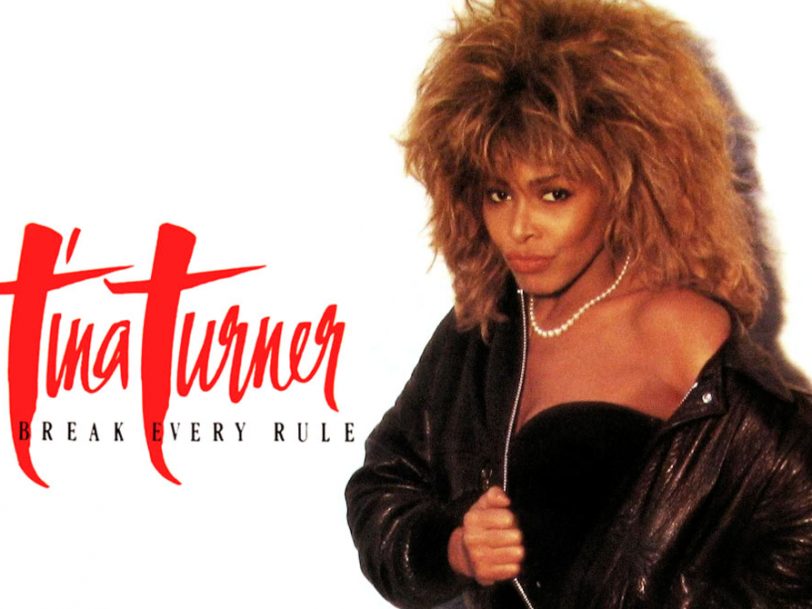 When she began work on her sixth solo album, Break Every Rule, in 1985, the then 46-year-old Tina Turner was still flush with the intoxicating success that her mega-successful comeback album, Private Dancer, had brought her. Released the previous year, that record had made the raspy-voiced singer born Annie Mae Bullock a household name for good a decade after her split from her abusive ex-husband, Ike Turner, in 1976.

Listen to ‘Break Every Rule’.

Propelling Turner into the stratosphere with a much-needed second wind, Private Dancer went multi-platinum around the world, brought her three Grammys Awards and gave the singer her first ever No.1 pop single in the US, in the shape of What’s Love Got To Do With It. Its success, and Turner’s resulting high profile, also helped her grab her second acting role, as Aunt Entity, opposite Mel Gibson in the 1985 blockbuster sci-fi movie Mad Max Beyond Thunderdome. The film’s soundtrack also featured Turner singing We Don’t Need Another Hero, another huge worldwide hit which stoked anticipation for her next album proper, Break Every Rule.

Tina Turner’s stock was at an all-time high, but the real test of her career longevity rested on how Break Every Rule fared in the marketplace. The singer decided to stick with the team that gave Private Dancer its finest moment: British songwriters and producers Terry Britten and Graham Lyle, who wrote and helmed the chart-topping What’s Love Got To Do With It. The duo penned five fresh songs for Break Every Rule, while producer and songwriter Rupert Hine, who had also worked on Private Dancer, also returned for two songs, I’ll Be Thunder and the album’s title track.

In addition, several British rock stars signed up to the project: Eric Clapton, Steve Winwood, Mark Knopfler and Phil Collins. A further endorsement of Turner’s talent was given by David Bowie, who donated the song Girls to the album (Turner had covered Bowie’s Diamond Dogs cut 1984 on Private Dancer, and also duetted with Bowie on his most recent album, Tonight). The Canadian rocker Bryan Adams also co-wrote a track, making Break Every Rule a glittering, star-studded affair.

Phil Collins could be heard pummelling the drums on the album’s opening cut, Typical Male, in which Turner posed as a thrill-seeking femme fatale. A techno-rocker with an earworm chorus, the tune was released as the first single from Break Every Rule and remains one of the best Tina Turner songs. Spending three weeks at No.2 in the US in October 1986, its progress was halted only by Janet Jackson’s immovable When I Think Of You.

In sharp contrast, the album’s second track, What You See Is What You Get, with Eric Clapton on guitar, was a chugging rocker while, on the mellower Two People, Turner dropped her rock persona to show her sensitive side on a midtempo love song about perseverance. Two People was the second single from Break Every Rule and it made No.18 in the US R&B chart; in Spain, arguably the heartland of Turner’s ever-loyal European following, it shot to No.1.

Till The Right Man Comes Along was a typically 80s pop-soul anthem whose peppy brio contrasted abruptly with the moody, atmospheric, synth-driven Afterglow, for which Turner delivered a more restrained, nuanced vocal.

Girls, co-written by David Bowie with the Turkish multi-instrumentalist Erdal Kızılçay, was powered by Phil Collins’ propulsive drums. With its oblique lyrics and art-rock, it made for one of Break Every Rule’s most leftfield numbers (The Thin White Duke would put the song on wax himself in 1987, when he recorded it as a B-side to Time Will Crawl).

Back Where You Started, a tune co-written by Bryan Adams and co-produced by the songwriter with the noted US rock producer Bob Clearmountain, found Turner in familiar hard rock terrain, while Break Every Rule’s title track was a romantic ode set to a throbbing backbeat about a woman who will do whatever it takes – including lying and cheating – to be with the person she loves. It saw chart action as the third single issued from the album, making No.74 in the US and No.43 in the UK.

Dire Straits’ mainman, singer/guitarist Mark Knopfler, wrote and produced the rocking Overnight Sensation, a catchy, propulsive number whose title sums up Tina Turner’s miraculous mid-80s comeback. Knopfler serves up meaty guitar lines on the track, and was also present on Paul Brady’s storytelling beat ballad, Paradise Is Here, a song about seizing the moment and not waiting in vain for pipe dreams to materialise. The track featured a mesmerising soprano saxophone solo from US jazz star Branford Marsalis. Closing Break Every Rule, I’ll Be Thunder a slow but sure-footed ballad on which Tina Turner proved her voice was a force of nature in terms of its raw, tempestuous power.

Unlike the phenomenon that was Private Dancer, Break Every Rule didn’t break any records but, released on 23 September 1986, it hit No.4 on the Billboard 200, reached No.7 in the US R&B albums chart and topped the album charts in Germany, Spain and Switzerland, the country that Turner would later adopt as her home. The album quickly went platinum and, at the 1987 Grammy Awards, Back Where You Started grabbed the gong for Best Female Rock Vocal Performance.

If any doubts lingered over the sustainability of Turner’s comeback, they immediately evaporated when Break Every Rule hit the shops. Continuing the upward trajectory that Private Dancer had established, the album confirmed Tina Turner as a trend-setting global superstar for whom rules and restrictions meant nothing.