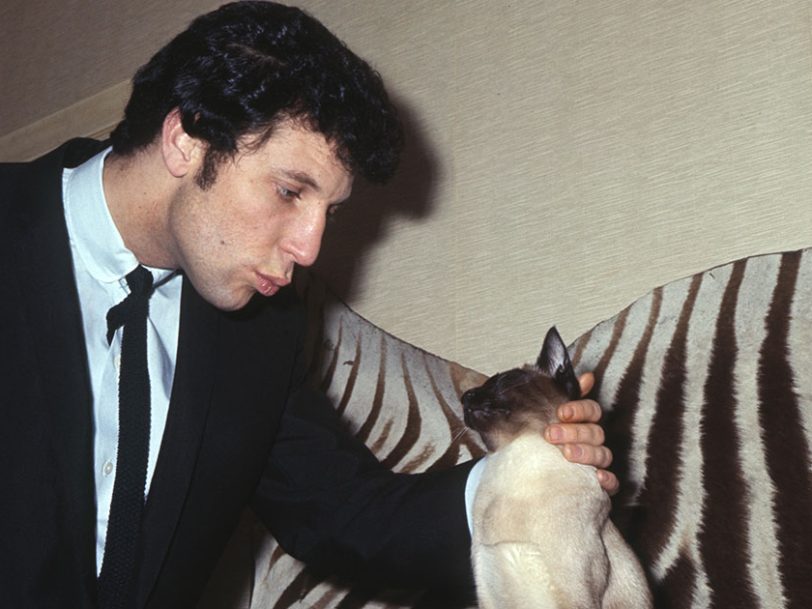 Running the gamut from classic rock and sophisticated pop to rockabilly and jazz, the best songs about cats will keep you feline groovy.

For many of us, cats are extremely precious pets, but our favourite feline friends have also been the subject of fantastic songs from a variety of musicians. Everything from their inherent slinkiness through to their mysterious purr and the myth that they have nine lives has inspired not only songs about cats themselves, but also given songwriters plenty of feline-related imagery for lyrics which celebrate the singular allure of a loved one. Sure to be catnip to animal-lovers around the world, here are the 15 best songs about cats.

The first of seven consecutive chart-topping albums in the US, Elton John’s fifth record, Honky Château, was named after the place of its conception, France’s Château D’Hérouville – the same studio that later birthed David Bowie’s Low and Iggy Pop’s The Idiot. Though big on ballads and country-rock workouts, Honky Château opened with the atypically funky, brass-enhanced Honky Cat: a slice of hot New Orleans-style R&B reminiscent of Dr John or Allen Toussaint, with a classic outsider lyric about a country boy from the Southern states (the titular “honky cat”) trying to make it in the big, bad city.

A song comparing a partner’s desirability with a cat’s infinite allure, the Burt Bacharach- and Hal David-penned What’s New Pussycat? was written for the offbeat comedy film of the same name, scripted by a then up-and-coming Woody Allen for a cast featuring Peter Sellers, Peter O’Toole and former Bond girl Ursula Andress. Belted out with customary gusto by the ever-versatile Tom Jones, the song arguably had a more widescreen appeal than the movie, and it reached No.11 when given a single release in the UK. Though undoubtedly one of the best songs about cats, What’s New Pussycat? narrowly missed out on an Oscar for Best Original Song, with The Shadow Of Your Smile, from the Richard Burton and Elizabeth Taylor vehicle The Sandpiper, taking home the honours at the 1966 Academy Awards ceremony.

13. The Kinks: Phenomenal Cat (From ‘The Kinks Are The Village Green Preservation Society’, 1968)

One of the many highlights from The Kinks’ nostalgia-riven masterpiece, The Kinks Are The Village Green Preservation Society, Phenomenal Cat is a glorious slice of whimsical, soft-focus psychedelia about a cat “in the land of idiot boys”. He’s a traveller whose adventures have led him to “Cowes, Sardinia, Kathmandu, the Scilly Isles and the Sahara”, but it now seems his roving days are over (“No one bothered him, as he sat content in his tree”). Gentle and playful, this song’s feline hero seems the very embodiment of the cat who got the cream.

One of countless great songs credited to the US songwriting and production duo Jerry Leiber and Mike Stoller, Three Cool Cats initially snuck out on the flipside of Charlie Brown, a 1959 hit by doo-wop stars The Coasters.

The song’s fun but smartly-observed lyric painted a portrait of the era’s fast-emerging teenage culture from both sides of the gender divide, with the boys (“the three cool cats”) keeping a keen eye on the girls (“three cool chicks”), and – as with most Lieber & Stoller songs – it proved to have a broad appeal. Three Cool Cats was covered by Japanese garage rockers The 5.6.7.8’s and, on New Year’s Day 1962, it was one of 15 songs The Beatles performed as part of their ill-fated Decca Records audition in London.

A wonderfully sleazy rock song utilising feline imagery to describe steamy sex, Stray Cat Blues was reputedly influenced by The Velvet Underground’s Heroin, and it has a similarly hypnotic feel, with its epic, drone-like quality further accentuated by Nicky Hopkins’ repetitive piano part and Brian Jones’ Mellotron. Though a fine example of the Stones at their imperious best, Stray Cat Blues was never a single, but it has enjoyed cult status on its own terms. Cementing its status among the best songs about cats is a litter of covers by acts as disparate as blues-rock maestro Johnny Winter, grunge icons Soundgarden and electro-industrial outfit Nitzer Ebb.

Cat’s In The Cradle rewarded the prolific New York City-born singer-songwriter and activist Harry Chapin with his only Billboard No.1, with his impassioned vocal performance also bagging him a Grammy nomination. A stirring folk-rock anthem assisted by swirling strings, Cat’s In The Cradle is really a reflective rites-of-passage song about how our relationships with our parents change, but it remains relevant today. Sadly, Chapin died in a car crash in 1981, but his signature hit has lived on, with covers by Johnny Cash and a US chart-topping version by Ugly Kid Joe helping it retain its across-the-board appeal.

Elvis Costello prepared for his first post-Attractions album, Spike, by co-writing a clutch of songs for Paul McCartney’s acclaimed Flowers In The Dirt. In fact, the pair had such a glut of great songs that two more of their co-writes – Pads, Paws And Claws and Veronica – ended up on Costello’s record. The highly melodic Veronica went Top 40 in the UK, though the spiky Pads, Paws And Claws was arguably the more interesting song: opening with a heartfelt “Miaow”, this playful blues- and rockabilly-flavoured strut is steeped in cat-related imagery.

Dance-pop crossover act Deee-Lite are mostly hailed for their global smash, Groove Is In The Heart, and its parent album, 1990’s World Clique. However, there’s plenty more to explore in the band’s discography, not least their second album, the underrated Infinity Within. That record saw Lady Miss Kier and company displaying a sharper political edge, though there was still plenty of dancefloor-friendly action to be had with Pussycat Meow – a slice of B-52s-esque fun which comfortably nestles among the best songs about cats.

One of the best songs about cats, for the way it compares a loved-one’s indefinable allure with the animal’s equally mesmeric qualities, The Stranglers’ excellent Top 10 hit, European Female, was full of sophisticated imagery (“Her green eyes they held mystery/No emotion on her face”). The song’s main writer, bassist Jean-Jacques Burnel, delivered his vocal with a semi-whispered grace that perfectly set the scene for the sophisticated pop found on the parent album, Feline.

Scarlet Pussy appeared as the flip of I Wish U Heaven, the third and final single from Prince’s tenth album, Lovesexy, though it was credited to his gender-fluid alter ego, Camille. Five years later, the song made its way onto the third disc of Prince’s The Hits/The B-Sides collection. Lithe, dynamic, George Clinton-esque funk, Scarlet Pussy was stuffed with innuendo-laden feline imagery (“This kitty cat of fine descent, was cherished by her mother/Who wouldn’t let another, pet her, unless he was qualified”) and an audacious chorus which cave Romeo And Juliet an unlikely spin (“Pussycat, pussycat/Wherefore art thou, puppy?”).

So far as the best songs about cats go, The Cure are spoiling us, for they’ve released not just one, but two contenders. Robert Smith’s troops initially recorded the brooding, hypnotic All Cats Are Grey for their morose third album, Faith, but then lightened up and took a surprise left-field turn to pure pop for their first Top 10 hit, The Love Cats.

An infectious piece of jazz-infused pop-noir, the song was a great success, but capturing its promo video was much harder. Falling foul of the unwritten law which tells people not to work with children or animals, The Cure hired a studio full of cats for the shoot, only to end up using stuffed ones after (surprise, surprise) the real ones kept on acting up.

Driven by Syd Barrett’s suitably slinky, Duane Eddy-esque guitar riff, Lucifer Sam is arguably the most direct, rock-based track on Pink Floyd’s psych-infused debut album, The Piper At The Gates Of Dawn. Undoubtedly one of the best songs about cats, its lyrics are replete with feline imagery which relates directly to Barrett’s own pet Siamese cat (“That cat’s something you can’t explain”). Yet, as ever with Barrett, things are not quite what they seem: he also alludes to his then girlfriend Jenny Spires’ darker side (“Jennifer Gentle, you’re a witch”) during this brilliant, otherworldly vignette which still ranks among the best Pink Floyd songs.

Commercially, the original 1982 recording proved highly successful, charting in both the UK and the US, and it received widespread acclaim, but Bowie wasn’t convinced and – with help from producer Nile Rodgers – he overhauled the arrangement and re-recorded the song for 1983’s multi-platinum-selling album Let’s Dance. The better known of the two versions, the latter take is arguably the more dynamic, though the slower, icier Moroder one has all the enigmatic qualities of a transient alley cat.

Topping our list of the best songs about cats is Squeeze’s signature tune – even if the cats in question are hip humans, rather than felines per se. Singer Chris Difford’s brilliant, innuendo-laden lyrics (“I’m invited in for a coffee/And I give the dog a bone”) effectively centred around the lifestyle he and his bandmates enjoyed as young men about town, with additional references to popular 70s TV shows such as The Sweeney and The Benny Hill Show.

Encompassing elements of disco and new wave, the music also had a sinewy, feline-esque feel, and the South London quintet immediately sensed that Cool For Cats – which reached No.2 in the UK and sold half a million copies – had something unique about it. “As soon as Chris played us [his early demo], we knew it was going to be a great song,” co-frontman Glenn Tilbrook said in Jim Drury’s Squeeze: Song By Song. “Chris’ delivery was so good. He sounded unbelievably cool.”