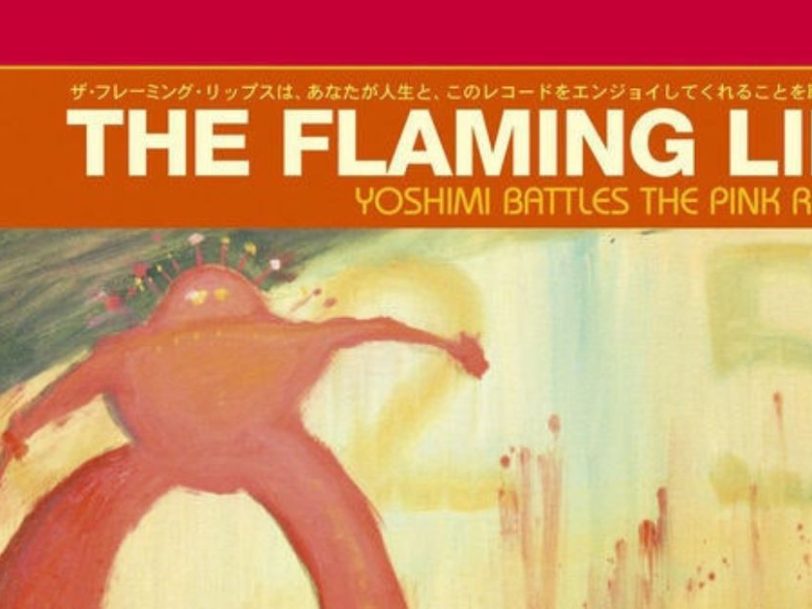 As the 90s came to a close, The Flaming Lips staged an unlikely career turnaround, shifting from anarchic noiseniks to purveyors of sumptuous dream pop. Their landmark ninth album, 1999’s The Soft Bulletin, had channelled private reckonings with grief into a cathartic outpouring of emotion hailed as that era’s Pet Sounds. With their audience growing in tandem with their critical standing, the Lips entered the 2000s set on matching their neo-psychedelic excursions with the sounds then taking cutting-edge pop and hip-hop into the charts. More than completing their self-appointed mission, the group re-emerged in the summer of 2002 with Yoshimi Battles The Pink Robots.

“We didn’t want it to sound like The Soft Bulletin at all,” Flaming Lips frontman Wayne Coyne told this author for an interview published in Record Collector magazine in October 2020. “We don’t really know how to make another one of those. And it wasn’t what we wanted to make.”

Across lengthy sessions in producer Dave Fridmann’s Tarbox Road Studios, in Cassadaga, an hour south of Buffalo, New York, The Flaming Lips availed themselves of advances in technology while they sought to harness their obsessions with sci-fi and Big Question themes – love, life, death and the human condition in a rapidly changing world – to a crossover sound that wouldn’t compromise their ambition.

Handing Fridmann a Timbaland remix of a Madonna song, Coyne told the producer, “I think we’re gonna try to make a record like this. Wouldn’t that be fucking fun?” As the singer recalled for Record Collector, Fridmann more than agreed: “I think he secretly was like – and we’re gonna fuckin’ really do it. We’re not gonna get Timbaland to make it. We’re gonna make it.”

With Fridmann himself hitting a peak across recent records by bands such as Mogwai, Mercury Rev and Sparklehorse, and his studio becoming better equipped by the month, the Lips were in the perfect place to realise their goal. “A lot of the programmes and the apps and all the things that were just beginning to happen, in the second that they were happening, Dave Fridmann was on it,” Coyne recalled. “So we’re making a really dense, fucking cool-sounding album, and it’s getting better and better. If we were in there last month, we would go in again, and we’d remix it two months later because there’s more new shit that can make it a little bit more blammo… Then the more that we would do it, it would sound like weird music but it’s sort of disguised as music that could be on the radio.”

“No one was stopping us. No one was telling us what to do”

Also on hand during the sessions was Yoshimi P-We, drummer with experimental Japanese group Boredoms, and a crucial presence on a record whose opening salvo of songs seem to chronicle a martial-arts battle with cyborgs – or what Rolling Stone later posited as: “If The Powerpuff Girls took on Black Sabbath’s Iron Man, who would win?” (Answer: “The listener.”) Yoshimi’s guest vocals led Coyne to the album’s title. “I thought, You know, it really sounds like she’s in some kind of fight or something,” he later told Rolling Stone. “So I just thought, OK, I’ll call it Yoshimi Battles The Pink Robots, and that’ll be that.”

But while the name – and songs such as Fight Test and the title track – suggested that Yoshimi Battles The Pink Robots was a concept album, Coyne has consistently refuted the notion. Rather, as with David Bowie’s similarly star-gazing The Rise And Fall Of Ziggy Stardust And The Spiders From Mars, any overarching story has been transposed onto the record since its release, with fans extrapolating from a few key songs at the start. Indeed, rather than limit the album to one narrative, for Coyne the title “really loosened the whole feel of what we were doing. A lot of times we get into these things that are philosophical and heavy, but there was a little bit of relief when we could just say, ‘Why does everything have to be death-oriented or existential?’”

Certainly, with its polished-chrome beats, futuristic synth washes and sci-fi soundscapes, Yoshimi Battles The Pink Robots was, on the face of it, the Lips at their most upbeat. However, from album opener Fight Test onwards, it’s clear the group were still tapping into the existential crises that had made The Soft Bulletin so universally relatable.

“For the audience to embrace it… that’s otherworldly”

With a melody that nods to Cat Stevens’ Father And Son, Fight Club presents its own take on growing up – in this case, realising when it’s time to take a stand. And if Yoshimi Battles The Pink Robots Pt.1 adds encouragement in that direction – “you won’t let those robots defeat me” – Ego Tripping At The Gates Of Hell is the downbeat lament of someone who failed to take action at a crucial moment: “I was waiting on a moment/But the moment never came/All the billion other moments/Were just slipping all away,” Coyne sings, his forlorn falsetto coming across like Neil Young during a celestial seance.

Despite its chiming bells, shimmering acoustic guitar and radio-ready key changes, Yoshimi Battles The Pink Robots’ lead single, Do You Realize??, offered listeners a reminder of why they should seize life before it’s too late: good things never last; the world will continue to spin without us; “everyone you know someday will die”.

Life-affirming rather than dispiriting, Do You Realize?? was immediately embraced as one of the best Flaming Lips songs. Speaking to this author, Coyne revealed that it had been quickly put together at the end of a recording session.

“We’d already been doing a bunch of stuff and so we sort of threw it onto this song – there’s these funny Wizard Of Oz vocals and bells and things that we would do on almost every song and then take them out,” he recalled. But though the Lips initially felt that Do You Realize?? was neither more nor less remarkable than any of the other songs they’d recorded for Yoshimi Battles The Pink Robots (“We all knew it sounded like a great Flaming Lips song. But it wasn’t 100 and everything else was 20. It was 100, and everything else was like 95”), their record label’s response taught them otherwise.

“They go absolutely crazy for Do You Realize?? and start to point out that this is a special thing,” Coyne said. When the single was released, in August 2002, a month after the album, the public also took the song’s message to heart.

“We weren’t used to people talking about our music,” Coyne admitted. “We don’t like the idea that music is important – it’s just music. And people would come up to me and say, ‘Your song got me through this and that,’ and little by little we learned that it is important. And it’s important that we listen to them.

“The stuff that happens to songs like Do You Realize??, that really is up to the audience,” he continued. “That’s not something that the songwriter gets to have much say in. But for the audience to embrace it and say, ‘This song means this to me,’ that’s otherworldly.

Released on 16 July 2002, Yoshimi Battles The Pink Robots was hailed by Rolling Stone as “the most beauteous of Lips albums” and by Uncut as “astonishing… even by their standards”. With Pitchfork anointing Wayne Coyne as “a genius, equal parts Thomas Edison and PT Barnum” and praising the album for being “bold and inventive… brimming with ideas and sublime moments of brilliance”, Yoshimi Battles The Pink Robots became The Flaming Lips’ first Top 50 hit on the Billboard 200 while also scoring the group their greatest UK success to date when it peaked at No.13. Uncut would later place it at No.11 in their run-down of the best 2000s albums and call it the greatest record released since the magazine launched, in May 1997.

Despite Coyne’s objections to its reputation as a concept album, Yoshimi Battles The Pink Robots’ themes – what Billboard heard as “a sombre rumination on love and survival in an unfathomable world” – comfortably lent themselves, in 2012, to an adaptation for a stage musical which also pulled in songs from The Soft Bulletin and the Lips’ 2006 album, At War With The Mystics. Of the story that tied the songs together on stage, Coyne explained, “This girl, the Yoshimi character, is dying of cancer. And these two guys are battling to come visit her in the hospital. And as one of the boyfriends envisions trying to save the girl, he enters another dimension where Yoshimi is this Japanese warrior and the pink robots are an incarnation of her disease. It’s almost like the disease has to win in order for her soul to survive.”

Two decades on from its release, Yoshimi Battles The Pink Robots has clearly emerged victorious. “No one was stopping us. No one was telling us what to do,” Coyne told this author in 2020. Recalling how shocked the group were by the album’s reception, he added, “We were making our own records. We were making them our own way, and it was a complete surprise that, by the time we were done… people embraced it like normal music.

“It’s luck that the time that we did it, and who we were at that time, allowed it to be this cool thing instead of a torture.”

Find out which Flaming Lips tune made it into our best alternative Christmas songs.