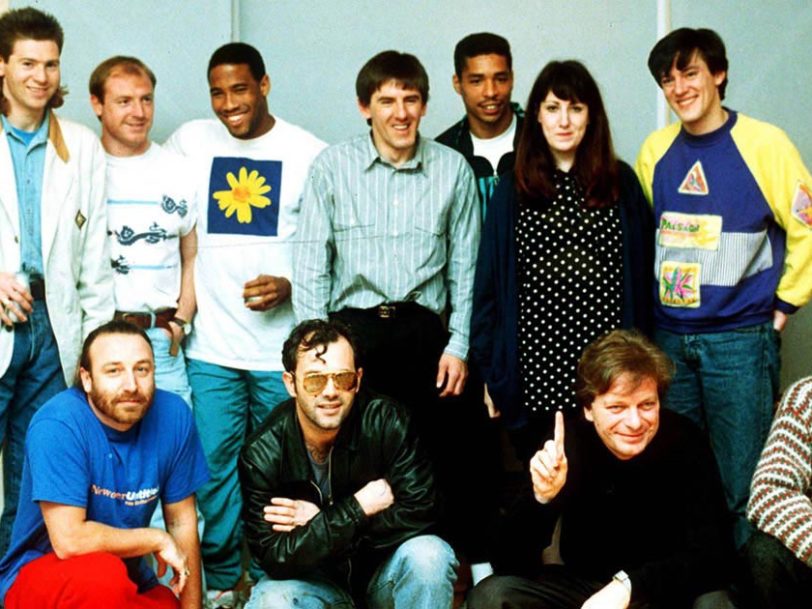 Catchy, well-crafted and credible, World In Motion saw New Order collaborate with the 1990 England squad, yielding an unlikely No.1.

As Metallica’s partnership with Lou Reed or Kylie Minogue’s liaison with Nick Cave And The Bad Seeds have proved, rock and pop can sire some truly unlikely collaborations. However, when New Order announced they were teaming up with the England national football squad to record 1990’s official England World Cup song, World In Motion, it raised more than a few eyebrows.

“The forerunner of everything good about English football”

It’s important to put this in context. In the late 80s, New Order were known as the band who rose from the ashes of austere post-punks Joy Division and reinvented themselves as chart-friendly synth-pop pioneers. Indeed, as the country was gearing up for Italia 90, New Order were at the very peak of their artistic credibility. Tapping into the on-trend sounds of Ibiza and acid house, their latest album, Technique, had topped the UK charts, and the band were seen as godfathers of the indie-dance crossover scene which was turning fellow Mancunians The Stone Roses and Happy Mondays into superstars. Why they would they write a football song?

Scratch beneath the surface, though, and you to begin to realise that the project wasn’t entirely devoid of logic. In fact, you discover New Order were offered the job primarily because of their musical innovations.

“We flew in the face of normal”

In the late 80s, the UK Football Association’s press officer was David Bloomfield (a long-term Joy Division fan and friend of Factory Records boss Tony Wilson), and he was acutely aware that the game needed an injection of credibility. Consequently, after he discovered New Order had already soundtracked the TV chat show Best And Marsh (featuring football legends George Best and Rodney Marsh), Bloomfield contacted Wilson to see if the group would be interested in submitting the Italia 90 song. In typically cavalier fashion, Wilson immediately agreed to the band’s involvement – even though New Order were technically on hiatus and working on solo projects.

Calling it “a great compliment” to be asked, Peter Hook told Manchester Evening News, “The great thing about New Order is we always used to do things for devilment. If there was something we shouldn’t do, we would do it. We flew in the face of doing anything normal and it was a great trait. So we said ‘Yes’. And of course we were then absolutely terrified as we didn’t know what to do.”

“A new low in the subterranean genre of the novelty record”

For lesser groups, football songs were often tantamount to career suicide. The 80s alone had yielded wince-worthy anthems such as Chas And Dave’s Tottenham Hotspur FC song, Ossie’s Dream, and the execrable All The Way, which trundled off the Stock Aitken Waterman conveyor belt to accompany England’s disastrous Euro 88 campaign. As Stephen Morris dryly observed in his memoir, Fast Forward, “The football song at that time was widely held to be a new low in the already subterranean genre of the novelty record.”

Nonetheless, New Order wouldn’t be deterred. They had a head start in creating World In Motion, as they redeployed Morris and Gillian Gilbert‘s instrumental theme tune for UK TV’s current affairs programme Reportage as the bedrock, but then added to it significantly, with Bernard Sumner composing a whole new section, in addition to the song’s lyric. The band then turned to another collaborator, actor/comedian and soccer aficionado Keith Allen, to concoct the song’s mid-section rap.

“He was bonkers in a wonderful way”

“Tony knew him and knew he was a crazy football fan, and Tony decided what New Order needed was Keith Allen to give us balance, as we weren’t mad football fans”, Hook recalled.

“He came along and, my god, it was like a hurricane. We were wild, but he made us [look] like kittens. He was bonkers in a wonderful way, like a Tasmanian Devil! We were open-mouthed at him! But he fitted in perfectly!”

Produced by Stephen Hague and featuring a suitably memorable chorus (“Express yourself, it’s one-on-one!”) World In Motion already sounded like a dynamic pop song, but New Order had no idea what would happen when they finally got to meet members of the England squad – or whether any of the players would be capable of adding value to the song.

“He nailed it within seconds”

After much persuasion from Tony Wilson, around half a dozen members of the team – Peter Beardsley, Paul Gascoigne, Chris Waddle, Steve McMahon, Des Walker and John Barnes – showed up for a session with New Order at Jimmy Page’s Berkshire studio. To break the ice, they were offered generous reserves of free champagne.

“Gazza downed three bottles of champagne within about 15 minutes and he didn’t even bother with a glass,” Peter Hook recalled of the midfielder. “He was hilarious. He came into the studio and was convinced it was an alien spaceship. But John Barnes really rose to the occasion. He took it over. He helped Keith Allen write much of the rap section and he nailed the performance within seconds.

“We’d just got the rap done, but then the footballers all suddenly got up as one and left,” Hook added. “I ran over and grabbed hold of one of them and asked where they were going, and he said, ‘Listen, man, we’ve got to go and open a new branch of [men’s clothing store] Top Man in Middlesbrough!’”

“World In Motion was a real coup”

New Order lost out to the clothing chain on the day, but they’d already got what they needed. With the addition of a few strategic, football-related samples (including a re-recorded version of commentator Kenneth Wolstenholme’s famous “They think it’s all over” quote, from the end of the 1966 World Cup Final – when England beat West Germany to take home the trophy), World In Motion was all set for release on 21 May 1990.

Credited to ‘ENGLANDneworder’ and accompanied by a memorable video prominently featuring John Barnes, the song struck a nerve with the public and raced up the charts. Knocking Adamski’s Killer from the top spot, it rewarded New Order with a UK No.1 – and they achieved it without sacrificing a shred of credibility.

Sadly, England didn’t quite go all the way at Italia 90, as they agonisingly lost out to West Germany on penalties in the semi-finals. Partly due to World In Motion, though, British football’s public image improved throughout the 90s, with influential England FC representative/sports entrepreneur Jon Smith subsequently admitting that the song was “probably the forerunner of everything good about English football in the 90s and 2000s”.

“It brought us together, too”

“If it hadn’t been for World In Motion, you wouldn’t have had good later football songs like [David Baddiel, Frank Skinner and The Lightning Seeds’ Euro 96 anthem] Three Lions,” Peter Hook told the BBC in 2020.

“In a funny way, it actually brought us together, too, because we hadn’t had a great time doing Technique. We were basically splitting up before then, but then we came back together to do the song. For us, and for Manchester, World In Motion was a real coup.”

Top table or mid-league? Find out where World In Motion ranks in our 20 best New Order songs.