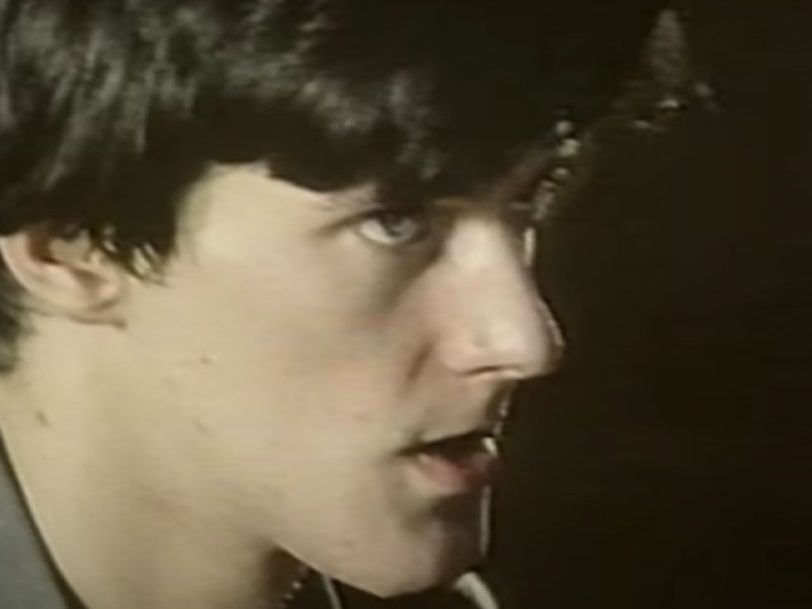 Cathartic yet catchy, Joy Division’s debut single, Transmission, showed the group morphing into one of post-punk’s most important bands.

Even after 40 years, this taut and tense track refuses to age. The musical backdrop is urgent and precise, with guitarist Bernard Sumner’s widescreen melodies punctuating drummer Stephen Morris’ insistent motorik beat and one of Peter Hook’s best basslines, while frontman Ian Curtis’ stealthy vocal delivery builds before climaxing with his repeated exhortation to “Dance, dance, dance to the radio!”

A study in controlled catharsis, Transmission is a great example of how truly original rock music can be greater than the sum of its parts. Yet, while the song is now widely accepted as a post-punk classic, the slow, lugubrious version Joy Division first recorded for their shelved RCA album in the spring of 1978 shows that it required some revision before becoming a contender.

“Playing Transmission was the first time we had a real stop-the-press moment”
“We’d recorded it for the awful Arrow [Studios] album [for RCA], but we hated that version and we’d worked on it a lot since,” Peter Hook later recalled in his book, Unknown Pleasures: Inside Joy Division. When the group were ready to unveil Transmission as they wanted it to be heard, they prepared to perform the song live for the first time at Manchester’s Mayflower Club on 20 May – a night of firsts for Joy Division.

Following their fractious, but ultimately triumphant, appearance at the career-saving Stiff Test/Chiswick Challenge gig in April, local DJ Rob Gretton had begun managing the band, and the Mayflower show was the first gig where he led his charges in public. It was also the night Joy Division first met Oz McCormick and Ed from Oz PA, the team who remained in charge of the band’s live sound when they later transitioned into New Order. Fittingly, the gig itself served as a taster of what was to come.

“Playing Transmission there was probably the first time that we had a real stop-the-press moment,” Hook recalled. “I distinctly remember playing it at that soundcheck and the crew turning around, the guys in [support act] Emergency and the other support band, The Risk, coming front of stage to watch us; the PA guys, too, were watching us instead of getting on with stuff.

“We were looking at each other, like, What the fuck’s going on here? Because we’d never experienced that kind of reaction before,” Hook added. “Looking at each other we were thinking that, maybe, just maybe, we might be able to make a go of this [playing music], a living… It was a big moment for the band. A real confidence-booster.”

Joy Division frequently included Transmission in their live sets over the next 12 months, noting that the song had the ability to blow audiences away on any number of occasions. Its power didn’t go unnoticed by insiders, either, with the band’s new manager believing they mustn’t let it languish as an album track on their debut album, Unknown Pleasures.

In his memoir Record Play Pause: Confessions Of A Post-Punk Percussionist, Stephen Morris recalled that Rob Gretton was “adamant” the band keep Transmission in reserve for a single. “We agreed it was the most commercial and radio-friendly of all our songs, in that it even mentioned the wireless in the lyrics,” Morris explained. “I’m still not sure exactly what ‘commercial’ means here. It had a chorus and was catchy. Everything you need for a hit single, I suppose. It also had that rare effect of eliciting goose bumps when it hit the chorus – maybe that was it.”

In tandem with producer Martin Hannett, Joy Division demoed Transmission at Central Sound Studios, in Manchester, during the early summer of 1979. The two parties then returned to Strawberry Studios, in Stockport, to nail the song (and its eventual flipside, Novelty) at the end of July. The session proceeded smoothly enough, though – for once – the band managed to temper their producer’s autocratic tendencies.

“Transmission was the first time we were unanimously unhappy with Martin’s mix,” Morris recalled. “Ian was especially displeased and, for once, Martin seemed to take our views on board. I don’t think he was satisfied with it either and did a remix. This time with supervision.”

In the end, Transmission realised its potential in the studio and emerged sounding streamlined and powerful. In terms of a mainstream breakthrough, it really should have taken Joy Division to the next level, but in typical Factory tradition, the single’s release was delayed and – at least at first – the song didn’t reach the heights everyone had hoped for.

“The release of the Transmission 7” proved a disappointment for [Factory boss] Tony Wilson,” Hook recalled. “He had hoped the ‘dance to the radio’ chorus would win it radio airplay. But plans to hire a radio plugger were shelved at the insistence of Rob Gretton and Martin Hannett. They felt that to promote the single was against the Factory ethos.”

Nonetheless, Transmission still played a crucial part in Joy Division’s wider acceptance. The song won over a host of new fans when the band performed an intense version for BBC Two’s Something Else in September 1979, and it also topped the UK’s then recently established Independent Chart before gaining further attention when Factory reissued it as a 12” single with a different sleeve in December 1980. Now recognised as one of the best Joy Division songs, its importance in the band’s story cannot be overstated.

“Transmission started with the bassline and turned into our first hit record,” Hook told Louder in 2017. “It’s a very simple chord sequence, very effective. You can hear that youth, that you’re a punk and you mean it in the bass riff.”

Transmission also “helped keep [Unknown Pleasures] from being displaced from the Indie Top 10”. Morris reflected. “As a bite-sized introduction to Joy Division it was perfect.”