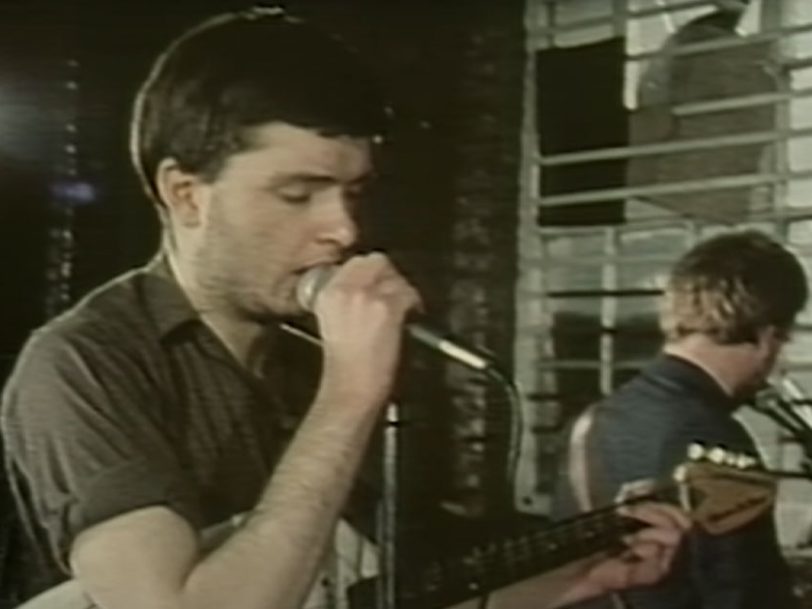 Like ‘The X Factor’ for punks, the Stiff Test/Chiswick Challenge got Joy Division noticed and led to the creation of Factory Records.

There are some notable exceptions to the rule (with Eurovision Song Contest winners ABBA probably being the most notable) but, in general, very few artists who compete in talent contests go on to launch significant careers. However, if Joy Division hadn’t performed at the Manchester leg of a touring UK talent show known as the Stiff Test/Chiswick Challenge, their future could have been very different indeed.

In retrospect, the idea of Joy Division performing at what bassist Peter Hook has described as being “like The X Factor, except for punks” stretches the bounds of credibility. Yet, in the early part of 1978, the future post-punk icons were struggling to get gigs in their native Manchester.

“After we played our first gig as Joy Division at Pip’s in January, nothing happened – not for more than two long months,” Hook recalled in his book, Unknown Pleasures: Inside Joy Division.

“For us, back then, every minute without a gig felt like a week, felt like forever. It was my turn to manage the band and I was on the phone bugging promoters – even bussing it into town to meet people, but it rarely worked. Feeling down and demoralised is a feeling you have to get used to managing any band, but especially ours at that time.”

“Being so angry gave us a bit of an edge”

With hindsight, those uncertain months early in 1978 actually did Joy Division the world of good. Unable to hustle gigs, they instead spent their time hunkered down in their new rehearsal space at TJ Davidson’s, an old disused mill on Manchester’s Little Peter Street, where they worked up the material that would form their monolithic debut album, Unknown Pleasures.

Many of the best Joy Division songs emerged during these intensive rehearsals, yet as Hook says, the band were still “hurting for gigs”. Consequently, when Joy Division got wind of a touring talent show booked in for Manchester’s Rafter’s Club, on 14 April, they were determined to get in on the action.

“We were dead keen, but the competition was fierce”

“It was set up by two London independent labels, Stiff and Chiswick, but it was Stiff we wanted to impress,” Hook recalled. “They were the cool record label. They had Wreckless Eric and Kilburn And The High Roads – later to become Ian Dury And The Blockheads – and their rep was a guy called Jake Riviera, a bit of a legend in the music business. Needless to say, we were dead keen to get on the bill, but the competition was fierce.”

Though many of Manchester’s local groups outwardly scorned the Stiff Test/Chiswick Challenge because of its London-centric air, they were still desperate to showcase their wares on the night. With at least a dozen bands vying for the limited space on the bill, the atmosphere at Rafter’s became extremely tense, with even Joy Division’s usually mild-mannered vocalist losing his rag.

“He would let frustration spill over into rage”

“Ian Curtis was many things, but one thing he was not was violent,” drummer Stephen Morris wrote in his memoir, Record Play Pause: Confessions Of A Post-Punk Percussionist. “But he could very quickly get wound up and he would let frustration spill over into rage in a Basil Fawlty manner.”

This happened at the Stiff Test, with a slightly tipsy Curtis famously spewing a stream of expletives at Granada TV’s Tony Wilson, primarily because the presenter hadn’t yet given Joy Division a chance to perform on his show So It Goes.

By all accounts, Wilson took Curtis’ harangue in good spirits and promised to put Joy Division on TV as soon as he could. However, the band weren’t easily placated, and their anger only intensified when a joke punk group, The Negatives – featuring photographer Kevin Cummins and music journalist Paul Morley – insisted on performing before them at the Stiff Test/Chiswick Challenge. By the time Joy Division finally took to the stage, it was past two o’clock in the morning and most of the audience had drifted away.

“It was probably one of our best performances”

“We did four or five songs and played our socks off,” Hook remembered. “Being so angry gave us a bit of an edge – it always did – and so it was probably one of our best performances. Well, we thought so, but we never heard from Mr Stiff, or Mr Chiswick, come to that.”

Fortunately, two people who stayed to the end of the Stiff Test were mightily impressed, and both would play significant roles in shaping Joy Division’s career.

“Tony Wilson later said it took just twenty seconds of Joy Division’s set at the Stiff Test to convince him the band were worth investing in,” Hook wrote in Unknown Pleasures. “Also, Rafter’s DJ, Rob Gretton, who had previous experience looking after [local punks] The Panik, decided he’d found a new band to manage.”

During the days following the Stiff Test/Chiswick Challenge, Gretton buttonholed Joy Division’s guitarist, Bernard Sumner, at a phone box in Manchester’s Spring Gardens and offered his managerial services. Sumner duly invited Gretton to a rehearsal, but forgot to inform the rest of the band, who were totally confused when Gretton appeared at TJ Davidson’s. Once Sumner explained, they were all smiles.

“It was like offering a lifeline to a drowning man”

“There was a collective sigh of relief,” Hook later reflected. “I wasn’t the only one who couldn’t handle managerial duties. Ian, Steve and Barney couldn’t do it, and the same went for [close mate and future road manager] Terry Mason, god bless him. But without a manager, we were fucked, so Rob arriving was like offering a lifeline to a drowning man.”

As their new manager began to organise Joy Division’s affairs, the band felt vindicated for sticking it out at the Stiff Test. Within weeks, Gretton had recovered the master tapes for the band’s debut EP, An Ideal For Living, and re-pressed it as a 12” with a different cover, featuring scaffolding on Manchester’s King Street. Doing so solved both the original 7” release’s sound problems and the accusations of fascism which had dogged the band due to the record’s original, Hitler Youth-inspired, cover design.

“From the moment he stepped on board, things changed for the better”

Gretton also succeeded in persuading Tosh Ryan, from Manchester indie label Rabid Records, to buy and distribute the rest of the 7” and 12” editions of An Ideal For Living. He ensured the band were paid upfront, too, meaning the bank loan Ian Curtis had taken out to finance the EP’s recording could be paid back. If all that wasn’t good enough, Gretton also began to book gigs for the band.

“From the moment he stepped on board, things changed for the better,” Hook wrote in Unknown Pleasures. “He was a big guy, he had a biting tongue and he could cut you dead, but in Rob, we had someone who shared our vision and had the same ideals. He was like a more forthright version of us and when he became our manager after the Stiff Test, our relationship with Tony Wilson developed, leading to the creation of Factory Records. From then on, we got better and better as a band.”