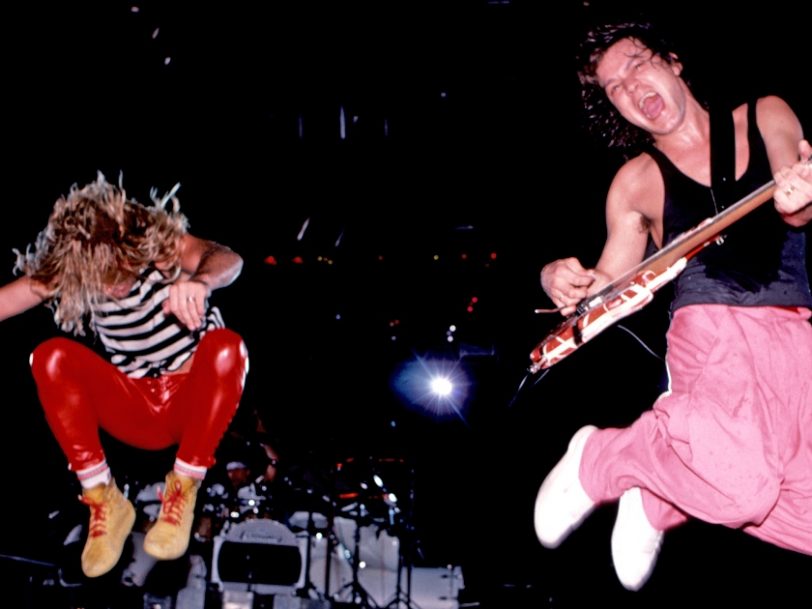 Jump: How Van Halen Leapt Ahead Of The Competition

Eddie Van Halen’s name demands inclusion among rock music’s best guitarists, yet, ironically, it was his lesser-celebrated keyboard skills which provided the bedrock for his band’s signature hit, Jump.

Released as the lead single from Van Halen’s multi-platinum sixth album, 1984, the song shot to No.1 on the Billboard Hot 100 and its runaway success skyrocketed the band to superstardom. However, Eddie had perfected Jump’s infectious keyboard riff as early as 1981, when his crew were recording their fourth album, Fair Warning.

Listen to the best of Van Halen, here.

“Everything I touch blows up”

“I wrote it either before or during the sessions,” Eddie later told Classic Rock. “Not quite the way it’s on the record, but musically, it was – note for note – exactly the same.” Jump was, the guitarist recalled, written on “a Prophet 10 synth that blew up on me. It started smoking, you know – everything I touch blows up. The way I like sound is on the verge of dying.”

While the blueprint for Jump was initially shelved, it wasn’t forgotten. The song was dusted off during the 1984 sessions, during which Eddie was keen to make synthesisers more prominent in the band’s overall sound. In Neil Zlozower’s Van Halen: A Visual History 1978-1984, producer Ted Templeman recalled that much of the finished track came together in Eddie’s then newly constructed home studio in California.

“Engineer Don Landee and Ed put the track down alone in the middle of the night,” Templeman said. “We recut it in one take for sonic reasons. Dave [Lee Roth, singer] wrote the lyrics that afternoon on the backseat of his Mercury convertible.”

Confirming that he penned Jump’s lyric while band roadie Larry Hostler drove him around as he listened to the tune on repeat, Roth revealed that an incident he’d previously seen on the news inspired the words.

“I was watching the news on television one night and there was a fellow standing on top of the Arco Tower in Los Angeles, and he was about to check out early, take the 33-storey drop,” Roth told Classic Rock. “There was a whole crowd of people in the parking lot downstairs yelling, ‘Don’t jump, don’t jump!’ and that gave me the idea of ‘Jump’ for the title. I wrote it down and it made it onto the record, although in a much more positive vein. It’s easy to translate it the way you hear it on the record as a ‘go for it’ attitude, a much more positive sort of affair.”

Propelled by its grandstanding keyboard riff and a pumping rhythm section, and further bolstered by one of Eddie’s most expressive guitar solos, Jump bore all the hallmarks of a substantial crossover hit. The song’s cause was also strengthened by its promo video, directed by Pete Angelus and David Lee Roth. Though effectively a straight performance clip, its energy was palpable, and it ended up receiving three MTV Video Music Award nominations (winning the Best Stage Performance category) and only narrowly missed out at the Grammys, where Prince’s Purple Rain shaded it for Best Rock Performance.

“Where did it come from? I don’t remember”

By the time Van Halen received the silverware, Jump had already elevated them into rock’s big league, and it remains one of the best Van Halen songs. Following its release, on 21 December 1983, the single shot to No.1 on the Billboard Hot 100, where it knocked Culture Club’s Karma Chameleon off the top spot in February 1984 – and there it sat until the end of March, when it finally succumbed to Kenny Loggins’ Footloose. Jump’s performance also helped broker big sales for its parent album, which yielded two further us Top 20 hits, in the shape of Panama and I’ll Wait, on the way to going diamond after moving over ten million copies in the US.

Indeed, Jump kept working for Van Halen long after their 1984 album campaign wound down. The band’s next four records – up to and including 1995’s Balance – all went multi-platinum, and the group managed to notch up most of this success in the period after Sammy Hagar replaced Dave Lee Roth as their frontman, in 1985. Their first album with Hagar, 1986’s 5150, even topped the Billboard 200 – an achievement doubtless aided by Van Halen’s popularity following the release of Jump. All in all, it was an impressive yield for a song written by the group’s guitar hero on his secondary instrument.

“I just happened to be very much into playing keyboards at the time,” Eddie reflected in 2012. “So, because I was playing so much piano and keyboard, somehow a keyboard song came through me. Where did it come from? Some experience. I don’t remember if it was getting my ass kicked down the street, or a girlfriend breaking up with me, or a bad hot dog or what. We’re all filters, you know? Or sponges. You soak stuff up, you squeeze it out, [and] whatever comes out, well… it was Jump, that time.”