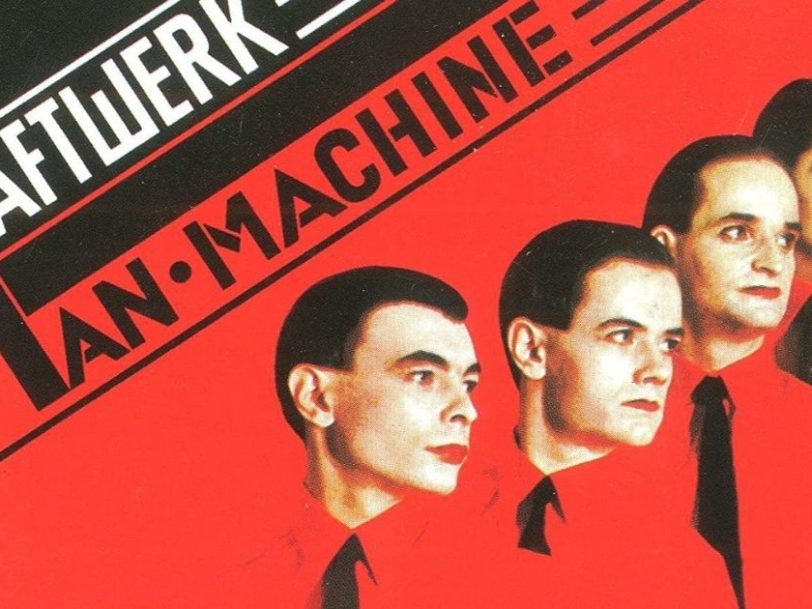 ‘The Man-Machine’: How Kraftwerk Assembled An Electro-Pop Classic

Influenced by disco, Kraftwerk’s ‘The Man-Machine’ saw ‘the robots’ take over the dancefloor and pre-empt the rise of synth-pop.

Finding themselves at the vanguard of cutting-edge music in the late-70s, German electronic pioneers Kraftwerk had become the darlings of experimental pop thanks to the driving rhythms of Autobahn and the hypnotic synthesiser work of Trans-Europe Express. As they began recording their seventh album – provisionally titled “Dynamo”, but eventually released The Man-Machine – at their own Kling Klang studios, in Düsselfdorf, the band were conscious of moving beyond their teutonic underpinnings by taking inspiration from Donna Summer’s 1977 electro-disco hit I Feel Love, masterminded by Italian producer Giorgio Moroder.

Listen to ‘The Man-Machine’ here.

Arguably lighter and more accessible but no less dynamic, Kraftwerk’s retro-futurist concept album The Man-Machine was released on 19 May 1978 and made a beeline for the discothéques while exploring themes of techno-utopianism and even space travel. “The dynamism of the machines, the ‘soul’ of the machines, has always been a part of our music,” Kraftwerk mainman Ralf Hütter explained. Now fully portraying themselves as robots with vocodered voices, Hütter, Florian Schneider, Karl Bartos and Wolfgang Flür set out to embody the merging of technology with the human soul on what was their most prescient and forward-thinking work to date.

“The image of the robot is very important to us”

Taking the mannequin pop of Showroom Dummies, from their previous album, Trans-Europe Express, to the next level, Kraftwerk hired Munich-based company Obermaier to create robotic doppelgängers of themselves, to create the illusion that their music was created entirely by androids. Launching the album in April 1978 with a press event at Tour Montparnasse, in Paris, Kraftwerk’s bionic dummies graced the stage dressed in red shirts and black ties, leaving audiences awestruck with songs that twinned the group’s minimalist electronic beats with AI-imbued lyrics that sounded like they were penned by computer-generated overlords. Here was mood music from a far-distant future.

Album opener The Robots acted as the group’s robo-pop manifesto: a revolutionary composition that sonically brought the wildest imaginings of sci-fi author Isaac Asimov to life. “The image of the robot is very important to us,” Florian Schneider said. “It’s stimulating to people’s imaginations… The robots may be an image, a projection, a reflection, a mirror of what happens.” With its mechanical groove, evocative Micromoog synth hooks and emotionless, machine-like vocals, The Robots was a danceable track that disembodied itself from the club-based antics of the disco throng (“We’re functioning automatic/And we are dancing mechanic”).

With a red album cover that imitated 20s Soviet-era propaganda posters, The Man-Machine saw Kraftwerk pose like pale-faced avatars from a totalitarian regime, parodying the dehumanising effects of communist rule and tapping into their love of modernist art. “We commissioned the Düsseldorf graphic studio Klefisch to create this sensational design, imitating the 20s poster art of the Russian artist El Lissitzky,” Wolfgang Flür wrote in his memoir, Kraftwerk: I Was A Robot. “Many people later misunderstood the cover shot, finding it too fascist. They were unable to understand that it was pure irony to us.” Artistically, the cover harked back to a bygone pre-fascist era, despite Kraftwerk’s music being decidedly futuristic. “Our roots were in the culture that was stopped by Hitler,” Ralf Hütter later explained. “The school of Bauhaus and German Expressionism.”

It wasn’t just 20s visual art that provided the band with inspiration. Reportedly playing on a loop in the studio during the making of the album was the 1927 film Metropolis, a visionary work of sci-fi that featured a Maschinenmensch (Machine-Person) that would later inspire the design of C-3PO in the 1977 movie blockbuster Star Wars. “We were very much influenced by the futuristic silent films of Fritz Lang,” Hütter said. “We feel that we are the sons of that type of science fiction cinema.”

Seeing Kraftwerk as Lang’s house band, The Man-Machine unfolds like the synthesiser-based soundtrack Metropolis never had, capturing the same artistic preoccupations beholden to futurists. The instrumental Spacelab certainly fits this sci-fi vibe, providing a pulsing ode to the European space-travel program and alluding to the rocket scientist and NASA engineer Werner Von Braun. Just ten years before, man had walked on the moon; now Kraftwerk were headed for the stars with the ambient sprawl of their music.

Side One of the original vinyl album closes with another instrumental, Metropolis. Though taking its name from Lang’s aforementioned film, the track replaced the director’s dystopic vision with Kraftwerk’s breed of technological utopianism. “Historically, we feel that if there were a music group in Metropolis, maybe Kraftwerk would have been that band,” Ralf Hütter said. “I think the records are, to us, like film.”

“In the disco, the spotlight is on everybody”

By 1978, Kraftwerk were living in a different world of their own creation. However, they weren’t entirely divorced from the contemporary music scene. With disco raging, the group decided to mix the album at Studio Rudas, in Düsseldorf, working with African-American engineer Leonard Jackson, who flew in from Los Angeles to oversee proceedings.

Having worked with Norman Whitfield – the producer of Rose Royce’s 1976 hit, Car Wash – Jackson was surprised to discover that Kraftwerk were white, so convinced was he by the funky tilt of The Man-Machine’s grooves. Lending a disco-inspired gloss to the album’s flow, Kraftwerk were well aware that a more danceable fusion of their cerebral sound could underscore the record’s themes. “If you go to see a band or a group, all the lights are on the stage which is a very fascist sort of situation,” Hütter explained, “In the discotheque, the spotlight is on everybody.”

The second half of The Man-Machine kicks off with The Model. Arguably one of the best Kraftwerk songs of all-time, it would later get to No.1 in the UK, in 1981, after it was reissued as the flip side of the Computer Love single. Allegedly inspired by fashion model Christa Becker – a claim which Ralf Hütter denied – the song was inspired by the band’s experiences in Düsseldorf, the city at the heart of Germany’s 70s fashion scene, as well as by a popular nightspot for models called The Bagel, in Köln. Knowingly arch and playful, The Model boasted consumerist lyrics that satirised people’s obsession with beautiful girls while hinting at the narcissistic motivations that drove its subject (“She plays hard to get, she smiles from time to time/It only takes a camera to change her mind”). “It’s about the context of an object, paying money: for beauty we will pay,” Ralf Hütter told Uncut in 2009.

Düsseldorf again takes the spotlight on Neon Lights, an atmospheric tribute to the city’s neon-lit nightlife and the seductive glow of its shops. With its layers of synthesisers, Kraftwerk perfect their blend of melancholia with futuristic expressions of wonder. An electro-ballad, Neon Lights takes listeners on an amble through an illuminated urban street with a beat that shimmers like the twinkling lights of a mirrorball, bathing itself in the ambience. As The Man-Machine’s closing title track comes into view, so too does a repetitive vocoder refrain from the group’s robotic avatars, propelled by an arpeggiated synth hook beamed straight from the future. Like time travellers from another galaxy, Kraftwerk had transported listeners to a parallel dimension.

Upon its release, The Man-Machine sold 200,000 copies in France and graced the Top 20 in Germany, even achieving gold disc status in the UK, where it reached No.9 in the charts. Critics were unanimous in their praise for the album, giving further proof – as if it were needed – that Kraftwerk were the leading purveyors of retro-futurist synth-pop. Successfully capturing the zeitgeist better than any other group, in depicting themselves as robots Kraftwerk deployed a masterstroke that not only further popularised their use of synthesisers but also gave the world a utopian vision of a future where technology reigned supreme.

By invoking the sound of futuristic cyborgs, Kraftwerk had made it clear that embrace of modern technology doesn’t strip away music’s soul; if anything, it enhances it. While many still fret over the transhumanist concept of singularity – the point at which humanity and technology merge to transcend our corporeal limitations – Kraftwerk have always been its biggest cheerleaders. Speaking to Starlog magazine in 1978, Ralf Hütter explained: “The machines are part of us and we are part of the machines. They play with us and we play with them. We are brothers. They are not our slaves. We work together, helping each other to create.”

By the late 70s, the world was clearly catching onto Kraftwerk’s way of doing things, and the band would soon be cited as a key influence on synth-pop groups such as The Human League, Depeche Mode, Duran Duran and Orchestral Manoeuvres In The Dark. “People fear losing their humanity to technology. That’s nonsense,” Hütter said. “A human being in contact with a machine becomes more of a human.”

Moving on from the Year Zero mentality of punk rock, contemporary musicians were now swapping guitars for keyboards and electronic drum machines, taking inspiration from the pioneering spirit Kraftwerk had ushered in. A key influence on early hip-hop and the evolution of dance music, after The Man-Machine nobody else could claim to have shaped the sound of 80s pop more than Kraftwerk. The robots had risen, and we have Kraftwerk to thank for it.