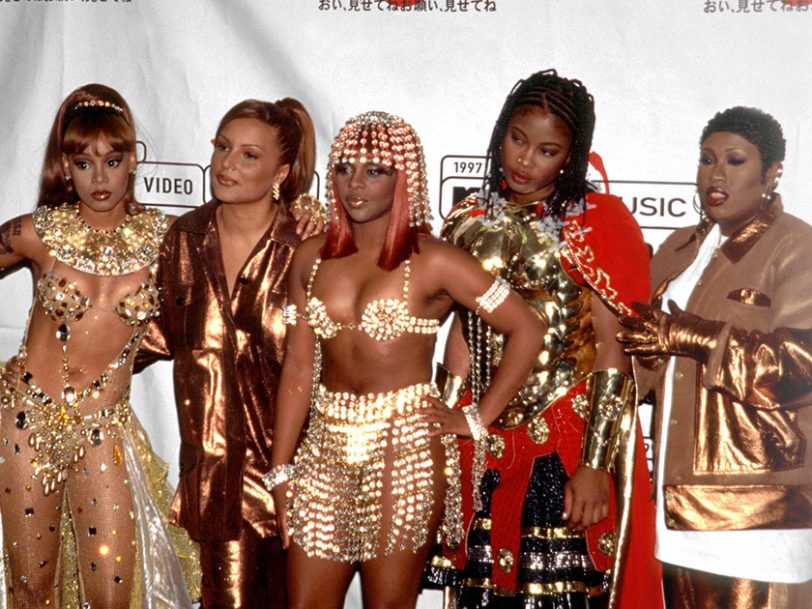 With her debut album, ‘Supa Dupa Fly’, Missy Elliott revolutionised the sound and look of hip-hop and pop music for the 21st century.

When Missy Elliott recorded her debut album, Supa Dupa Fly, in a two-week sprint with co-producer Timbaland, she initially thought of it as a diversion from her main hustle as a behind-the-scenes songwriter. “I was comfortable just writing for people. And I mean really comfortable,” she told Spin magazine shortly after the album’s release. And with good reason, too: Elliott was already reshaping pop music in the late 90s, having earned credits on tracks by new jack swing acts New Edition and Jodeci, slick R&B loverman Ginuwine, neo-soul siren Aaliyah, and Total, an all-girl three-piece that brought some feminine energy to Puff Daddy’s hypermasculine Bad Boy stable. But after making a 30-second cameo on a remix of Gina Thompson’s 1996 hit The Things That You Do, there was an immediate clamour to have Elliott step out centre-stage herself.

Elliott’s reluctance to do so was understandable. As part of Sista, an R&B outfit she’d formed with three schoolfriends in the early 90s, she’d signed to producer DeVanté Swing’s Swing Mob label and watched with disappointment as the album they recorded got shelved. Heading back to her hometown of Portsmouth, Virginia, she holed up in the studio with her songwriting collaborator, Timbaland, and concentrated on making beats and coming up with rhymes for other artists to sing. So while a bidding war erupted around the “hee-hee haw-haw” girl, and major labels sought to entice her back to the mic, Elliott wasn’t about to let anyone else take control of her music again.

“Every label out there was trying to get me to sign to them and I wanted to have a record label instead of being an artist,” Elliott later told Vinyl Me, Please. Sylvia Rhone, CEO of Elektra Entertainment Group, offered Elliott a deal: a label in return for an album.

With Elliott now head of her own imprint, The Goldmind, Inc, she booked a fortnight in Virginia Beach’s Master Sound Studios with Timbaland, with a view to meeting her obligation and then getting back to business: “I was like, ‘Tim, let’s go in here and do this album real quick so I can get started on my label.’”

What emerged, on 15 July 1997, would change not only the course of Elliott’s career, but the courses of hip-hop, R&B and pop music.

“We give our music a futuristic feel”

You can take your pick from Supa Dupa Fly’s many innovations. Later praised by Pitchfork for being a “a radically empathetic statement of self”, its swerve away from gangsta rap posturing, baller braggadocio and East Coast-West Coast antagonism wasn’t just an accident of geography: with her debut album, Elliott created a space where women could express themselves away from hip-hop’s male-dominated arena. But where Best Friends was a paean to female friendship in the face of men who “don’t act right” – a guesting Aaliyah acting as Elliott’s confidant – and Why You Hurt Me told a more familiar tale of downfall for a “loose bootie” friend who “turned tricks to get some Gucci”, cuts such as Sock It 2 Me brought female sexuality into the picture without crossing the sometimes porous boundary between reclaiming the body and simply reframing it for the male gaze.

Not that Elliott didn’t own the way she looked. In the promo videos that came with each of Supa Dupa Fly’s singles – The Rain (Supa Dupa Fly), Sock It 2 Me, Beep Me 911 and Hit ’Em Wit Da Hee – she stepped out in an outlandish array of costumes that redefined hip-hop styling in an era when The Notorious B.I.G.’s Hypnotize clip seemed to embody everything about the budget-burning lifestyles rappers flaunted. With an altogether different approach in mind, Elliott enlisted Biggie’s sometime director Hype Williams (Warning, Mo Money Mo Problems) to help set a new standard. “We wanted to make fun of the ways record companies try to make Black women look white. Fake hair, fake music,” she said at the time.

Twenty years later, she would tell Vinyl Me, Please of her early discussions with the director: “The way he described my music to me, I knew that he got it. He’s like, ‘Yo, this is some futuristic shit, so… we gon’ have to take it there.’ And I’m like, ‘Well, let’s go.’”

From the now iconic inflatable leather suit she wore in The Rain (Supa Dupa Fly) to the Afrofuturist setting of Sock It 2 Me and the neon colour schemes of Beep Me 911, the videos brought George Clinton’s intergalactic P-Funk playfulness into hip-hop as it approached the new millennium. Establishing Elliott’s own unique universe, they more than matched the quantum leap in sound she and Timbaland took on Supa Dupa Fly.

“We had no clue that it would be game-changing”

With sampling still largely running the game, Bad Boy head honcho and Biggie executive producer Puff Daddy had taken that approach to its furthest extreme with his knack for picking monster old-school hits and super-charging them into top-of-the-line chart missiles. In their Portsmouth lab, however, Elliott and Timbaland were making beats out of anything they could find – vocal tics, found-sound percussion, jittery drum machine patterns which chimed as much with Prince’s future-shaping 1999 album as they did the similarly radical music Virginia’s other rising super-producers, the Pharrell Williams-led Neptunes, were making down the way. “The studio was like our playground,” Timbaland told The Fader ten years later. “You work but sometimes it’s about looking at other things, watching videos, having conversations. A day in the studio was more like a day outside on the block.”

“Timb would maybe find three sounds and I’d just rap or sing something over those three sounds and once I laid my vocals, then he would build everything around that,” Elliott later explained. When they did use recognisable samples, it was sparingly, but to maximum effect, as on the doomy retooling of the horn intro from The Delfonics’ 1968 Philly soul hit Ready Or Not (Can’t Hide From Love), which gave Sock It 2 Me its dramatic throughline, or the lift from Ann Peebles’ 1973 ballad I Can’t Stand The Rain. Married to a squelchy synth bass and also recalling, for younger ears, the hauntingly sparse version of the song Tina Turner recorded for her Private Dancer album, it gave The Rain (Supa Dupa Fly) the right bounce for Elliott’s free-associative rhymes, taking in pre-emptive breakups, throat-tickling tokes and Elliott’s fast-growing trademark sound effects (“Beep beep. Who got the keys to the Jeep? Vroooooooom”).

“When I need some inspiration now, I listen to it”

“We really just came out with a sound that we had been doing for some time, but we had no clue that it would be game-changing, that we would change the cadence – the sound of what was happening,” Elliott told Grammy.com ahead of Supa Dupa Fly’s 25th anniversary. Just as prescient as Timbaland’s beats were Elliott’s vocal throwbacks to her earlier career. Though she was stepping out as a rapper, honing skills she would quickly perfect, she balanced her burgeoning talents as an MC with the smooth vocals of her R&B girl-group days. Indeed, the first appearance Elliott makes on the album, on Hit ’Em With Da Hee – following a typically madcap intro skit from Busta Rhymes and a hype-building first verse from the no-messing Lil’ Kim, delaying the headliner’s arrival as long as possible – she glides smoothly in, crooning about how she doesn’t need her lover’s car – “’Cause I’ve got my own ride and a trunk full of tunes” – before hitting listeners with a chorus that reminded everyone of the Gina Thompson feature that brought her here in the first place.

Though hip-hop and R&B now have an openly fluid relationship, sliding so simply between the lyrical acrobatics of rap and the melodic cadences of R&B seemed like a radical gesture at a time when the two were treated by both fans and artists alike as entirely separate entities. “I didn’t ever look at it as being risky,” Elliott told MTV News. “I looked it at as being the best of both worlds because if you wasn’t a person who was into hip-hop or rap like that, you got a chance to enjoy the singing part. If you was straight hip-hop, then you got a chance to enjoy the rap part of it… Just because I loved both, I tried to intertwine them all the time.”

“Missy always had a vision – she had a major vision,” Timbaland told The Fader. “She had a vision to entertain, and I had a vision to get my sound out to the world… Coming from Virginia and trying to get your sound out there, you had to be great to be heard.” Elliott may have told Spin magazine that the nickname she took at the time – “Misdemeanour” – was picked for no other reason than that it sounded good (“That’s all. It’s nothing deep”), but it hinted at a proclivity for rule-breaking that permeated every aspect of Supa Dupa Fly. With hip-hop still reeling from the deaths of Biggie and Tupac, she showed that the music could be fun again – not just in her presentation, but in the playful boasts of They Don’t Wanna Fuck Wit Me and the nonsense chorus lines of Izzy Izzy Ahh. Even an interlude such as Bite Our Style rolls out with a welcome “fa-la-la-la-la” frivolity when held against the prevailing trend for lengthy skits re-enacting drug-deal encounters and other felonies.

“When i 1st came in the game people laughed at me doing sound effects in my music… but then I kept doing wild sounds/crazy adlibs in my songs & people began to rock wit it,” Elliott tweeted in August 2021. “Years later those same sound effects are big in songs today.” Indeed, rappers and producers would soon take huge chunks out of Supa Dupa Fly and pass them off as their own ideas. Impossible to outpace, Elliott and Timbaland remained well ahead of the pack into the 2000s, expanding and refining their craft across the follow-up albums Da Real World and Miss E… So Addictive. Even now, Elliott has admitted, she turns to her debut for ideas, hearing it in new possibilities for future work: “A lot of times, when I need some inspiration now, I listen to it,” she told Grammy.com, “because I feel like we were in such a vulnerable place we didn’t have any kind of expectations, so we just did what felt good to us.”

Writing three months after Supa Dupa Fly came out, The New Yorker’s Hilton Als noted, “Six months ago, few people outside the music industry had heard of her; six months from now, it will be necessary to pretend that you’ve known about Missy Elliott for years.” Over a quarter century on, Elliott’s status among the most influential female musicians of all time is undisputed. As Spin magazine put it: “Missy’s strongest statement is her mere existence. She’s a Redefining Woman in Hip-Hop.”

Find out where Missy Elliott ranks among the most influential female musicians of all time.