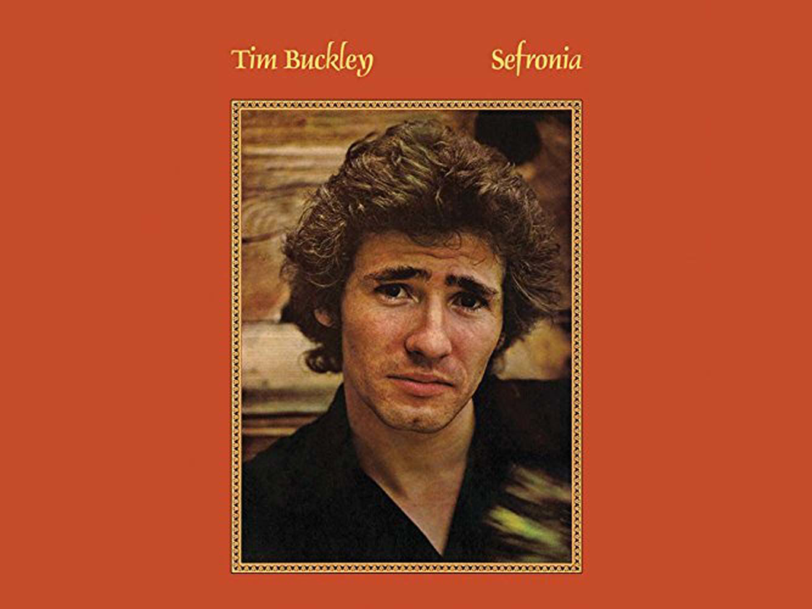 Sefronia, released in May 1973, was Tim Buckley’s eighth studio album, and his first on DiscReet, a record label founded by Frank Zappa and his business partner Herb Cohen. There are, however, only two Buckley originals – Quicksand and Stone In Love – on an album whose 11 tracks are, in the main, a blend of collaborative writing and cover versions.

Dolphins, the first cover song, is Sefronia’s stirring opening track, and was written by Buckley’s Greenwich Village friend, folk singer Fred Neil (of Everybody’s Talkin’ fame). Buckley had been singing Dolphins since his early teenage years and admitted that it had taken him a long time to get it right. There is also a lushly orchestrated version of Tom Waits’ gorgeous ballad Martha, featuring orchestral arrangements by David Blumberg, a man who had written string arrangements for Diana Ross, Smokey Robinson and Stevie Wonder.

Buckley also covered Sally Go ’Round The Roses, which had been a hit in 1963 for the Bronx-based group The Jaynetts. The final cover, I Know I’d Recognise Your Face, was co-written by Letty Jo Baron and Denny Randell, the man who produced Sefronia and played keyboards on the album. Elsewhere, I Know I’d Recognise Your Face, a routine pop song, featured neat interplay between Buckley’s baritone voice and the female backing singers Marcia Waldorf, Sharon Beard, Myrna Matthews and Lisa Roberts.

“Soulfully, its my best for that type of song”

Buckley was close friends with the award-winning poet Larry Beckett (“Tim and I had phone calls lasting through the night,” said Beckett), and the pair combined to write the funky Honey Man and Sefronia’s title track, which was listed as two songs: Sefronia: After Asklepiades, After Kafka and Sefronia: The King’s Chain. Beckett said he drew on James George Frazer’s The Golden Bough: A Study In Comparative Religion, a book about African taboos, for inspiration.

Beckett and Buckley also combined to compose Because Of You, which stands among the best Tim Buckley songs. “I think, soulfully, it’s my best for that type of song,” said Buckley in 1974. “And, let’s see, Joe Falsia is on it playing guitar, and Bernie Mysior on bass, Buddy Helms on drums, myself on 12-string. And I kinda like it. It has that good African-Latin feel… plus, it has a good pattern, good melody.”

Drummer Helms later revealed that the two Sefronia tunes, which amounted to under six minutes in total, originally featured a long instrumental bridge that resulted from jamming in the studio. “As far as an extended instrumental section, that was cut out. It was just cold-blooded commercial editing, I think,” Helms said.

Beckett said he considered Buckley to be “just a natural born musician”, and that his pop star friend’s background and upbringing exposed him to a diverse set of musical influences (Buckley’s mother would often play her son records by Johnny Cash, Pete Seeger and Frank Sinatra). Sometimes Buckley’s desire to be ambitious didn’t quite come off. One of the less successful tracks on the album was a cover of Fred Freeman and Harry Nehls’ composition Peanut Man, a song in the vein of Harry Nilsson’s Coconut.

Sefronia’s cover image, picturing Buckley sporting a wry expression, was taken by Ed Caraeff, a man whose photographs adorn hundreds of album covers and whose portrait of Jimi Hendrix at the 1967 Monterey Pop Festival is considered a classic. Caraeff, who also shot the cover image for Buckley’s albums Happy Sad and Lorca, said: “I liked Tim Buckley’s music before I got the call to photograph him. His shows at the Troubadour were always a hot ticket.”

Though Buckley was drinking heavily at the time of making Sefronia, he was singing as well as ever in this period and was pleased with the album’s reception. He even promoted the UK release of the album with an opening slot at the first ever Knebworth Festival. Sadly, Sefronia would prove to be Buckley’s penultimate album before his tragic death in 1975 at the age of just 28.

Check out our best Tim Buckley songs to find out which Sefronia tracks made the cut.