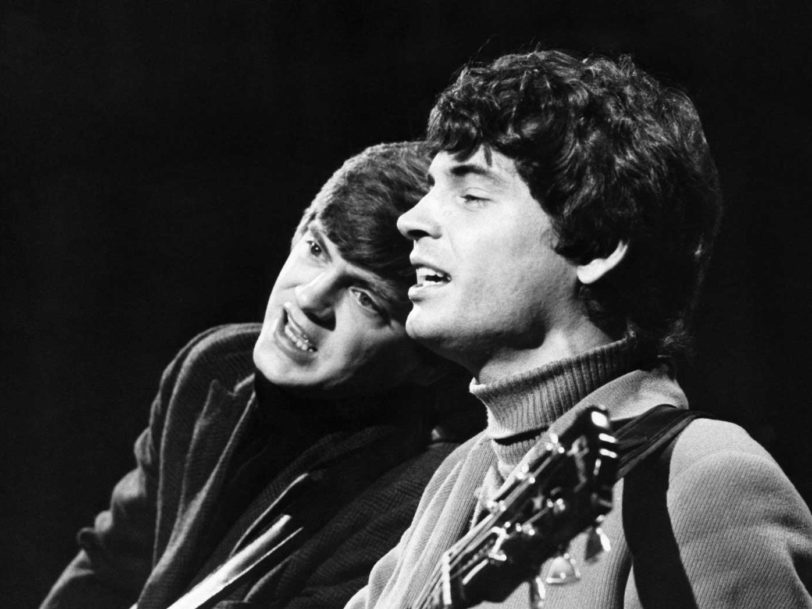 Influencing everyone from The Beatles to Van Morrison, the best Everly Brothers songs sum up the innocence of 50s romance.

Don and Phil Everly made up the most revered vocal duo of the rock’n’roll era, their exquisite harmonies profoundly influencing The Beatles, The Beach Boys and Simon And Garfunkel. The brothers, the sons of country music duo Ike And Margaret Everly, began playing on country radio by the time they were seven. During the height of their popularity, in the late 50s and 60s, the duo had nearly three dozen chart hits. Which of these make the cut among our 10 best Everly Brothers songs? Find out, below…

During the 60s, The Everly Brothers made 14 great albums for Warner Bros, starting with It’s Everly Time in May 1960. The opening track, So Sad (To Watch Good Love Go Bad), was composed by Don Everly, who was born on 1 February 1937. The hit record, one of the best Everly Brothers songs, contained the plaintive lyrics, “We used to have good times together/But now I feel them slip away.” The tune, which was later covered by Emmylou Harris, was a Top 10 hit around the world and showcased the duo’s beautiful harmony phrasing.

The Everlys sprung from deep country roots – their mother, Margaret, was a fine singer and their father, Ike, was an accomplished singer and fingerstyle guitarist – and they covered country songs such as Lightning Express early in their career. In 1963, they cut a whole album of their favourite roots songs, The Everly Brothers Sing Great Country Hits, featuring their interpretations of classics by Hank Williams, Don Gibson and Johnny Cash. One of the highlights was their version of Silver Threads And Golden Needles, a song written by Dick Reynolds and Jack Rhode. Their version had a huge influence on Linda Ronstadt, who turned it into one of her touchstone concert songs. “They had that sibling sound,” said Ronstadt. “The information of your DNA is carried in your voice, and you can get a sound [with family] that you never get with someone who’s not blood-related to you. They were one of the cornerstones of the new rock’n’roll sound.”

Phil Everly, who was 23 months younger than his brother, wrote the song When Will I Be Loved as one of the duo’s last songs for Cadence records (when they signed to Warners, the Everlys were also in the process of parting with their manager Wesley Rose). A pulsating rockabilly tune recorded in Nashville, it took its place among the best Everly Brothers songs when it hit No.8 in the US. Legendary session musicians Chet Atkins (guitar), Floyd Cramer (piano) and Buddy Harman (drums) played on the record, which was also later covered by Linda Ronstadt. Phil Everly died on 3 January 2014, aged 74, from complications from chronic obstructive pulmonary disease.

The Everly Brothers had four UK No.1 hits in all. Temptation, which was released as a single in May 1961 and later included on the compilation The Golden Hits Of The Everly Brothers, was one of the oldest songs they ever recorded, having been a hit for Bing Crosby in the 30s. The lyrics were by Arthur Freed and the music by Nacio Herb Brown. The song, which the brothers’ parents used to sing, was also recorded by jazz great Charlie Parker. The Everlys’ version held the top spot for two weeks in June 1961.

In the early days of their career, the best Everly Brothers songs combined thrumming guitars and soulful harmonies with lyrics that summed up the innocence of 50s romance. “Never knew what I missed ’til I kissed you,” wrote Don Everly in this song inspired by a girl he met on tour. “I wrote (’Til) I Kissed You about a girl I met in Australia. Her name was Lilian, and she was very, very inspirational. I was married, but… I wrote the song about her on the way back home,” the musician recalled in 1986. The memorable drum work came from Jerry Allison, Buddy Holly’s former Crickets bandmate, who came up with the intro. The brothers’ wonderful harmonies usually consisted of Don’s lower voice typically handling the melody line and Phil adding flawless harmony a few notes above.

Walk Right Back was written by early Buddy Holly guitarist Sonny Curtis, who composed this song when he was bored on a Sunday afternoon while he was undergoing basic training. The Everly Brothers’ version was released the same day Curtis landed in France in 1960 to start his military duty overseas. “They had just gotten signed to Warner Bros. I got Don on the phone. Phil came down, and they worked out that great harmony,” Curtis recalled. They recorded the song before Curtis had the chance to show them the second verse he had written. The extra words appeared on later versions by Perry Como, Andy Williams and Anne Murray.

When The Everly Brothers signed to Warners they were handed a $1 million contract – and the success started straight away with their first single for the label, Cathy’s Clown, which turned out to be their biggest hit. The brothers co-wrote the song: “Part of the inspiration for Cathy’s Clown was the Grand Canyon Suite: domp-de-domp-de-da-da-da, boom-chaka-boom. And then I had this girlfriend called Catherine. That was the formula for that one,” Don told Rolling Stone magazine about the influence of Ferde Grofe. The song was a No.1 hit for the Everlys and, later, did the same for country music star Reba McEntire. One of the best Everly Brothers songs of the 60s, The Beatles later acknowledged it as an influence on the vocal arrangements for their hit Please Please Me.

The Everly Brothers influenced so many of the rising stars of the 60s – including Bob Dylan and Van Morrison (who used to sing their sweet hit Let It Be Me in concerts), and they ruffled a few feathers with the risqué Wake Up Little Susie – written by the great songwriters Felice Bryant and her husband, Boudleaux – about a teenage couple who fall asleep during a boring film, only to wake up at 4am and start panicking about the scandalised reaction to being out all night. “Their voices were pure honey,” said Felice Bryant. The song was a big influence on Simon And Garfunkel, who recorded a version for their celebrated 1982 live album, The Concert In Central Park.

Bye Bye Love, which was recorded in and released in March 1957, was another hit written by the Bryants. Incredibly, this classic of sorrowful pop music was rejected by more than 30 country bands and singers before the Everlys recorded it in Nashville – cementing it as one of the best Everly Brothers songs in the process. Producer Archie Bleyer came up with the arrangement on a song that also featured country legend Chet Atkins. When Bye Bye Love was released, the Everlys were still relatively unknown and about to start a tent-show tour of Mississippi and Louisiana as one of the support acts to Bill Monroe. The song, later covered by Ray Charles, was a lucrative hit. Don Everly said the first thing he did with the money was buy a new case for his guitar.

“Without Boudleaux and Felice we’d still be doing some heavy lifting somewhere,” said Phil Everly, acknowledging a lasting debt to the composers of the wonderful love song All I Have To Do Is Dream, which tops our list of the best Everly Brothers songs. On their famous version, the brothers showed all their seamless, irresistible harmony singing on a hit single that was boosted by Atkins’ tremolo guitar chording – then something of a novelty. Though The Everly Brothers parted ways acrimoniously in 1972 – not speaking to each other for years – they reunited for some acclaimed concerts at London’s Royal Albert Hall in 1983, and their version of All I Have To Do Is Dream was a triumphant highlight. “Harmony signing is the ultimate love,” said Phil. The song was inducted into the Grammy Hall Of Fame in 2004, and a terrific version features on their 1970 live album, The Everly Brothers Show, recorded at the Grand Hotel in Anaheim, California.