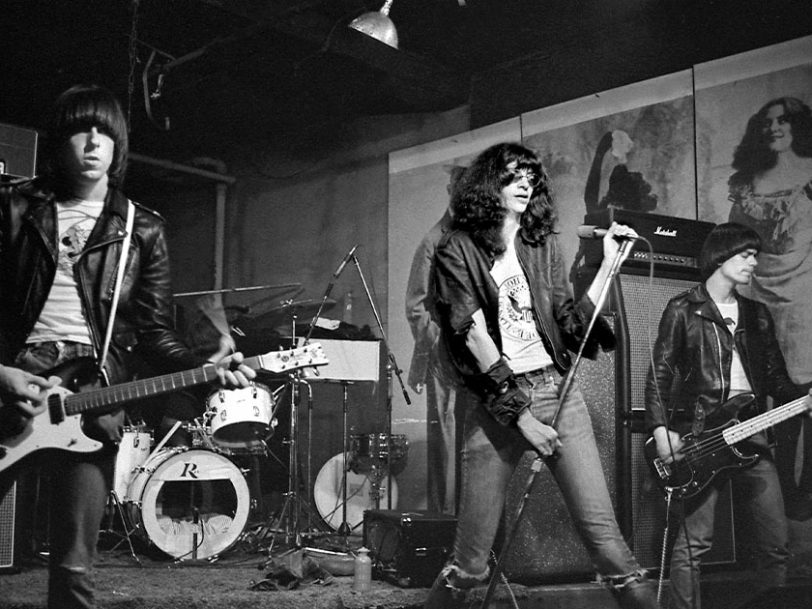 Ramones’ sublime third album, ‘Rocket To Russia’ didn’t shoot the group to fame and fortune, but it remains one of punk’s seminal records.

Received wisdom tells us that Ramones’ third album, Rocket To Russia, represents the group at the very peak of their powers, and we can only add to that acclaim. Indeed, with hindsight, it’s easy to hear how this seminal punk-pop record represents the culmination of a remarkable 18-month burst of creativity which had already birthed Ramones’ hugely influential self-titled debut album and continued with its effervescent follow-up, Leave Home.

Listen to ‘Rocket To Russia’ here.

“We were on a roll, in high gear, touring and everything,” Ramones’ original drummer and co-producer, Tommy Ramone, reflected in an interview with Rolling Stone’s David Fricke. “We thought we were gonna make it, that we were on the launching pad. Even if it was a little difficult to write the songs [for Rocket To Russia] because we had to write ’em in hotel rooms, once we got into the studio, we felt we were in control – that we were in our prime.”

Certainly, if you try to pinpoint the period in Ramones’ story where they look like becoming major players, you’d almost look to the summer of 1977. At this juncture, the band’s fantastic fifth single, Sheena Is A Punk Rocker, had just cracked the UK Top 30, and New York’s punk scene was going overground, with Ramones’ peers such as Blondie, Talking Heads and Television all signing with labels and selling records. In Manhattan, punk-friendly clubs CBGBs and Max’s Kansas City were suddenly attracting notably larger audiences, and all involved sensed something very significant was taking place.

“To be in New York that summer was to have some sense of what it might have been like to live in San Francisco in 1966 or ’67,” Village Voice journalist Tom Carson said in an interview with esteemed US rock writer Greil Marcus. “Or else in London when The Beatles and the [Rolling] Stones first hit.”

“Our playing was really tight. We thought we were only one step away from being successful”

Keen to seize the moment, Ramones reunited with engineer Ed Stasium, with whom they’d hit it off during the Leave Home sessions, and who had cemented his relationship with the group while recording Sheena Is A Punk Rocker. But through Stasium stepped up to co-produce Rocket To Russia with Tommy Ramone (credited as T Erdelyi), Tony Bongiovi – Leave Home’s co-producer and brother of Jon Bon Jovi – received the official production co-credit with Tommy Ramone.

“Sheena and [B-side] I Don’t Care had been recorded earlier in the year at [New York’s] Sundragon Studio, where we had recorded Leave Home,” Stasium told Classic Rock in 2017. “Both songs were remixed at Power Station [Tony Bongiovi’s recently opened studio] during the Rocket To Russia sessions.” Sheena Is A Punk Rocker was, the producer explained, just one example of the influence The Beach Boys had on Ramones: “Johnny and Tommy asked me to play a plunky guitar bit that was similar to [The Beach Boys’ 1964 single] Little Honda.”

Stasium also recalled that a similar bubblegum pop vibe pervaded the recording of what would become some of the best Ramones songs as Rocket To Russia came together at New York’s Mediasound Studios, a former Episcopalian church in midtown Manhattan.

Rockaway Beach was an “East Coast answer” to The Beach Boys’ Surfin’ Safari, the producer recalled with fondness, while also noting that Ramones’ supercharged attack on the 1958 hit Do You Want To Dance used The Beach Boys’ 1965 cover as a temple, resulting in a punk-pop hybrid that was “a far cry from Bobby Freeman’s Latin-flavoured original”.

Ramones were prepared to make further pop-leaning concessions in hopes of achieving radio play. According to Stasium, the group’s ever-pragmatic guitarist, Johnny Ramone, even agreed to add acoustic guitars to Locket Love in an attempt mimic Steve Miller Band’s “soft-rock California sound”. But that didn’t mean Ramones had lost their edge. In fact, a different kind of discussion, held on the very first day of the sessions, coloured the way Rocket To Russia eventually turned out.

“He considered Sex Pistols the competition”

“Johnny brought in a 45rpm copy of Sex Pistols’ God Save The Queen and played it in the control room before we started tracking,” Stasium told Classic Rock. “He considered them the competition and wanted to be sure that his ripping guitar sounded superior to Steve Jones’ tone. Personally, I have a fondness for both guitarists, but Johnny’s tone positively rips on Rocket To Russia.”

The merest exposure to the album’s harder-edged tracks, such as Cretin Hop, Teenage Lobotomy and Why Is It Always This Way, suggested that Ramones were indeed writing some the most exhilarating songs of their career. Yet, while the minimalist aspect of the band’s approach is often acknowledged, that doesn’t mean the group’s music was as simple as it may have appeared to their detractors.

“If there is a greatest Ramones song I recorded, it has to be Teenage Lobotomy,” Stasium told David Fricke. “It’s a mini-Ramones symphony. It has every element of what’s great about them in one song: the big drum intro and the ‘Lobotomy’ chant; the little background harmony ‘ooh’s and the provocative subject matter. Also, not a lot of bands have modulations in their songs, but Ramones did. They were always changing the key.”

Rocket To Russia also had the distinction of becoming the first record to be mixed at Tony Bongiovi’s new Power Station facilities, on Manhattan’s West 53rd Street. Ramones, though, weren’t able to take advantage of the state-of-the-art equipment that would later attract the likes of Chic, Duran Duran and Bruce Springsteen to the complex.

“At the time, we had very limited outboard gear, not one reverb plate or digital reverb device was yet in place,” Stasium told Classic Rock. “The very obvious reverb one hears… during the ‘Lobotomy’ chant sections was achieved by using a stairwell that ran the entire height of the building.” Using tape delay and strategically placed microphones, Stasium and the band jerry-rigged their own reverb effect.

Released on 4 November 1977, Rocket To Russia delivered one killer track after another. In the sleevenotes to the Ramones collection Hey! Ho! Let’s Go: The Anthology, Tommy Ramone recalls that completing the album brought “the feeling of release, freedom and the sense of exhilaration” because the band felt sure they’d fashioned their breakthrough disc. Vast swathes of the media agreed, with The Village Voice’s Robert Christgau declaring Ramones had created “a ready-made punk classic” and Rolling Stone’s Dave Marsh deciding, “Rocket To Russia is the best American rock’n’roll of the year and possibly the funniest rock album ever made.”

Despite these initial fanfares, Rocket To Russia didn’t fire up the charts, instead reaching a respectable No.49 on the Billboard 200. Ironically, the nascent punk movement which Ramones had inadvertently kicked off with their debut album scuppered the band’s chances of competing on the world’s biggest stages.

In his book Please Kill Me: The Uncensored Oral History of Punk, US journalist Legs McNeil wrote, “Safety pins, razor blades, chopped haircuts, snarling, vomiting – everything that had nothing to do with the Ramones was suddenly in vogue, and it killed any chance Rocket To Russia had of getting any airplay.”

“Warners were all geared up to break the Ramones, and when that didn’t happen, unfortunately they got tarnished with an image of being a cult band,” said Seymour Stein, former head of Sire Records, the Warner Bros subsidiary that had signed the group. Speaking to Everett’s True, for the biography Hey Ho Let’s Go: The Story Of The Ramones, Stein added, “Just one big hit, and they could have sold a million albums. That’s all it would have taken.”

Regardless, Ramones still went on to make a stack of great records – and they had a second crack at the big time with 1980’s Phil Spector-produced End Of The Century. In the meantime, Rocket To Russia has arguably asserted itself as the band’s greatest artistic statement. It’s often held up against the likes of The Clash’s London Calling and Sex Pistols’ Never Mind The Bollocks, Here’s The Sex Pistols, and its creators’ efforts were vindicated when Rolling Stone voted it the third greatest ever punk album of all time in 2017.

“By [Rocket To Russia] our playing was really tight. We thought we were only one step away from being successful,” Tommy Ramone told The Huffington Post in 2012. “We came into our own on that record… You put it on, and from beginning to end it’s just a great listening experience.”

Check out our best Ramones songs to find out which ‘Rocket To Russia’ track shoots to the top of the list.