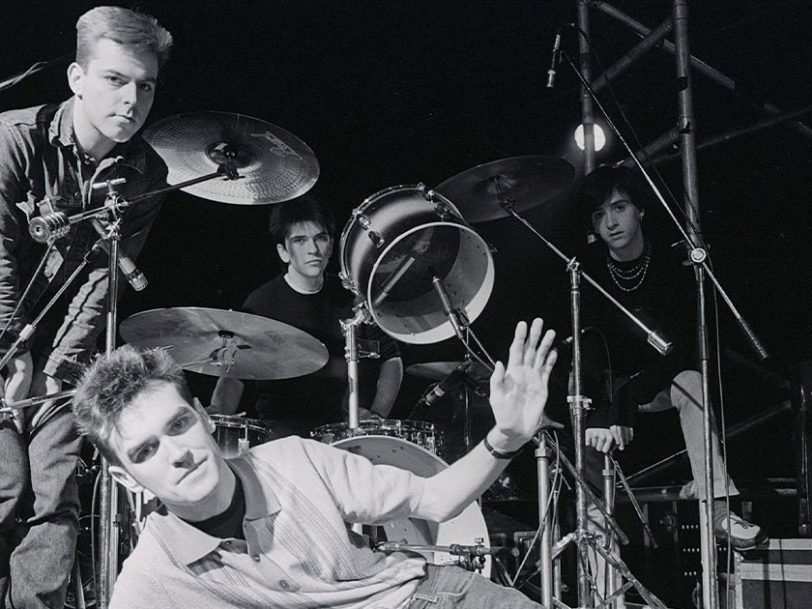 The Smiths hadn’t yet enlisted Andy Rourke, but on 4 October 1982, the band staged their debut live show at Manchester’s Ritz ballroom.

One of Manchester’s grandest listed buildings, the Ritz ballroom (now the O2 Ritz) has frequently played host to future-shaping events. Legendary acts such as The Beatles and local heroes The Hollies have trodden the boards there, and in 1961 this fine old theatre with its famous sprung dance floor even featured in Tony Richardson’s film adaptation of Shelagh Delaney’s kitchen-sink drama A Taste Of Honey. The latter fact is surely something Morrissey would have been aware of when he took to the stage for the second of his two brief appearances fronting Manchester punks The Nosebleeds. However, the singer returned to make a more lasting contribution to the Ritz’s august history when, on 4 October 1982, The Smiths made their brief yet memorable live debut at the Whitworth Street venue.

At this embryonic stage, the band’s classic line-up hadn’t quite fallen into place. Frontman Morrissey and guitarist Johnny Marr were still finding their way as a songwriting team, and bassist Andy Rourke was yet to enlist. Additionally, Mike Joyce had only been inducted into The Smiths a few weeks before the group’s live debut, but the drummer – who had cut his teeth playing with rudimentary punk outfits The Hoax and Belfast emigres Victim – was well aware that his new colleagues were light years ahead of any musicians he’d rubbed shoulders with.

“Musicality was something that had passed me by in other groups,” Joyce told The Smiths’ biographer Tony Fletcher. “Johnny’s subtlety and his texture and guitar playing was radically different from any of the players I’d worked with up to that point.”

“An Evening Of Pure Pleasure!”

The Smiths were determined to stand apart from their local scene from the off, so in that respect it made sense for them to make their live debut on a bill advertised as “An Evening Of Pure Pleasure!” Presented by local promoters John Kennedy and Andrew Berry, this Andy Warhol-esque extravaganza also featured designers, a drag artist and a dance troupe, not to mention the evening’s headline act, Blue Rondo À La Turk: a ten-piece, jazz-tinged London-based outfit who are barely remembered now but, at the time of the Ritz gig, were very hot news.

With all that in mind, The Smiths felt some pressure to succeed when they took to the Ritz’s stage for their live debut. For just this one show, the group performed with bassist Dale Hibbert, with a slightly anxious Morrissey coming up with a contingency plan that involved inviting his flamboyant friend James Maker along to dance on stage in a pair of women’s shoes.

In his book, Autofellatio, Maker – who later fronted the band Raymonde – recalled, “Morrissey invited me to appear with The Smiths as a guest. I was to present them in French, to dance in a ‘cool and understated manner’ – within the chalked circle he had drawn for me – and to sing backing vocals on What Do You See In Her?… The high-heels component was not borne of camp or frivolity but of an intellectual devotion that originates in the revolutionary sexual appearance of the New York Dolls. I also wore them because I felt like it!”

The Smiths’ live debut was relatively brief. Following the introductory music (Klaus Nomi’s The Cold Song), the group’s four-song Ritz set reputedly consisted of the only live performance of Suffer Little Children, along with The Hand That Rocks The Cradle, a cover of US girl group The Cookies’ I Want A Boy For My Birthday and a vibrant new song, Handsome Devil, which later turned up on the flipside of their debut single, Hand In Glove. The latter song, in particular, suggested Morrissey and Marr were already scoping out highly original territory for what would become The Smiths’ self-titled debut album.

“The song was imbued with something of a rockabilly riff, a natural reflection of Morrissey and Marr’s mutual interest in the genre,” Tony Fletcher later wrote. Calling Hand In Glove “notably more exuberant” than anything the duo had written to date, Fletcher added, “The lyrics, too, were more charged – and loaded with delightfully risqué couplets of both gay and straight connotations. The one that jumped out most readily from the microphone (“Let me get my hands on your mammary glands”) was Morrissey’s first act of popular, as opposed to poetic genius – and his first in a series of classic one-liners.”

Not everything went The Smiths’ way at the Ritz. Typically, as the support act, they were confined to using the limited space in front of Blue Rondo À La Turk’s equipment, while Mike Joyce also managed to split his snare drum skin during The Hand That Rocks The Cradle. However, the group completed their set intact, and the response was almost universally positive.

“He was already someone who was totally unique”

Just days later, The Smiths received their first burst of press, with influential UK magazine The Face mentioning them by name and describing the event as “the kind of live music fashion show that the British don’t attempt enough”. The ripples continued to spread thereafter, with i-D magazine keen to secure an interview with the band and record label EMI pledging to fund a second studio demo. Indeed, even at this formative stage, The Smiths’ star quality was apparent to those in their orbit.

“[The Ritz] was a great showcase for Johnny,” the group’s manager, Joe Moss, told Tony Fletcher of The Smiths’ live debut. “He had heaps and heaps of attitude and his guitar playing just soared over everything. Morrissey, too, was ten feet tall… you realised he was already someone who was totally unique out there in front of you.”