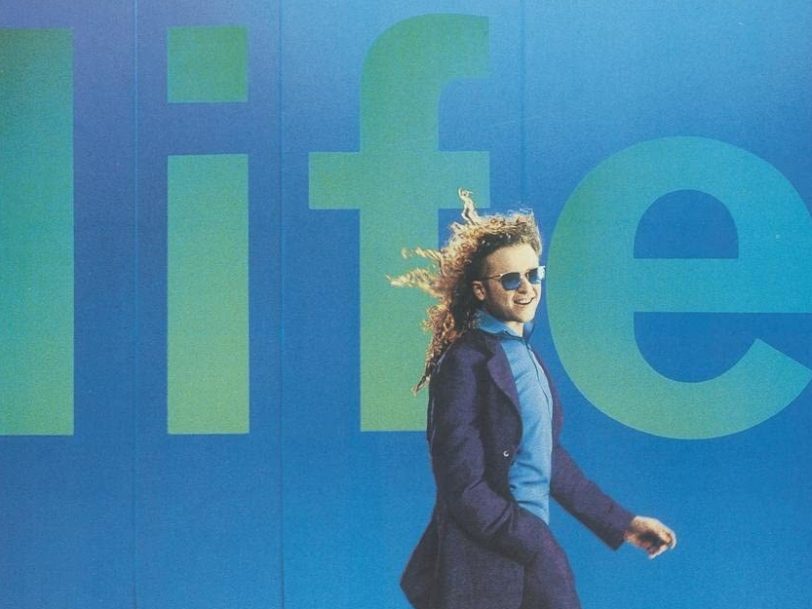 After their fourth album, Stars, became the bestselling record of both 1991 and 1992, Simply Red rounded off a world tour shining as brightly as a supernova. Brimming with confidence, frontman Mick Hucknall had once again asserted his place among the ranks of pop’s leading lights and was feeling ready to assume more artistic control over the group’s musical direction.

“I wanted ‘Life’ to be my masterpiece”

With the band enjoying a well-earned two-year break, Hucknall took his time in considering how to tackle the unenviable task of following a record that had gone 30-times platinum in Europe. Buzzing with ideas about where to take Simply Red’s next record, the singer looked to the dance music still fizzing away in clubland, while the emergence of 90s hip-hop also provided him with further inspiration. But there were challenges to overcome.

Having scored the biggest album of their career so far, Simply Red’s whirlwind success had taken its toll on the group. Gota Yashiki – the drummer who had been instrumental in transforming the band’s sound on Stars – had moved on to solo projects, leaving Hucknall and the core three-piece of Fritz McIntyre on keyboards, Ian Kirkham on saxophone and Heitor TP on guitar. The group’s long-term producer, Stewart Levine, was also absent at the start of the Life recording sessions, though this gave Hucknall, who felt he’d served his apprenticeship under the producer, a chance to step forward and shape the record’s sound himself.

The band began recording Life at Planet 4 Studios in Manchester, in September 1994. Hucknall’s songwriting was on stellar form as always, but it soon became clear that his musical ambitions were growing once again. “I wanted Life to be my masterpiece,” the singer later admitted. To help streamline Hucknall’s efforts, Stewart Levine was eventually drafted in as co-producer, and the sessions moved to AIR Studios, in London, and Downtown Studios in Johannesburg. “I didn’t think he had to worry about being trendy,” Stewart Levine later recalled. “He had this fantastic voice, and that’s what put him there.”

“I wanted it to be seen as me strolling through life”

Released on 18 September 1995, the album’s carnival-esque lead single, Fairground, introduced the public to a new-look Hucknall. In the song’s music video, directed by Michael Geoghegan and filmed at Blackpool Pleasure Beach, the Simply Red frontman sported flowing ginger dreadlocks and jumped on a rollercoaster to dive head-first into electronic dance music. With euphoric Latin-flavoured percussion adding extra flavour, the song was a timely product of 90s sample culture (guest keyboardist Andy Wright had seen The Goodmen perform their 1993 Top 5 hit, Give It Up, on Top Of The Pops and suggested Fairground could be built around its samba-style beats). An instant success, the single would go on to sell 783,000 copies, and still holds the accolade for becoming the band’s sole UK No.1.

Soon enough, Life saw the light of day on 9 October 1995. Tellingly, its light-blue artwork depicted Mick Hucknall walking nonchalantly in front of the album’s title, as if he had no care in the world. The original concept, however, was much more ambitious, as photographer Zanna was planning to create a 60-foot art installation at the Royal Horticultural Society building. “What I like about the cover is that I wanted it to be seen as me strolling through life,” Hucknall said.

Kicking off with the gentle flute intro of You Make Me Believe, Life extends an understated welcome, with Mick’s crooning accompanied by a swaggering R&B groove and swells of sensual horns. By the time the album rolls into So Many People, however, it’s clear that the album will be a confident and assured enterprise, swaying into a smooth soul ballad in order to seduce the listener. Highlighting Hucknall’s peerless singing voice, it beguiles listeners with pleasant songcraft while flaunting a clean, laidback production sensibility rooted in Simply Red’s tried-and-true pop-soul formula. Lives And Loves keeps the pace, moving gently into the realm of easy-listening bliss.

“Quite a few songs have survived, that’s what I like about ‘Life’”

Immediately going straight to No.1 in the UK, Life rarely departs from its chilled-out feel, but all the songs are distinct enough to stand on their own. There’s a hidden gem in the guise of So Beautiful, a soft and soulful ballad that Hucknall originally wanted to release as a single. The album’s biggest musical shift, however, comes with Hillside Avenue, a song that saw Hucknall once again explore his deep-rooted love of reggae as he collaborated with Jamaican duo Sly & Robbie.

Life’s next single, Remembering The First Time, was yet another catchy blend of gratifying R&B, mixing shades of whirling Dr Dre-style synths with acid-house-infused breakbeats. With Hucknall’s repetitive vocal hook, a wind-instrument arrangement gave the song an airy and midtempo presence on the UK singles chart, where it peaked at No.22 in December 1995.

For all of Hucknall’s initial ambitions to diversify and embrace new musical trends, his vocals still sit firmly at the forefront of Life, while his songwriting continued to underscore his commitment to mixing contemporary acid-jazz percussion with traditional soul and R&B flavours, as on Out On The Range, which rides a light 70s-funk rhythm. “Quite a few of the songs have survived,” Hucknall later said, reflecting on how he still enjoys playing much of the album at gigs. “That’s what I like about Life.”

In February 1996, Simply Red performed at the BRIT Awards. With his dreadlocks now shorn to shoulder length, Hucknall took to the stage in a red waistcoat, winding his hips in front of an army of backing dancers. That same month, Life’s third single, Never Never Love, continued the band’s commercial hot streak, peaking at No.18. A melding of contemporary swingbeat and classic soul music, its gentle funk guitar licks and easygoing organ-playing showed just how much Simply Red stood out amid the brash, lad-centric culture Britpop bands such as Oasis and Blur had ushered in.

“They wanted a solemn, anthemic piece which would calm people down”

1996 was a memorable year for British pop culture. That summer, England hosted the international football tournament Euro 96. Simply Red had been asked to write the competition’s official song, and the band were invited to play at its opening ceremony. “The organisers of Euro 96 gave me a brief that when we played in the stadium that day people should become more unified,” Hucknall said. “It was pretty fiery at that time, with some elements of hooliganism, and they wanted a solemn, anthemic piece which would calm people down.”

Released as a single on 7 June 1996, We’re In This Together was the final song to be lifted from Life, having originally appeared as the album’s closing track. “We’re In This Together is really not about football but about South Africa,” Hucknall explained. “When you look at the political situation, the song is very poignant.” Arguably the most rousing moment on Life, its veiled comment on post-apartheid politics is underscored by the appearance of South African trumpeter Hugh Masekela on flugelhorn and the Umoja Singers Chorale. An unassuming protest song, it peaked at No.11 in the UK and perfectly rounded off Life’s promotional run.

Life sold 3.7 million copies worldwide, and it remains fully deserving of its place as one of Simply Red’s best-selling albums. “It was our third No.1 album in a row,” Hucknall said, “but it would be tough for anyone to follow the success of Stars. I still think it’s a very good album.” With Life, the singer had once again proven how expertly he could imbue a traditional soul-based approach with more modern contemporary sounds. By giving fans a logical continuation of the Stars trajectory, Simply Red proved their staying power and continued to shine just as brightly as ever.