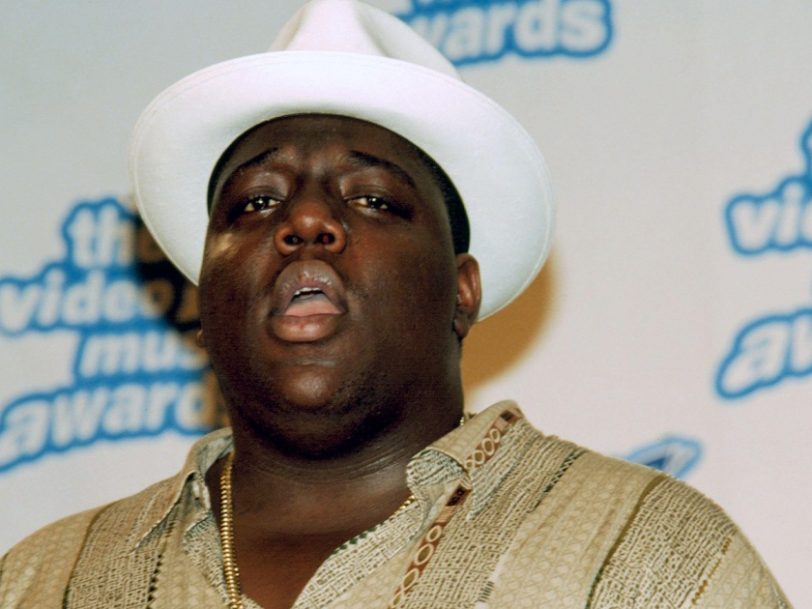 Released just weeks after The Notorious B.I.G.’s fatal shooting, ‘Life After Death’ was a hip-hop epic that ensured Biggie’s immortality.

The Notorious B.I.G.’s second album, the diamond-selling, Grammy-nominated double-disc Life After Death, was released by Sean Combs’ – aka Puff Daddy’s – Bad Boy Records imprint on 25 March 1997. The New York City-born rapper, also known as Biggie Smalls, had quickly risen to prominence since the release of his debut album, 1994’s Ready To Die, but had been fatally shot to death in a drive-by attack in Los Angeles, just weeks before Life After Death’s release. When the album hit the shelves, its title seem like grim foresight. Today, it stands as a testament to Biggie’s immortality as a hip-hop icon
.

Listen to ‘Life After Death’ here.

Following a brief intro, the two-hour epic kicks in with the forbidding Somebody’s Gotta Die (“Revenge I’m tastin’ at the tip of my lips/I can’t wait to feel my clip in his hips”) before rolling into the brash, ground-hugging, Grammy-nominated single Hypnotize (“At my arraignment, note for the plaintiff/Your daughter’s tied up in a Brooklyn basement”). The latter samples Herb Alpert’s hardy perennial Rise, and Pam Long, from Bad Boy’s female R&B group, Total, dealt with the chorus, derived from Doug E Fresh and Slick Rick’s 80s hip-hop classic La Di Da Di. It was accompanied by a ludicrously bombastic video, featuring helicopters, speedboats, motorbikes and open-top cars, flashing the wealth that Biggie and the Bad Boy stable had made in just a few short years.

The rap masterclass Kick In The Door was produced by DJ Premier from Gang Starr, a regular Biggie collaborator and one of hip-hop’s most respected producers. Its innovative I Put A Spell On You sample straight-legged the famous waltz, while Biggie continued on his rampage: “Conscious of your nonsense, in ’88/Sold more powder than Johnson & Johnson/Tote steel like Bronson.” The glistening Last Day was produced by another hip-hop heavyweight, Havoc from Mobb Deep, and features the menacing Bad Boy signees The LOX, whose line-up included Jadakiss and Styles P, setting Biggie up for a classic verse: “Realisin’ a fist fight would be asinine/You just pop wines, I must pop nines.”

The more aspirational I Love The Dough (“We hit-makers with acres/Roll shakers in Vegas, you can’t break us”) was touched by Biggie’s long-time producer Easy Mo Bee, who threw in an unlikely musical quote from Rod Stewart’s Da Ya Think I’m Sexy? One of the best Notorious B.I.G. songs, I Love The Dough features another plucky up-and-coming young rapper destined for greatness, Jay-Z. The contrastingly circling, deceptively languid What’s Beef? (“I done smoked with the best of ’em/Shot at the rest of ’em”) follows, with Sean Combs shadowing Biggie with some ad libs, before the skit B.I.G. Interlude briefly takes things back to the 80s by sampling proto-gangsta rapper Schoolly D’s classic P.S.K. What Does It Mean?, in a tip of the hat to Biggie’s history and mindset.

Another huge Life After Death single came in the form of the platinum-selling Mo Money Mo Problems. The smoothest-sounding Biggie cut to date, it was built on an infectious sample from Diana Ross’ Nile Rodgers– and Bernie Edwards-produced hit I’m Coming Out; with Combs’ latest protégé Mase, Combs himself and rising R&B singer Kelly Price taking up much of the space (“Who’s hot, who not?/Tell me who rock, who sell out in the stores?”, as Mase put it), its effervescence was impossible to ignore. Hip-hop legend Hype Williams stepped in to direct the video, lending it his signature glitzy style while giving rise to the question, had Biggie lived, might he have ended up alongside Nas and DMX in Williams’ cult 1998 feature, Belly?

Making a land grab for the West Coast

With crisp production from Buckwild (from the Diggin’ In The Crates Crew), the skittering, profane I Got A Story To Tell closes Life After Death’s first disc. Opening the second, the low-slung Notorious Thugs sees Biggie gamely matching zigzag rhymes with Cleveland’s mellifluous, fast-rapping Bone Thugs-N-Harmony, then fresh from the success of Crossroads. It’s followed by the reflective, piano-led Miss U (produced by Naughty By Nature’s KayGee and featuring R&B group 112), which concerns lost friends: “Gave him half my paper, told him, ‘Go that route!’/Few months, he got his brains blown out/Now I’m stressed.”

Things change pace with the dirty, pneumatic, electro-funk-influenced Another, featuring Biggie’s girlfriend Lil’ Kim, with Biggie himself channelling Biz Markie’s carefree singing style. Then comes the appropriately Zapp-esque G-funk of Going Back To Cali, another Easy Mo Bee piece, with Biggie making a land grab for the West Coast’s distinctive musical style, and claiming his qualified love for sun-drenched California. The atmospheric Ten Crack Commandments, though, was more resolutely New Yorkian. Another DJ Premier production, it saw Biggie revisiting his teenage trade: “Seven, this rule is so underrated/Keep your family and business completely separated.” The Delfonics-sampling Playa Hater is again in a completely different style. Reminiscent of one of Bootsy Collins’ make-out tracks, it comes complete with more Biz-esque singing but transfers the action to a stick-up.

The jiggy private-party vibes of album cut Nasty Boy re-emerged in 2005, when a remake, Nasty Girl, became an international hit after appearing on the posthumous release Duets: The Final Chapter, featuring guests Jagged Edge and Nelly. Meanwhile, released as Life After Death’s fourth and final single, the smooth Sky’s The Limit went gold straight off the bat. It was produced by Clark Kent and features 112, here cribbing from D-Train’s modern soul classic Keep On. Director Spike Jonze (Being John Malkovich, Beastie Boys Story) filmed the video, casting child lookalikes in the key roles.

As Life After Death enters the final stretch, My Downfall sees Biggie call upon Darryl “DMC” McDaniels, from NYC rap legends Run-DMC, and rap bleakly prophetic lyrics such as “You wanna see me locked up, shot up/Moms crouched up over the casket, screamin’ ‘Bastard!’” The equally strident, RZA-produced Long Kiss Goodnight was later reborn as Tonight, on another posthumous set, Born Again. The album’s closer, You’re Nobody (Til Somebody Kills You) (“Laugh now, cry later/I rhyme greater”), features Biggie’s wife, Faith Evans. This sentiment may be untrue, but Biggie’s tragic death undoubtedly drew interest from listeners beyond his typical audience.

Sampled endlessly since its release, Life After Death remains one of the most successful and influential hip-hop albums of all time. It smoothed off some of the raw power of Biggie’s first set, but his talent had not dimmed one iota (indeed, the rhyming schemes were getting more complex). Though a wintry air hung over much of the record – almost like a hip-hop answer to Martin Scorsese’s gangster classic GoodFellas – Biggie had expanded his book of collaborators. Had he lived to see the album’s monumental success, he would have continued to surpass any limits imposed upon him.