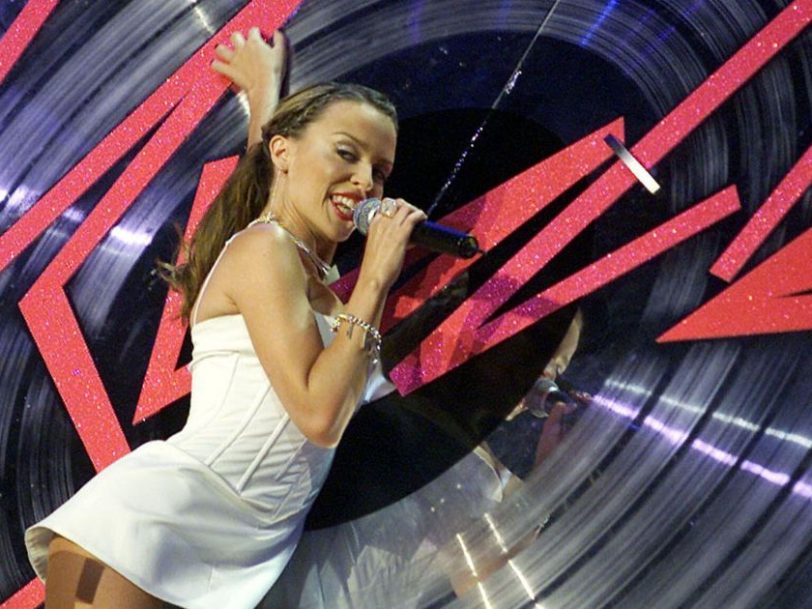 In Your Eyes: How Kylie Honed Her Perfect Pop Vision

How do you follow one of the biggest-selling singles of all time? Kylie Minogue had an ace up her sleeve with 2002’s In Your Eyes.

That the terrific electro-pop single In Your Eyes remains somewhat overlooked in Kylie Minogue’s extensive back-catalogue was, frankly, almost inevitable. Following a hit as colossal as Can’t Get You Out Of My Head would be a tall order for any act, and that In Your Eyes performed as well as it did (No.3 in the UK and No.1 in Kylie’s homeland) is testament to the momentum around the Australian star’s career at the turn of the new millennium.

The song: A sexy slab of Latin-infused house

Following her 2000 relaunch album, Light Years, Kylie was again able to take her pick of the pop songwriting talent. Turning to Richard “Biff” Stannard, Julian Gallagher and Ash Howes was an obvious move. The trio had hit-making form, crafting a string of smash singles for Five, while Stannard had worked with Kylie before – he co-wrote the 2000 single Please Stay – and would continue to collaborate with her across later projects, most notably on A Second To Midnight (her 2021 duet with Years & Years) and Shelby 68, from her country-tinged Golden album.

In Your Eyes is a sexy slab of Latin-infused house with a hypnotic pace that made it an out-of-the-park club favourite. In some ways, it is markedly less pop than its platinum-selling predecessor, and its range of remixes, including the excellent Saeed and Palash Main Mix, further positioned Kylie as unassailable pop royalty in the early 21st century.

The release: Success was a given at this point

In Your Eyes was issued in Australia on 21 January 2002, but in the era of CD and cassette singles the ongoing success of Can’t Get You Out Of My Head led to a delay in the song’s release in the UK, pushing the store date back to 18 February to coincide with Kylie’s appearance at the BRIT Awards, where she was nominated for no less than four awards – winning two, for Best International Female and Best International Album.

The video to promote the single built on the sci-fi narrative of Kylie’s previous groundbreaking clip, with director Dawn Shadforth once again behind the camera. The studio sequence features Kylie performing with a group of dancers and received heavy rotation on MTV, and was later issued as a commercial DVD single down under.

UK and Australian success was a given at this point in Kylie’s resurgent career, but the US remained a fickle market for the pop princess, and In Your Eyes was passed over in favour of Love At First Sight. Stateside, then, Kylie would endure as a cult act with a sizeable dance following, and the tale of how Kylie’s became an LGBTQ+ icon begins here.

The legacy: Proof that Kylie was no fluke hitmaker

Kylie first performed In Your Eyes live on a UK TV special called An Audience With Kylie Minogue, broadcast in October 2001 (as Can’t Get You Out Of My Head topped the British singles chart), and the song would later feature in the Sex In Venice segment of 2002’s KylieFever2002 tour that ran across the summer. Future concerts would revisit the hit, with notable outings on her 15th season of live dates, Golden Tour, which ran across 2018 and 2019.

Perhaps the greatest legacy that In Your Eyes gifted Kylie’s career at this critical juncture was to conclusively prove that Can’t Get You Out Of My Head was no fluke. Careers as long as Kylie’s will inevitably ebb and flow, but In Your Eyes remains an accomplished example of smart turn-of-the-century pop. Pre-streaming, its phenomenal 17 weeks on the UK singles chart shows this was no flash-in-the-pan follow-up that was selling to a hardcore fanbase alone. In Your Eyes would be a highlight of many artists’ careers; that it now sometimes gets overlooked is simply a testament to just how many fabulous hit singles she has had.

Find out where ‘Light Years’ ranks among our best Kylie Minogue albums.