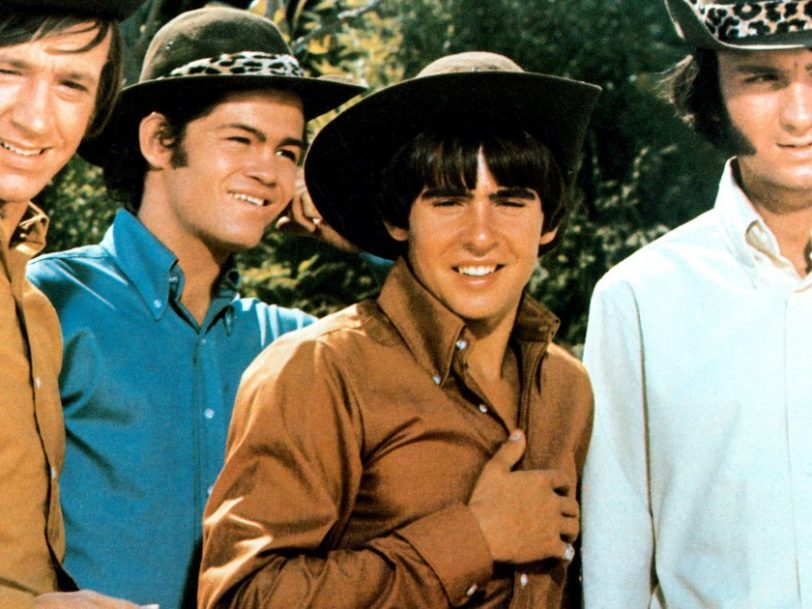 Seeing through fame’s facade and demanding to be themselves, The Monkees created perfect 60s pop that was more subversive than you think…

Down the decades, a weird myth about The Monkees has taken root until it has become reality. This is not unusual in rock’n’roll: Ringo wasn’t much of a drummer; Motown didn’t want to release What’s Going On… that kind of tale. You think the biggest band of their era would carry an inadequate drummer? Motown didn’t release quite a lot of Marvin Gaye’s material; would it issue an album by him that they thought sucked? The Monkees have a similar mythology: formed to front their namesake TV show, their early – often chart-topping – hits were trivial pop cuts that didn’t allow the group to express themselves as a creative entity until the release of their gleefully psychedelic 1968 film and its accompanying album, Head.

Listen to the best of The Monkees here.

There’s nothing wrong with Head. If you want to witness pop’s bubble being punctured by people who have had enough of conforming to rules they never made, alight here. It’s easy to love this innovative movie, and its accompanying album boasts intriguing, well-crafted songs that destroy all expectations. Head is not an aberration, however. It sums up what The Monkees always did: deliver brilliant, funny, rebellious youth culture.

The Monkees made artistic, expressive and creative music

Head has its own myth: The Monkees believed they were sticking it to The Man by making the movie and album; but The Man released both. Why? Because The Man secretly thought Head must be cool: if that’s what the kids wanted, The Man would sell it. But the records The Monkees made before Head were artistic, expressive, savage and sarcastic – if they weren’t, Head would not have mattered. It did matter, however, because The Monkees were an important band who’d sold millions of fabulous records. If they’d been nobodies, Head would have been a psychedelic miracle that bombed, like so many other one-offs made by pop’s forgotten also-rans.

The Monkees were not alone in seeking artistic fulfilment in the psychedelic era, despite having already made some of the greatest pop of their generation. Think of The Four Seasons’ The Genuine Imitation Life Gazette or Bee Gees’ Odessa – literally fantastic records, but not works those bands are remembered for; these experiments were not repeated. Pop groups who begged “to be taken seriously as musicians” were common. But in many cases, bands’ “straight” records were better, had just as powerful a message to impart, and communicated more directly than their freaky work. In this generation, in this loving time…

The Monkees’ earlier pop songs should be taken more seriously. The likes of Daydream Believer and I’m A Believer speak for themselves: this was the work of a class act. If The Beatles had released Last Train To Clarksville, fans would have considered it business as usual. A Little Bit Me, A Little Bit You and Valleri are perfect 60s pop. But “The Monkees ain’t real” was an idea that appealed to the fans and makers of “serious” music. It still taints how the group is assessed.

But who is “real”, exactly? All bands are “produced”. Most work with a producer who knows how to make a record when the groups may not. Records are a collaborative endeavour, not auteurship. Wasn’t George Martin “the fifth Beatle”? The Byrds, whose brilliant So You Want To Be A Rock’n’Roll Star skewered the cynicism of manufactured bands, would have struggled without producers Terry Melcher or Gary Usher or, initially, Bob Dylan’s songs. OK, it’s different to being a group assembled for a TV show, but the success of every music act depends on outsiders: an art department, an A&R person, engineers, marketing execs, cosmetic orthodontist… No band is an island.

The Monkees were brilliant songwriters

Whisper it quietly: The Monkees were brilliant writers, not just superb singers, actors and increasingly talented musicians. An early hint was Mike Nesmith’s Papa Gene’s Blues, on The Monkees, their 1966 debut album. Despite jokey jug-band clattering, it stands up as an early example of country-rock. (And try Pisces, Aquarius, Capricorn & Jones Ltd’s What Am I Doing Hangin’ Round? – not self-composed, but one of the greatest country-rock tracks of the 60s: Nesmith was a pioneer.)

1967’s More Of The Monkees contains one of the best US pop tracks of the year in Nesmith’s Mary Mary. The Monkees wrote half their third album, Headquarters. But whether or not they wrote all their songs isn’t vitally important. If The Monkees weren’t writing material as strong as the songs they sang by Tommy Boyce and Bobby Hart, Neil Diamond or Carole King and Gerry Goffin, that’s OK. Who could? They were still expressing the heartfelt feelings of their generation. And those writers, despite their merits as performers, could not express those feelings to the pop kids like The Monkees could.

The Monkees were rebellious critics of hypocrisy

Those feelings were often about love – vitally important to the young, and more crucial than ever in the counterculture of 1966-’67. But The Monkees’ records were also critiques of society’s trivial values. Pleasant Valley Sunday went to No.3 in the US while taking a swipe at middle-class America, celebrating and lampooning it, even mentioning the local garage band (which probably included members who’d have resented The Monkees’ “manufactured” status). Headquarters’ Mr Webster ranks with The Kinks’ Mr Pleasant and Simon & Garfunkel’s Richard Cory in tackling a mid-60s speciality: respectability equals hypocrisy. Even Your Auntie Grizelda, from More Of The Monkees, sneers at the family moralist while casting Peter Tork as the band’s comedic Ringo figure.

Simian rebelliousness peppered The Monkees’ work. Alternate Title (aka Randy Scouse Git) dismantles the pop royalty lifestyle, finding only chaos within, referring to The Beatles as the “Four Kings of EMI”, noting the double standard of enjoying debauchery while being regally waited on, and pondering the value of easily made relationships. It also touches on another favourite 60s’ theme: boys growing their hair. Musically, the song melds vaudeville and the hardest, noisiest pop. The contrast between the two still shocks.

The sense of mess, anger and frustration Alternate Title evokes is every bit as powerful as, say, The Yardbirds’ Happenings Ten Years’ Time Ago, but The Monkees’ song was a bigger hit, in the UK at least; The Monkees’ US label, Colgems, declined to release it as a single, concerned it might mar the band’s image. Tellingly – with its subversively witty alternate title being chosen after Randy Scouse Git was deemed too offensive for UK audiences – this monstrous slab of madness was The Monkees’ first self-penned single, and the first Micky Dolenz song they recorded. Oh, and the group played on Alternate Title. But “they didn’t play on their records” is a pointless slight: did anybody mind that The Temptations weren’t playing on their classic records, or that Eric Clapton handled lead guitar on George Harrison’s Why My Guitar Gently Weeps?

The Monkees were plugged into the counterculture

Alternate Title was not the only example of the pre-Head Monkees pushing pop’s crumpled envelope. B-sides of their early singles were experimental. August 1966’s stop-start Take A Giant Step is perfect baroque mid-60s pop, presaging 1967’s psych explosion. The flip of I’m A Believer was way rougher: The Monkees get greasy in the garage on (I’m Not Your) Steppin’ Stone, a Boyce-Hart tune dripping in cred, whether it’s Paul Revere & The Raiders or Sex Pistols sneering their way through it. The Monkees’ version is every bit as juicy, revelling in this fierce takedown.

And there’s Words, dark menace seeping from every note. If Words had been made by Arthur Lee’s Love, it might have been hailed as a work of genius. Placing it on the flip on Pleasant Valley Sunday in 1967 was remarkable: a cynical observation of respectable society on one side, a brooding refutation of love that hints at psychosis and gaslighting on the other. The Monkees were plugged into the rock counterculture and channelling it to the pop kids. That’s like putting whole chillis in baby food.

The counterculture was plugged into The Monkees

It was mutual: the counterculture was plugged into The Monkees. Lionised figures such as Frank Zappa and Tim Buckley appeared on their show. Mike Nesmith asked Zappa to appear; he agreed if he could “play your part”, so they swapped identities, like a jokey version of Mick Jagger and James Fox in Performance, but The Monkees did it first. Zappa also appeared in Head. Tim Buckley guested in the final episode of The Monkees’ TV show, delivering Song To The Siren. Sure, it gave these artists rare exposure. But if they believed The Monkees were cheesy, would they have done it? According to Nesmith, Zappa enjoyed their records, recognising their craft. Chip Douglas played on Monkees’ sessions and produced songs for them. Douglas was in The Turtles, whose Flo & Eddie joined Zappa’s Mothers. These were not passing ships: The Monkees were entwined with the coolest rock of their era.

Tork and Nesmith had been trying to find their metier on the LA folk scene before they joined the show that brought them fame. A friend of Mama Cass, Tork jammed with Roger McGuinn of The Byrds. Tork had been encouraged to audition for The Monkees by Stephen Stills, his buddy and fellow-scuffler on New York City’s Greenwich Village folk circuit in the early 60s. That period cemented The Monkees’ connection with Jimi Hendrix, who supported the group on their 1967 US tour. Davy Jones recalled seeing Hendrix depping with a band in the Village, his brilliance unappreciated by a sparse audience, and Micky Dolenz thought of The Jimi Hendrix Experience when The Monkees needed a support act and the guitar genius was barely known stateside.

The Monkees were as cool as their contemporaries, even if they were in a different situation. But in the end, their connections don’t matter. They deserve respect because they made some of the greatest records of the 60s. They weren’t just following pop’s path to cerebral weirdness, they were part of it: listen to Tapioca Tundra, which is as experimental as The Beatles’ Revolution No.9, and Mike Nesmith’s surreal Writing Wrongs.

It’s all very The Truman Show: The Monkees saw through the facade and demanded to be themselves, burning the blueprint that created them. But the process did not begin with Head: they were flinging mad stuff at bubblegum kids from the outset, placing a rebellious message within some of the greatest pop music ever made. Imagine Zappa with millions of juvenile fans, or a platinum-selling Residents: both mocked the rituals and mores of rock’n’roll even as they were making it. The Monkees delivered that mode of thinking to legions of young teenagers. If that’s not a subversive rock’n’roll act, what is?