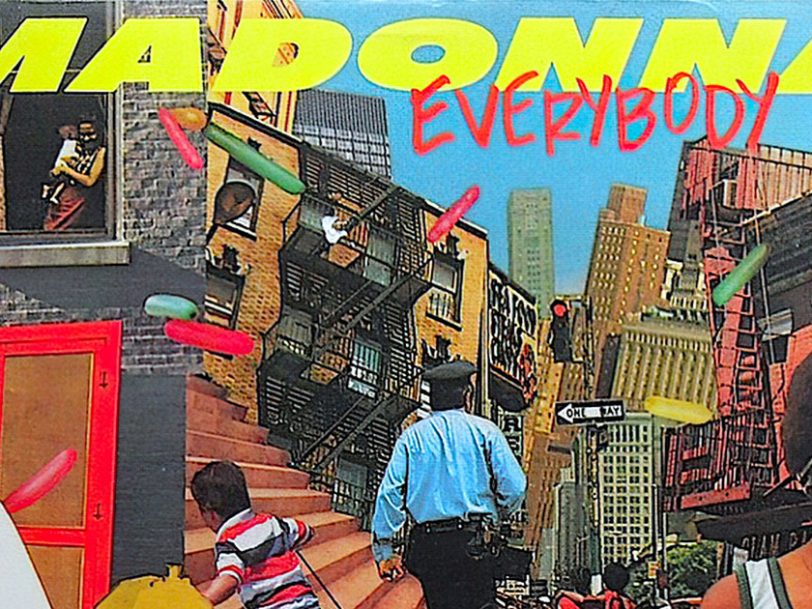 Everybody: The Story Behind Madonna’s Universally Great Debut Song

Madonna’s debut single, Everybody, still packs dancefloors. ‘I remember the feeling when I heard it on the radio,’ says ‘The Queen Of Pop’.

It was the humblest of beginnings. The first Madonna song ever to see release, Everybody had a modest promotional budget, the most basic of music videos (in an era when the promo clip was fast becoming essential) and a central marketing dilemma about how to pitch Sire Records’ new signing. At a time when US radio remained resiliently regimented into genre siloes, a dance track from an unknown white artist proved a challenge to convention. However, issued as Madonna’s debut single, on 6 October 1982, Everybody was merely the beginning of a genre-hopping career that would see the “Queen Of Pop” reign supreme for four decades.

Ironically, given how Madonna’s album covers would become a crucial part of the way she presented each bold creative shift, the Everybody’s sleeve designer, Lou Beach, left the future pop icon off the single cover in favour of creating a montage of street scenes. Adding to the unintentional mystique, Billboard notoriously referred to Madonna as a “young New York duo produced by DJ Mark Kamins”. But the song would survive on its musical merits alone, and, following its release, Everybody soon began to gain momentum.

A fan favourite song with millions of streams

One of the most significant songs of Madonna’s career, Everybody started life as demo written by the singer and produced by Stephen Bray, who would go on to pen many of the best Madonna songs of the 80s, including Into The Groove and Express Yourself. Madonna persuaded Kamins, who was a DJ at the New York City nightclub Danceteria, to play the track one night, and the crowd’s reaction was instant: they loved it. Kamins would take the rough recording to Michael Rosenblatt at Warner Bros, who made sure Sire Records supremo Seymour Stein heard it, too. When Stein met Madonna, he sensed something special and signed her to a two-single deal. Everybody was an obvious choice for the first release (another song, Burning Up – which, along with Everybody, would feature on Madonna’s self-titled debut album – became the second).

Recording Everybody again, with Kamins this time on production duties, wasn’t the easiest of collaborations for Madonna – it was the first time the DJ had secured that type of commission – but what emerged in the first week of October 1982 swiftly established itself as a breakout club hit. Principally issued as a 12” in the US, the song rose steadily to peak at No.3 on the stateside dance charts, while 7” singles were released in some European markets.

That December, a promo video was filmed at New York’s Paradise Garage, with Madonna performing onstage with backing dancers Erika Belle and Bags Rilez. Videographer Ed Steinberg, hired to shoot the clip, later recalled an early example of Madonna’s incredible work ethic. “One of her dancers was a no-show for the shoot,” he says. “That meant she had to totally reblock her on-stage routine. Without missing a beat, she had Erika and Bags restaged with precision and the show went on.” The clip got limited MTV airtime and wasn’t even included on Madonna’s first video EP, released as her career went into the stratosphere in 1984, and it remains one of her few promos never released commercially on a collection. Primarily used as a marketing tool in the dance clubs that played clips, it remains a fan favourite that has now enjoyed millions of streams online.

Madonna performed Everybody at the many club appearances she made as she was trying to establish herself, and later included the song in the setlist of her first full-scale tour, 1985’s The Virgin Tour, which never made it beyond the US. (International audiences had to wait until 1993’s The Girlie Show to see her perform it live.)

Everybody later made a few appearances in the promotional sets Madonna performed for 2005’s Confessions On A Dance Floor album, including during a gig at London’s Koko, where things came full circle: Madonna had played there in 1983, and Everybody was included on that short playback set, months ahead of her chart breakthrough with the song Holiday. In the UK, label bosses sensed Everybody could be a hit, and had Visage collaborator Rusty Egan, an influential DJ on the New Romantics scene[https://www.thisisdig.com/feature/new-romantics-history-cultural-legacy/], remix the track for the British market. His cut removed much of the bass and amplified the synth lines, and is now one of Madonna’s rarer remixes.

In 2022, Madonna included a different remix on her hit collection Finally Enough Love: 50 Number Ones, which celebrates an incredible run of Madonna No.1 singles on the Billboard dance chart; Everybody makes an appearance courtesy of a version from her 1987 remix album, You Can Dance.

There would be bigger hits to come, but, as a crucial part of Madonna’s breakthrough, Everybody has built its profile and reputation steadily over the 40 years since its release. The charismatic delivery of this classic dance song may have left her label uncertain how to showcase their new signing, but they need not have worried… Madonna’s star power needed little assistance.