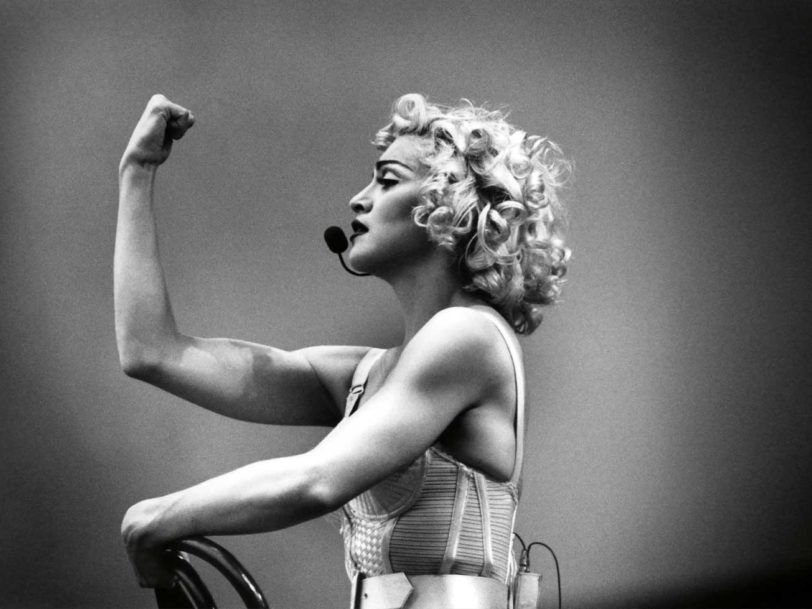 Dig out your leotards and locate your giant boomboxes. Madonna’s ‘Confessions On A Dance Floor’ album is a nonstop party from start to finish.

A mere two years separated 2003’s American Life and Madonna’s tenth studio album, Confessions On A Dance Floor, but a lot had changed in that time. If the former tackled consumerism and the American Dream, rumours began to circulate, in early October 2005, that the lead single from its follow-up would be inspired by ABBA. When Hung Up appeared, on 17 October, sampling the Swedish pop legends’ Gimme! Gimme! Gimme! (A Man After Midnight), it felt like a smart mash-up, not just a sample.

Instantly recognisable and iconic, Hung Up was one of Madonna’s most radio- and club-friendly songs to date, leaving fans wondering if it could, in fact, be her strongest single since Ray Of Light – or even Like A Virgin. The song rocketed to the top of the charts in 41 countries, and its music video is currently edging towards 300 million views on YouTube. Returning Madonna back to the best in her field, Hung Up was a blueprint for the album that followed.

A return to her pop roots

Released in Germany on 11 November 2005, and then rolling out around the world, Confessions On A Dance Floor still sounds as exhilarating as it did on its first listen. A continuous mix of disco classics, it saw Madonna hold fans firmly in her grasp as she returned to her pop roots. The album’s second track, Get Together, opens with the ringing of an alarm clock and features samples of Stardust’s Music Sounds Better With You and Chaka Khan’s Fate, while also acknowledging The SOS Band’s hit, Take Your Time (Do It Right) with the lyrics “Baby we can do it/We can do it all right”; the explosive middle eight is superb, making the song one of the greatest club anthems of the past few decades, destined to make listeners feel alive. Released as Confessions On A Dance Floor’s third single, it reached the Top 10 in multiple countries, including the UK, Australia, Canada and Italy, and hit No.1 in Spain.

The disco influences continue with Confessions On A Dance Floor’s third track, Sorry, which features a bassline reminiscent of Jackson 5. One of the first songs to be written and recorded for the album, it was released hot on the heels of Hung Up and shifted Madonna’s focus to self-love and empowerment, with lyrics such as “I can take care of myself” reinforcing that message (ever since its release, fans have been shouting the words in eight different languages: French, Spanish, Dutch, Italian, Hebrew, Hindi, Polish and Japanese). Sorry received positive reviews across the board, with many declaring it to be the album’s strongest song.

Confessions On A Dance Floor’s first three songs had seen Madonna work alongside producer Stuart Price, but Future Lovers saw her return to Mirwais Ahmadzaï, co-producer on 2000’s Music and American Life. A nostalgic disco throwback, the song references Donna Summer’s classic I Feel Love and sees Madonna advise her listeners not to dwell on past experiences, recommending them to move on and move forward.

I Love New York, meanwhile, sees her momentarily shift from disco-pop to pop-rock. It was perhaps inevitable that Madonna would eventually write a track about life in New York – the city where she found fame over 20 years earlier – and with Confessions On A Dance Floor being so much about her roots, now was the perfect time. Rhyming “New York” with “dork”, meanwhile, put a smile on many listeners’ faces, bringing the characteristic sass that fans adore the most. Placed midway through the album, the song acts as a break from act one, before plunging listeners into more hard-hitting bangers.

This is where Let It Will Be comes in. Opening with an orchestra, the song may lull first-time listeners into thinking it’s time for a short breath – to chill. They’d be mistaken. The song bursts into life, continuously building in energy as Madonna takes you on a nostalgic journey back to “where it all started”. A personal number, it finds her telling listeners that she could enlighten them “about success, about fame”, and would have been great single material.

Jump was the fourth, and final, single to be released from Confessions On A Dance Floor, and it’s here that the album really intensifies, with the kind of bass and groove at which Madonna truly excels. Along with Get Together, Jump became a club anthem, full of life and energy, with critics championing its empowering standpoint. Reinforcing Sorry’s message, lyrics about self-sufficiency and independence make Jump an emotive club classic.

Confessions On A Dance Floor’s closing track, Like It Or Not, is a bold declaration of independence, and is easily the most melancholy song on the album. After all the dancing that preceded it, Like It Or Not sits high as a fan favourite. Having discussed fame, success, her journey and life as a celebrity throughout the album, the song sees Madonna conclude with a powerful, “You can/Love me or leave me/’Cause I’m never gonna stop.”

A personal album set against the backdrop of a disco hall, Confessions On A Dance Floor is an album about love and wealth, the rise to fame. Met with critical approval, it topped the charts around the world and remains one of the most influential albums of the early 2000s, with albums such as Dua Lipa’s Future Nostalgia picking up from where it left off.

Imagine being ten albums into your career and remaining as iconic as Madonna. A unique, personal classic, Confessions On A Dance Floor reveals why she remains such a trendsetter.

Listen to the best of Madonna on Spotify.