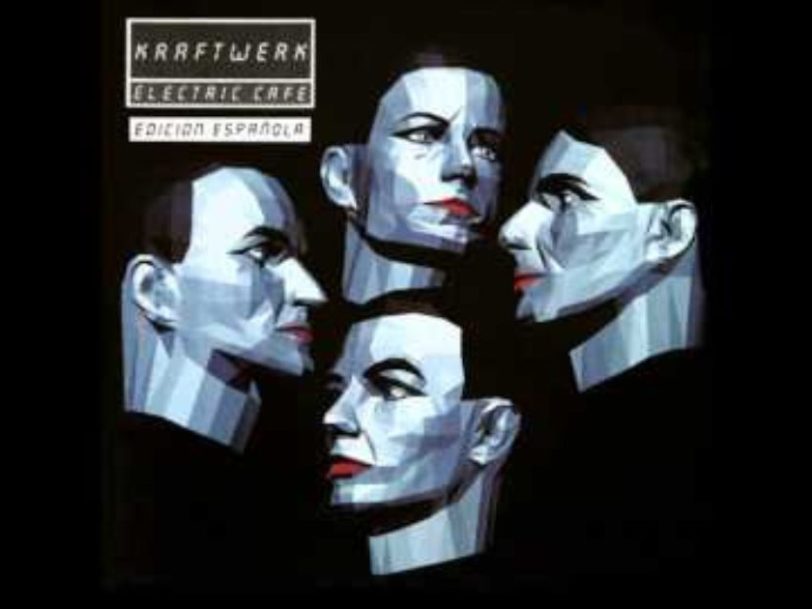 With their position as electro-pop godfathers beyond doubt, Kraftwerk’s ‘Electric Café’ album saw the group respond to the rise of dance music.

The 80s marked a period of change for electronic-music pioneers Kraftwerk. In a decade where the use of synthesisers was exploding in popularity, and dance music subgenres such as techno and house were springing up in Detroit and Chicago, Kraftwerk’s influential legacy could be heard in each new musical innovation. Having taken their longest gap yet between albums, the German four-piece, Ralf Hütter, Florian Schneider, Wolfgang Flür and Karl Bartos, returned in the autumn of 1986 with Electric Café, and album whose working title, “Techno Pop”, proved that, despite a five-year absence, the group understood exactly where electronic music was in the middle of the decade.

Though they took their time in the face of these musical developments, Kraftwerk hadn’t lost their innovative streak: part of the reason for the delay was due to the band’s decision to re-tool their Kling Klang studio, in Düsseldorf, stripping away analogue equipment in favour of installing digital recording technology. Plus, with a new promo video that pioneered the use of all-new computer-generated graphics, Kraftwerk were keen to prove they were just as game-changing as ever.

Tasked with adapting the famous robotic avatars from Kraftwerk’s The Man-Machine era into CGI for the music video for Electric Café’s lead single, Musique Non Stop, film director Rebecca Allen was at the cutting edge of a field still in its infancy. “Kraftwerk came to me because I was specifically working on human motion, simulation and facial animation,” Allen later recalled. “This was great in the early days, because nobody was doing anything like that.” Then working in the Computer Graphics Laboratory at the New York Institute Of Technology, Allen was part of the team behind Max Headroom, a computer-generated news presenter who would become a regular fixture on MTV.

Thanks to Allen’s creative direction, Musique Non Stop set Kraftwerk up for MTV dominance with a visually spectacular promotional video. One of the best 80s music videos, the clip was every bit as revolutionary as the stop-motion razzle dazzle that characterised Peter Gabriel’s Sledgehammer, and it re-envisioned Kraftwerk as computerised doppelgängers, fully launching them into the digital era. “That Kraftwerk video clip shaped the MTV era,” said Ralf Dörper, keyboardist for German group Propaganda, “and it became the anthem of the music channel.”

With Music Non Stop on heavy rotation on the famous cable music channel, its parent album, Electric Café, followed on 10 November 1986, featuring Rebecca Allen’s CGI depictions of the band on its cover. Having been delayed firstly by a cycling accident suffered by Ralf Hütter a few years beforehand, and secondly by being completely re-recorded on digital equipment, the album surprised many with its lack of a conceptual backbone the likes of which had characterised much of Kraftwerk’s previous work. Arguably their most minimalist and stripped-back release to date, Electric Café favoured an icy, clinical atmosphere and a harsher dance-pop sound than before, with production help from New York house DJs Francois Kerkovian and Ron Saint Germain. It had been a long time coming, but Kraftwerk were officially coming in from the cold.

Upon its release, Electric Café ensured Kraftwerk were keeping pace with the newer bands they had influenced, among them Orchestral Manoeuvres In The Dark and The Human League. In addition, it also anticipated the more groove-oriented, less melody-driven direction path dance music would later take. And what it may have lacked in a core concept is more than made up for in its atmospheric collection of stark metallic beats and sprawling techno-pop.

From the way the album’s playful opener, Boing Boom Tschak, tinkers with jarring sound effects to how presciently the song Techno Pop foreshadows the ubiquity of electronic music (“Synthetic electronic sounds/Industrial rhythms all around/Music non-stop/Techno pop”), it was clear Kraftwerk hadn’t completely abandoned their pop sensibilities, either. Electronic Café’s second single, The Telephone Call, is a Moog-laden synth-pop ditty exploring emotional disconnection from a loved one, built largely around a “number unobtainable” tone. It also marked the first time Karl Bartos had ever sung on a Kraftwerk track. “I thought it would be good to have someone else singing for a change,” the percussionist later said.

Unlike some of the other tracks on Electric Café, The Telephone Call is anchored by a clear conceptual theme, both lyrically and musically. “We took the sound of the telephone bell and made music around it,” Bartos explained. “It is still a typically Kraftwerk piece with its mixture of funky rhythm, musique concrète and pop music.” With a black-and-white music video influenced by the German expressionist filmmaker Fritz Lang, The Telephone Call stands among the best Kraftwerk songs and is a fine example of how the group’s aesthetic carried across to the hyper-visual MTV age.

“There is a lot of functional music, like in the shops, in the planes, today it has become a sort of Valium”

Rounding off the album was the orchestral synth-pop tune Sex Object, simmering with electronic string arrangements and artificial slap-bass, and the multi-lingual title track, Electric Café, which features Kraftwerk’s iconic mix of vocodered vocals and synthy arpeggios. Though there is no overarching concept to Electric Café, the album had sprung from a Ralf Hütter idea: to attempt to build an electronic album using sounds from a café, possibly in an effort to point out how, in the years since Kraftwerk had built their electronic odes to modernity, in the shape of the albums Autobahn, Trans-Europe Express, The Man-Machine and Radio-Activity, electronic music had pervaded everyday life. “Now there is a lot of functional music, like in the shops, in the planes,” Hütter observed. “Today it has become a sort of Valium.”

By the time Electric Café was released, however, that idea had percolated for so long that the music had taken on a completely different flavour (the would be reissued in 2009, under it’s original working title of Techno Pop – a clearer indication of the music within). And yet it remains richly rewarding. For one thing, it seemed to recognise that mid-80s house music wasn’t so much about songs as it was about groove and atmosphere, so in this respect the album was just as progressive and forward-thinking as anything else Kraftwerk had recorded. Then there’s the fact it was the first album the band released on CD, recorded utilising digital technology – a seminal development for the group.

Metallic and often abrasive, Electric Café also marks an ending: both Wolfgang Flür and Karl Bartos left after the album’s release, making it the last hurrah for the classic Kraftwerk line-up. But in reflecting innovations unfolding in 80s dance music, and pointing the way to how the genre would continue to evolve, Electric Café ensured there was a future for the German visionaries.