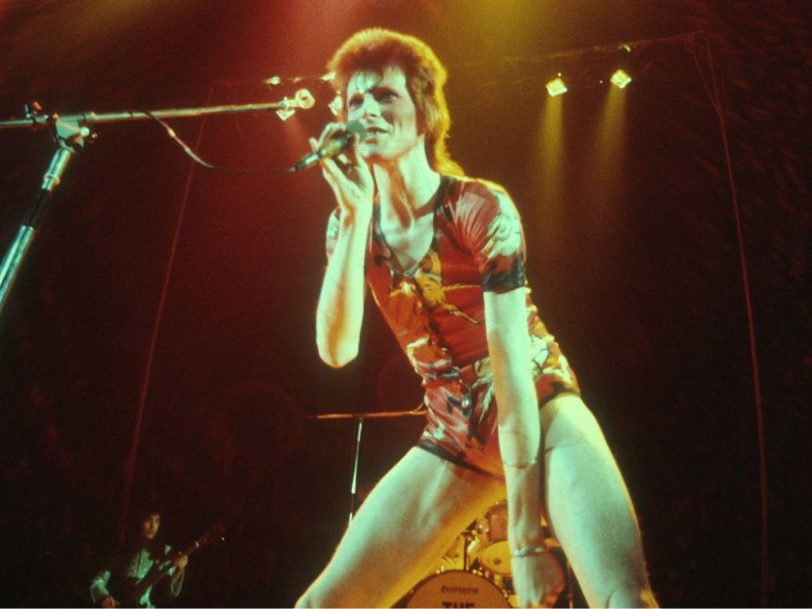 Just six months after the June 1972 release of his The Rise And Fall Of Ziggy Stardust And The Spiders From Mars album, David Bowie had became an interstellar icon. After staging their first US tour from September through to early December, Bowie and his band, The Spiders From Mars, returned to the UK as the road-hardened unit they’d promised to become. With early flushes of fame building into a tidal wave of Ziggymania, he booked a special homecoming gig for 24 December 1972 – Christmas Eve, no less – at London’s Rainbow Theatre, with a view to gifting fans his hardest-hitting live performance yet.

Listen to the best of David Bowie here.

Bowie had first unveiled his Ziggy Stardust alter ego at Friars Aylesbury, on the outskirts of London, in January 1972, before playing extensively through England, with shows in Scotland and Wales, for much of the year, in what would grow to become an 18-month world tour lasting through to July 1973. It was in the US, however, that Bowie and The Spiders began to perfect their live show, one which balanced high-octane rock with boundary-pushing theatrics. Having enlisted pianist Mike Garson ahead of The Spiders’ debut US show, at Cleveland Music Hall, on 22 September, by the time Bowie made it over to the West Coast, just under a month later, the group were performing the shows of their lives.

Broadcast on the Los Angeles-based radio station KMET FM, and given official release years later as Live Santa Monica ’72, Bowie’s 20 October show at Santa Monica Civic Auditorium, in Santa Monica, California, presented the new-look Spiders in all their glory. Slaying the audience with lithe versions of Ziggy Stardust songs (Moonage Daydream, Suffragette City) and taking an animalistic prowl through his then unreleased new single, The Jean Genie, Bowie proved that he was fast becoming the rock’n’roll messiah the 70s had been waiting for.

“That American tour has really honed the Spiders to perfection”

By the time Bowie returned to the UK in December, reports from journalists who had tracked his progress through the US had worked British fans into a frenzy of anticipation. His record label, RCA, welcomed him with hype-building “Bowie’s Back!” ads in the music press, and Bowie himself issued a seasonal greeting via the announcement of a Christmas show at London’s Rainbow Theatre, to be held on Sunday, 24 December 1972: “DAVID BOWIE and the Spiders wish everyone a HAPPY CHRISTMAS”. A standing ticket to Bowie’s previous two Rainbow shows that August had cost a mere 75p; now the asking price was £2.50. But that didn’t deter fans. The gig sold out almost instantly, with demand leading Bowie to try, in vain, to book another Rainbow show for 23 December.

Mike Garson’s UK debut wasn’t the only thrill in store that night. Kicking off a short run of UK gigs that would last into early January 1973, Bowie upped the wham-bam-thank-you-ma’am ethos of the Ziggy live experience by dropping the acoustic portion of his setlist in order to deliver a taut hour of lean, muscular rock. “Just to make this tour a little different we opened our shows with a frantic version of the Stones classic Let’s Spend The Night Together,” Bowie recalled in the book Moonage Daydream, a collection of photos by Mick Rock, who documented much of Bowie’s Ziggy Stardust era.

Right from that opening number (soon to be recorded by Bowie for his Aladdin Sane album), Bowie ripped through a raucous set that also included what the NME’s Charles Shaar Murray would call “a razor-edged version of Hang On To Yourself, played better than I’ve ever heard it”, along with “powerful as they come” takes on Ziggy Stardust; The Man Who Sold The World’s opening track, The Width Of A Circle; and the banned-in-the-USA single John, I’m Only Dancing, right through to the closing notes of Rock’n’Roll Suicide.

“That American tour has really honed the Spiders to perfection,” Murray affirmed. “The show is tougher, flashier and more manic than it’s ever been before.” Noting the audience’s near-hysterical reaction, he wrote, “Just for the record, they’ve started screaming at David Bowie… No more silent reverence – gold ol’ screaming, grabbing, fainting, sobbing and knicker-wetting… One hell of a way to see Christmas in.”

With Bowie on the verge of entering his Aladdin Sane era, and soon to question who was really in control – Bowie himself or his extraterrestrial creation – Murray also made the slightly prophetic observation: “Whether it’s Bowiemania or Ziggymania or a combination of the two is not yet apparent, but something is definitely happening, Mr Jones.”

“This was probably one of the best, highest energy jaunts of our short 18-month life”

For his part, Bowie had one request for fans: “I asked the audience beforehand to bring a toy to be donated to Dr Barnardo’s Children’s Home, the organisation for which my dad had worked all of his life,” he later recalled, adding, with palpable pride, “I think we filled an entire truck with them.”

Returning home to Haddon Hall that night, Bowie reportedly found another delivery awaiting him: six Royal Mail sacks, each full of Christmas cards. And there was more adulation in store. In their Christmas issue, Melody Maker magazine named him both Top Vocalist of the year and their “main man of 1972”, with The Rise And Fall Of Ziggy Stardust And The Spiders From Mars coming away as the critics’ album of the year.

At the end of a whirlwind 12 months in which he’d rocketed to superstardom, Bowie touched down on Earth a happy man. More US dates were booked for February, with Japan following in the spring. But this brief period at home remained, in Bowie’s estimation, a highlight of the Ziggy Stardust shows. “We put in a short tour of the UK between December and January 1972-73,” he reflected, 30 years later. “It was always a great buzz to come back home and this was probably one of the best, highest energy jaunts of our short 18-month life.”