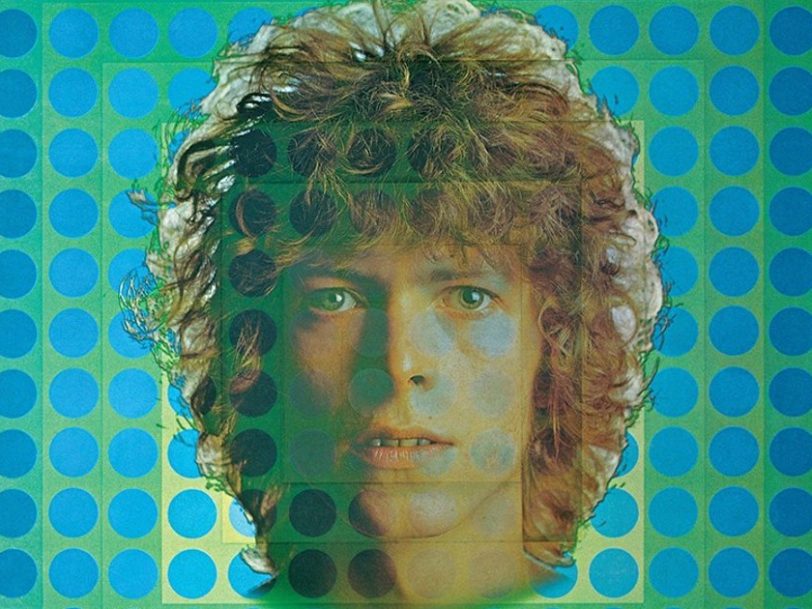 Bold and diverse, David Bowie’s self-titled 1969 album boasted songs such as Space Oddity which saw him emerge as a unique songwriter.

Famously, 1969 was the year when man first walked on the moon, but it was also the year in which David Bowie made his own giant leap when his breakthrough hit, Space Oddity, landed him in the Top 5. Yet, the celebrations were muted, for while Bowie’s second, self-titled 1969 album appeared just weeks later, it missed the charts the first time around and – like Bowie himself – had to wait another three years before enjoying its well-deserved season in the sun.

“He wasn’t sure of what he could do”

Nonetheless, 1969 was the year when Bowie’s countdown to fame and fortune commenced apace – and it’s all the more remarkable when you consider that he had even considered ditching his pop career just months earlier. During the first few weeks of the year, Bowie had auditioned for a West End role in the hippie musical Hair, and he’d supported Tyrannosaurus Rex on tour – but as a mime artist rather than a singer.

“I think David was going through an identity crisis during that period,” musical collaborator and producer Tony Visconti told Record Collector in 2019. “He wasn’t sure of what he could do and if people even liked him… Years later, when I asked, ‘What would you do if you weren’t a rock star?’ ‘Oh, I would be in musical theatre.’… He loved Anthony Newley and Lionel Bart and he was definitely considering that as a career, and the mime thing as well. He was leaving his options open.”

In retrospect, it’s no surprise Bowie decided to review his situation. As 1969 dawned, his name had adorned one album (also self-titled) and six singles for the Decca Records offshoot Deram – and all of them had flopped. He’d formed a folk group, Feathers, with his then girlfriend, Hermione Farthingale, and his friend John “Hutch” Hutchinson, during 1968, but that also fell apart when Hermione left Bowie early in 1969, leaving him devastated when she chose her acting career over him. Bowie and Hutchinson briefly continued as a duo, Bowie & Hutch, but when Hutchinson returned to his native Yorkshire, Bowie was again forced to re-evaluate.

“I wish I’d been a little more hard-ass”

Things then began to turn around after Bowie upped sticks for Beckenham, just outside London, where he moved into a flat and began working on new songs. Encouraged by two influential girlfriends, Mary Finnigan and Angela Barnett (the latter soon to become his first wife, Angie Bowie), Bowie worked up most of the songs he would record for his second album, and then discovered that his manager, Ken Pitt, had scored him a new record deal with Philips in the UK, via Mercury in the US – for one album and three singles.

Having been inspired by Stanley Kubrick’s landmark film 2001: A Space Odyssey the previous year, Bowie already had one ace up his sleeve courtesy of Space Oddity: a song which tapped into the global fever for all things space-related at a time when NASA’s famous Apollo 9 mission was aiming to land on the moon in late July.

For this reason, Space Oddity was quickly earmarked as Bowie’s first single for Philips and – with help from Rick Wakeman’s Mellotron, Paul Buckmaster’s warp-factor strings and Gus Dudgeon’s atmospheric production – it more than lived up to its title’s cosmic promise. However, while all concerned felt they’d achieved something special with the song, the record fell foul of the BBC’s ban on opportunist “space-themed” tunes during the summer of 1969, and Bowie’s single was temporarily blacklisted until the embargo was lifted.

In the meantime, Bowie returned to London’s Trident Studios to record his self-titled second album with most of the crew from the Space Oddity session, including keyboardist Wakeman and his friends, guitarist Mick Wayne and drummer John Cambridge, from the band Junior’s Eyes. Having passed on Space Oddity because he initially felt the song was “too gimmicky”, Visconti reclaimed the producer’s chair for the album sessions, though with hindsight he criticises his own input.

“The playing is really good, but the production is not tight,” he said in 2019. “It’s kind of loose and freewheeling. It was all done very casual, but maybe a bit too much. I think I was probably too friendly. I wish I’d been a little more hard-ass, making them do more takes.”

“You can hear him stopping on his way to ‘Hunky Dory’”

While Bowie’s 1969 album sessions may have been informal, they produced a bold, diverse and compelling collection of songs. Several of the best tracks (God Knows I’m Good; the plainly personal Letter To Hermione) showcased Bowie in acoustic troubadour mode, but elsewhere the selections ranged from the jaunty pop shimmy of Janine to the edgy, Bob Dylan-esque rocker Unwashed And Somewhat Slightly Dazed and the anthemic, Hey Jude-like Memories Of A Free Festival. Visconti and Wakeman, however, both believe the album’s high point was the underrated Wide Eyed Boy From Freecloud.

“He’d taken what a lot of folk singers were doing at that time, but moved it onto another level,” Wakeman told Record Collector in 2019. “I always think Wide Eyed Boy From Freecloud was the link to later things like Life On Mars?. It’s like you can actually hear him stopping on his way to Hunky Dory. I absolutely love that song and I think it was Tony who convinced David to re-do it with orchestration. He’d thrown it away as a B-side [to Space Oddity]. Tony said to him, ‘No, this is too good, the words are too powerful a story, it needs to be bigger.’ And he was right.”

As the album sessions wound down in late September, Bowie’s career received a boost when the BBC began playing Space Oddity, allowing the song to rise up the charts. After two months in the wilderness, it duly entered the Top 20 and rewarded Bowie with his first Top Of The Pops appearance, in early October 1969.

Curiously, while the singular Space Oddity eventually peaked at No.5, Bowie’s self-titled second album failed to capitalise. Perhaps a victim of its own bold eclecticism, it attracted several rave reviews, including one from the venerable New York Times (which declared it to be “a complete, coherent and brilliant vision”), but it didn’t dent the UK chart following its first release, on 14 November 1969.

However, after Bowie-mania kicked in with The Rise And Fall Of Ziggy Stardust And The Spiders From Mars in 1972, his self-titled second album was reissued (rebranded as Space Oddity, with a new cover photograph by Mick Rock) and received some overdue attention as it finally cracked the UK Top 20. A more than fair result for a record which Record Collector later dubbed “the first recognisably Bowie-esque album, in sound, scope and vocal delivery”.

“We were cutting our teeth on that record,” Visconti reflected in 2019. “We did a lot of good things, we did a lot of not-so-good things. But I think it holds up because, if anything, it shows what a great writer David already was at that stage. Like Cygnet Committee, An Occasional Dream and Space Oddity. And God Knows I’m Good, that’s a fantastic song.