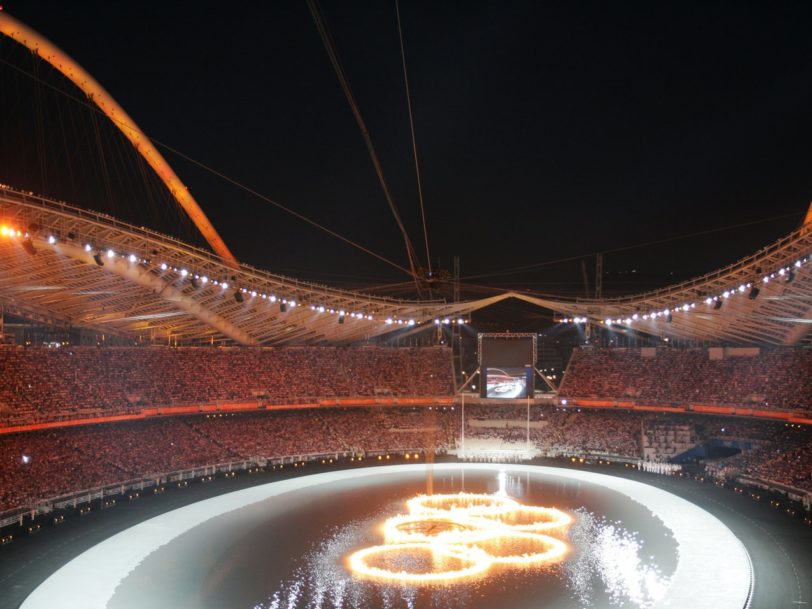 From epic spectacles to affecting displays of emotion, the best Olympics music performances have defined the Games’ opening ceremonies.

Music has always had a ceremonial role in the Olympic Games, and the competition has a rich history of fine official songs and notable orchestral and choral works inspired by sport. The world’s most popular musicians, including Stevie Wonder, Spice Girls and The Kinks’ Ray Davies, have performed at closing ceremonies, but many of the best Olympics music performances have come from the event’s opening ceremonies, among them Etta James’ version of When The Saints Go Marching In, which she delivered in 1984 accompanied by a gospel choir.

Here, then, are the ten best Olympics music performances that have defined opening ceremonies down the years, from both the heat of summer and the chill of the Winter Games.

Olivia Newton-John, known to the world as one of the stars of the 1978 musical film Grease, grew up in Australia, though she was actually born in Cambridge, England. John, wisely chosen ahead of Rolf Harris, said it was one of the most “exciting honours of my life” to sing for the whole world at Sydney’s lavish opening ceremony in 2000. Her performance was a duet with John Farnham, who’d had a global hit in 1986 with You’re The Voice. They teamed up to deliver a memorable version of Dare To Dream. “It was, and will always be, one of the greatest joys of my life,” said Sydney native Vanessa Corish, who co-wrote Dare To Dream with her partner, Paul Begaud, and Nashville’s Wayne Tester.

The 2002 Winter Olympic ceremony in Salt Lake City, Utah, was an imaginative, varied feast with no shortage of contenders among the best Olympics music performances. LeAnn Rimes sang the theme tune – her own song Light The Fire Within – while cellist Yo-Yo Ma performed on a field of ice as dove-shaped kites were released into the sky. The showstoppers, however, were country music band The Chicks (known then as The Dixie Chicks), who performed a rousing version of Ready To Run while dressed in woolly hats, scarves and thick winter coats. The gala, held on a cold February evening, was watched by three billion people worldwide, and The Chicks’ lead singer, Natalie Maines, rallied the crowd in the Rice-Eccles Stadium with a cry of, “Y’all ready?” as skaters dressed in prairie skirts and cowboy hats re-enacted the journey to the West by Mormon pioneers. “This place rocks,” said Chicks’ drummer Rick Sinese.

Singer kd lang, who was born in Edmonton, Alberta, was an inspired choice to perform at the opening ceremony of the 2010 Winter Olympics in Vancouver. She chose Hallelujah, by fellow Canadian Leonard Cohen, and delivered a stirring, spiritual rendition that remains one of the best Olympics music performances. The ceremony took place just hours after the 21-year-old Georgian luger competitor Nodar Kumaritashvili died while training for the Games, and Cohen’s lyrics seemed painfully fitting for the moment. “All sorts of things made the environment for the song transcend into something beyond all of us,” lang said. “The song just really blew through me. It was one of the quickest six minutes I’ve ever experienced.”

Olympic opening ceremonies are all about spectacle – and few could match the thrilling drama of the opening of the China Olympics in 2008. In the dark of night, a clap of thunder from 2,008 tightly ranked fou drummers (using bronze versions of the oldest Chinese percussion instrument, dating back to the Xia dynasty), marked the start of a drum spectacular. These traditional musical instruments, which looked like laundry baskets and were lit from within, were used to play a sweeping drum song by musicians using flailing glowing red sticks to beat in time to a light-show sequenced by computer. The rhythmic movements of the percussionists, filling the floor of the stadium known as the Bird’s Nest, created a stunning spectacle of music and movement.

“As far as I am concerned, Montserrat Caballé has the best voice of anybody in existence,” said Queen singer Freddie Mercury, who had been hoping to perform their duet, Barcelona, to a global TV audience for the opening of the Olympics in Spain. Mercury died in 1991, however, and Caballé went on stage and poignantly performed alone in the opening ceremony, with Mercury’s unmistakeable vocals accompanying her while a video of them together played on the big screen. Even without Mercury’s appearance, the inspiring Barcelona became one of the best Olympics music performances.

The opening ceremony of the Los Angeles Games, in 1984, celebrated the musical legacy of the US, and the two most memorable performances that summer came from Etta James and John Williams, the New York-born composer famed for film work such as his Star Wars soundtracks. Williams was asked by the organising committee to compose a fanfare for the modern Olympic movement. “I’m not an avid sports fan and I have never been to an Olympics,” Williams said at the time. “But from watching Olympics competition on television, I developed a feeling that I aspired to make the theme of Fanfare. A wonderful thing about the Olympics is that young athletes strain their guts to find and produce their best efforts. The human spirit stretching to prove itself is also typical of what musicians attempt to achieve in a symphonic effort. It is difficult to describe how I feel about these athletes and their performances without sounding pretentious, but their struggle ennobles all of us. I hope I express that in this piece.” Williams achieved his aim, and when he led the orchestra in a version at the opening ceremony, it was a genuine “goose bump” moment.

Opera master Luciano Pavarotti was battling pancreatic cancer when he sang Giacomo Puccini’s great opera aria Nessun Dorma (aka Let No One Sleep) for the opening ceremony of Italy’s Winter Olympics, in 2006. Nessun Dorma had been popular with sports fans since becoming the unofficial theme for the Italy 1990 football World Cup. Conductor Leone Magiera later revealed in the book Pavarotti Visto Da Vicino (Pavarotti Seen From Close Up) that the singer’s rousing rendition had been pre-recorded because it would have been too dangerous for his health to sing live in the Stadio Olimpico. “The orchestra pretended to play for the public there, I pretended to conduct, and Luciano pretended to sing,” Magiera wrote. “It came off beautifully, no one was aware of the technical tricks.” Pavarotti died a year later.

Canadian star Céline Dion gave a stunning performance of the rousing ballad The Power Of The Dream – with stirring lyrics about “the power of the dream that brings us here”, penned by David Foster, Linda Thompson and Babyface – at the opening ceremony of the 1996 summer Games. Dion later donated the money she received for the occasion to a fund to support athletes from her homeland. The singer was accompanied by pianist David Foster and joined by the Atlanta Symphony Orchestra and the Centennial Choir. Ensuring its place among the best Olympics music performances, the song became the unofficial anthem of Atlanta 1996 and was even repeated at the closing ceremony by a choir of children. Dion described the experience of singing at the Olympics as “one of the thrills of my life”.

With some of the greatest musical exports in the world, the UK knew it had to put on an extravaganza for the opening of the 2012 London Games. As well as stellar live performances by younger British acts such as Arctic Monkeys, Dizzee Rascal and Emeli Sandé, talent director Danny Boyle brought in the quintessential symbol of British music, Beatle Paul McCartney, to close the show, with a crowd-pleasing version of the Fab Four classic Hey Jude. McCartney was even able to joke about a misstep that meant he was slightly out of sync with the playback. “I was supposed to wait for a cue. But I forgot. Why? Well, there’s this bloody great bell that we didn’t know about. It was deafening. There was no stopping, it was the Olympics.”

Icelandic star Björk stole the show at the opening of the 2004 Greek Games with a memorable, eye-catching performance as she debuted her single Oceania, a song she had composed specifically for the event. As well as her stunning rendition of the heavenly nautical ballad, she created a dazzling impression with a giant purple silk dress that slowly unravelled to double as a projection screen. As the fabric rippled across the stadium, it displayed an image of the map of the world. Topping our list of the best Olympics music performances, Björk’s display was worthy of a gold medal.

For more great marriages between music and sport, check out our best football songs.