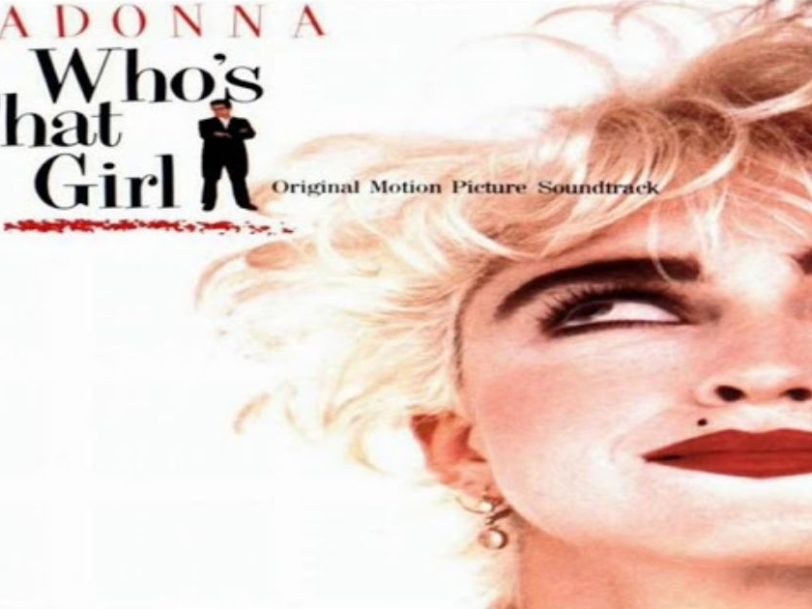 Madonna’s ‘Who’s That Girl’ album may have been one of the 80s’ biggest soundtracks, but would records sales translate to the box office?

Though Madonna’s domination of the music scene, newspaper headlines and popular culture seemed absolute in the mid-80s, her film career remained an open question. After the critical and commercial hit Desperately Seeking Susan in 1985 – to many an authentic representation of the real Madonna, who had not long emerged from the hip New York City dance scene – along came 1986’s Shanghai Surprise with her then husband, Sean Penn. A rare commercial misstep without any Madonna songs to bolster it, the singer would seek to rectify that the following year, ensuring that her leading role in the screwball comedy Who’s That Girl had a soundtrack album featuring original material.

Listen to the ‘Who’s That Girl’ soundtrack here.

It appears Madonna had passed on working with George Harrison on Shanghai Surprise’s title track, which he had demoed with Vicki Brown, but there would be no such reticence this time: Madonna’s music would serve as a fantastic promotional tool for any film. Though the singer contributed just four of the record’s nine tracks, the Who’s That Girl soundtrack album certainly did the business, shifting around eight million copies worldwide, and the “Queen Of Pop”’s four songs represent an almost perfect sweep of the mid-80s Madonna hit formula.

First, you get the title track. The latest in a run of Madonna No.1s, it topped the US and UK charts on its release in July 1987, and was co-written with True Blue’s co-producer Patrick Leonard (who would collaborate with the singer many more times, earning later credits for Oh Father, Something To Remember and 1998’s Frozen). Holding its own among the best Madonna songs, Who’s That Girl is “Latin Madonna”, with her command of a gently looping melody complementing a few words of Spanish and presented with a charming, low-key video that owes a debt to the Pied Piper caricature originally showcased on the previous year’s Open Your Heart. Madonna is also here clearly riffing on Michael Jackson’s charismatic everyman appeal, and so certain were executives of the song and video’s success that it ended up retitling the whole movie, which had originally been written as Slammer.

Causing A Commotion – the soundtrack’s second single – is classic “Dance Madonna” and was written and produced with Into The Groove’s co-creator Stephen Bray. This single made it all the way to No.2 in the US and No.4 in the UK, as well as securing Madonna another now almost obligatory No.1 position on the US Billboard dance charts. It did all of this without the customary music video, with a clip of a performance from Madonna’s recent world tour being used instead.

Then you get “Ballad Madonna” with the exquisite The Look Of Love. No relation to the Burt Bacharach standard, this is a gorgeous Patrick Leonard co-composition and, though no video was filmed for this either, by the time it was issued as a single in Japan and some European markets in late 1987, a clip culled from Who’s That Girl footage was used to help plug the movie’s home-video release. Surprisingly, The Look Of Love briefly interrupted Madonna’s record-breaking run of Top 5 UK singles – it peaked at No.9 – but normal service resumed with her next release: the Like A Prayer single would make No.1 a little over 15 months later.

Finally, you get “Pop Madonna” on the catchy Can’t Stop – another track created with Stephen Bray. It’s the most throwaway cut of the four but it’s a charming period piece, closest to some of the album tracks on True Blue. You perhaps get a sense of Madonna’s frantic work pace from Can’t Stop, but it’s since become a bit of an overlooked curio in her catalogue.

The close of Madonna’s platinum-pop era

The Who’s That Girl soundtrack’s five other songs, selected from Madonna’s Sire labelmates, range from the familiar – Scritti Politti, with the brassy Best Thing Ever – to the largely forgotten, such as Michael Davidson, whose Hi-NRG contribution, Turn It Up, was produced by the Stock Aitken Waterman hitmakers. Club Nouveau, then riding high from their recent cover of Lean On Me, offer the chunky Step By Step, while Coati Mundi, who also appears in the film, closes the collection with the solid El Coco Loco (So So Bad).

The best of the non-Madonna contributions is Duncan Faure’s 24 Hours, produced by Stephen Bray. Faure came from South Africa and was a member of the country’s rock outfit Rabbitt and, briefly, Bay City Rollers. 24 Hours is a 60s-flavoured pop cut that deserved a wider hearing; no doubt its inclusion on this very successful soundtrack album offered some sort of financial payday (though he didn’t write it).

Released on 21 July 1987, just two weeks ahead of the film, the Who’s That Girl soundtrack performed better than the movie, peaking at No.7 in the US and No.4 in the UK, and proving that Madonna’s music-making instincts remained intact. Next time, she would score big on screen and on record, pairing with Hollywood legends Al Pacino and Warren Beatty for the all-star vehicle Dick Tracy and recording its companion album, 1990’s I’m Breathless.

Who’s That Girl may have been part marketing exercise, but these fine songs also signalled the close of Madonna’s evocative platinum-pop era, with her musical ambitions next shifting in a more creative, less calculated direction.