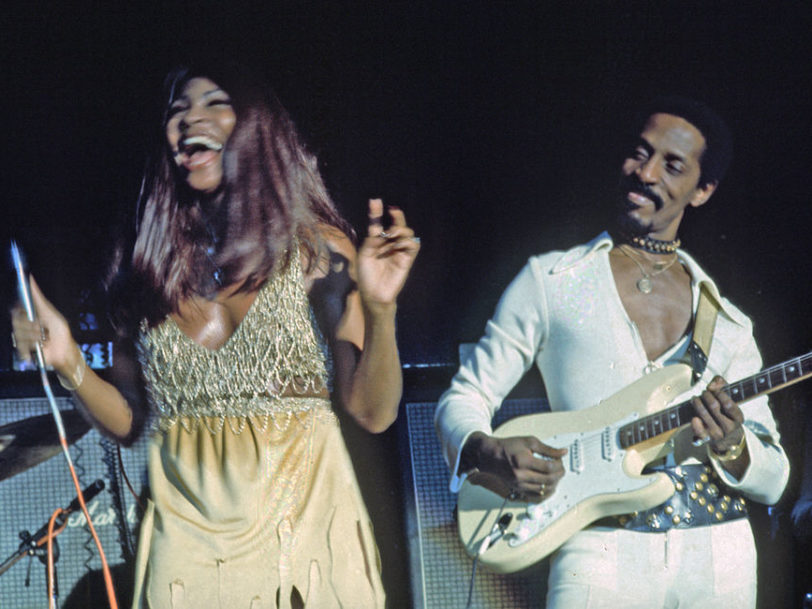 Tina Turner took a pop standard and made it her own. Among numerous singers of Proud Mary, Turner remains the true River Boat Queen.

She did not write the song, and was only the fourth artist to score a hit with it in the space of three years. It was written from a male point of view. It was a buffet composition: everyone ate from its generous table, from sci-fi actors to the biggest rock icon of all. Yet Tina Turner made Proud Mary one of her signature songs, indelibly associated with her mighty voice and irrepressible personality. The first time she released it, on 30 January 1971, in a version recorded with her then-husband, Ike, it made US No.4 and won a Grammy. Two decades later, Turner returned to the song as a solo artist. And Proud Mary keeps on burnin’…

Proud Mary was composed by John Fogerty after he was discharged from the Army Reserve in 1968. It took the point of view of the working man. Fogerty’s band, Creedence Clearwater Revival, represented rock returning to its roots after the hippie era, delivering a gritty, faded-jeans, blue-collar kinda noise that was easy to identify with and influenced numerous other artists, from Bruce Springsteen to Gerry Rafferty and Status Quo. Fogerty’s ability to speak from a down-to-earth position helped his work resonate beyond rock’n’roll: his songs have been widely covered in soul, country, R&B, even reggae – and none more so than Proud Mary, which presented the feelings of a guy who worked manual jobs and didn’t even realise there was a good side to urban life until he rode the river boat of the title, some distance from the unremitting hard graft he had to endure.

Soul music certainly influenced Proud Mary, making the song a natural choice for Ike And Tina Turner. Fogerty reckoned its iconic introduction had been inspired by Beethoven’s Fifth Symphony, but it turned out closer to the classic Stax sound exemplified by Eddie Floyd’s Knock On Wood or Wilson Pickett’s In The Midnight Hour. It had that soulful Memphis feel, honed in the city’s Beale Street clubs. Little wonder that black artists were among the first to pay homage to Proud Mary after Creedence’s version made No.2 in 1969.

“You and Tina could tear this thing up”

First on board was Solomon Burke, who recorded the song in Muscle Shoals, Alabama, and it saw some minor chart action in the spring of 1969. Burke did two things to ease the path for Ike And Tina Turner’s version: he created an introductory rap, explaining that Proud Mary was “nothing but a big ol’ boat”, and his ancestors had worked in its sweaty hull as “stokers, cooks and waiters”. His black audience would have recognised an undercurrent of slavery in this narrative, though he amended the lyrics to suggest things had improved a little, saying he “had a lot of fun in New Orleans”. But Burke also had a more direct influence over Ike and Tina’s version: he claimed he told Ike Turner, “You and Tina could tear this thing up.”

The next soulsters to proudly ride Fogerty’s steamer were Checkmates, Ltd, featuring Sonny Charles. Produced by Ike And Tina Turner’s former producer, Phil Spector, they made the US Top 70 with their version of Fogerty’s song, and its driving, highly infectious horn arrangement was duly noted by Ike Turner.

Ike and Tina began to perform Proud Mary on tour. Tina told Rolling Stone magazine they’d auditioned a female artist to join their backing singers, The Ikettes, who sang Proud Mary to show what she could do. By the time they were playing shows at the Las Vegas Hilton, the song was an established part of their set. They’d booked sessions at the city’s United Recording Studios, but were short of material, so decided to capture some of the songs in their show on tape. Ike and Tina sat in their car and worked on the song, having resolved to “do it, but let’s change it”, in Tina’s words.

“I wanted a larger-than-life ambience”

The duo invited United’s engineer Brent Maher to their show at the Hilton, and he was knocked out by their version of the song. In an inspired move, to replicate some of the sheer joy he’d witnessed them deliver, he configured the studio gear to replicate their stage set-up. Rather than seeking separation and audio cleanliness, he told Rolling Stone, “I didn’t worry about instruments leaking into each other’s mics. I wanted to create a larger-than-life ambiance.” He recorded Tina in front of the band, not in a booth.

The result was a musical riot, starting with intimate chat as Solomon Burke had done, and using horn charts similar to The Checkmates, Ltd’s version. Tina’s spoken intro, promising to deliver something “nice and easy”, was something she might have said on stage, and when the song soon leapt from mellow to wild, it was like the soul power of Ike And Tina Turner could not be held back any longer

Celebrating all the best aspects of CCR’s original. Their version of Proud Mary appeared on Ike And Tina Turner’s 1970 album Workin’ Together and hit No.4 in the US. There were further renditions on live albums, including Live At Carnegie Hall (1971). Solomon Burke had been right: Ike and Tina tore this thing up.

Though it had already undergone its definitive transformation, Proud Mary, in which almost every line was a hook, continued to tempt artists, including one who released several albums but was barely a singer at all, Leonard Nimoy – Star Trek’s Mr Spock. Elvis Presley made Proud Mary a punchy part of his act; Tom Jones offered a brassy swinging version. It became part of cabaret culture, and numerous nightclub performers delivered it. Former Philadelphia supper-club singer Billy Paul brought soul back to the big wheel with his jazzy 1973 interpretation.

Tina Turner wasn’t finished with Proud Mary. Her return to pop superstardom in the 80s (kickstarted by another cover of a song she made her own: Al Green’s Let’s Stay Together saw a version on Tina Live In Europe (1988). Five years later, she re-recorded it for her biographical movie, What’s Love Got To Do With It, which scored a platinum soundtrack album on both sides of the Atlantic.