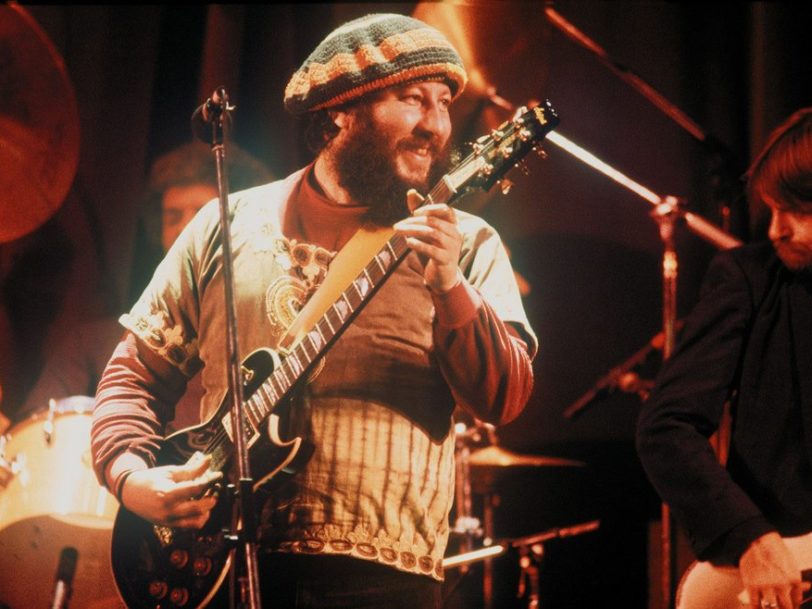 One of Britain’s blues guitar greats, Fleetwood Mac founder Peter Green gave the band success, before becoming an acid casualty of the 60s.

Peter Green went from being one of the most influential blues-rock guitarists of his generation to a cautionary tale among 60s acid casualties. A sensitive soul motivated by his love of blues giants like Freddie King, Otis Rush and BB King, Green’s role in founding Fleetwood Mac quickly elevated him to becoming one of the era’s most distinctive and accomplished guitarists.

By all accounts a quiet and introverted man, Peter Green disguised his innate shyness behind a 1959 Gibson Les Paul, but in three short years his music became ubiquitous, topping the UK charts. Though his discomfort with fame soon took its toll, Green’s inner torment inspired some of the late-60s’ most emotive, heart-rending songs – notably Albatross and Man Of The World – before he tragically faded from the limelight in an terrible, LSD-induced cloud of mystery.

While his successes were overshadowed by the world-conquering feats of Fleetwood Mac’s later years – the 70s albums Rumours and Tusk among them – his bandmates Mick Fleetwood and John McVie have never failed to praise Peter Green’s genius and frequently give interviews mourning the loss of the guitarist’s talent.

In a sad story of lost potential there’s much to celebrate about Peter Green, arguably the finest blues guitarist to ever hail from the British Isles.

Before the beginning: birth and the blues

Born in London on 29 October 1946, Peter Greenbaum grew up in Bethnal Green, honing his guitar skills from age 11 onwards amid the skiffle craze. Like many of his generation, Green cut his teeth in numerous skiffle bands before the early-60s music scene seduced him into learning blues licks while mastering the lead guitar in Peter Barden’s R&B outfit Peter B Looners (later renamed Shotgun Express). At the time, the most famous blues guitarist on the circuit was indisputably Eric Clapton; the ex-Yardbirds musician was playing with John Mayall And The Bluesbreakers, whose fans were so enamoured with Eric they famously scrawled “Clapton Is God” in graffiti on a wall in Islington.

Upon hearing that Clapton had quit The Bluesbreakers, Peter Green saw a chance for his big break and applied to fill the guitar god’s shoes. John Mayall was in no doubt of his greatness. “We’ve got a new guitarist,” he said to producer Mike Vernon, founder of Blue Horizon, the label that would go on to release Fleetwood Mac’s debut album. “We’ve got rid of Eric. This one’s much better.” At a time when blues-rock acolytes were still hero-worshipping Clapton, Peter Green slowly won fans over with his unique feel and displays of pure emotion. Even Green’s idol, BB King, later complimented him, saying, “He has the sweetest tone I ever heard. He was the only one who gave me the cold sweats.”

Assuming lead guitar on John Mayall And The Bluesbreakers’ third album, A Hard Road, Peter Green dispelled any comparisons to Clapton by demonstrating his mastery of rapturous, ever-lasting sustain on the instrumental cut The Supernatural. Green’s embrace of reverb and highly-composed finger vibrato was refreshing in an era when hyperactive, energetic virtuosos like Jimi Hendrix would come to prominence; his calm restraint is what made him so special.

Having grown in confidence and wanting to form a band of his own, Peter Green left The Bluesbreakers, taking drummer Mick Fleetwood and bassist John McVie with him. “This band’s called Fleetwood Mac,” Green said, naming themselves after both Mick and John’s surnames. Though Peter Green had a vision of the style of blues he wanted the group to play, he was never entirely comfortable being at the forefront and tended to share vocals with guitarist Jeremy Spencer. Green’s showmanship, however, soon revealed him as the real driving force behind the band – crowds were wowed with his sublime guitar playing and, as Fleetwood Mac grew more tightly-knit, it was only a matter of time before they caught the attention of the mainstream.

Fleetwood Mac’s breakthrough single came on 16 April 1968, with the voodoo thump of Black Magic Woman, a spine-tingling Peter Green composition that hit No.37 in the UK but which would later become more popular when covered by Santana in 1970. The group wasted no time at all building on this momentum with a cover of Little John Willie’s lustful Need Your Love So Bad, which, released on 5 July 1968, again hit the Top 40 and continued to solidify Peter Green’s standing as a blues maestro in a league of his own.

Around this time, Fleetwood Mac was joined by another guitarist, Danny Kirwan, and their next single, released on 22 November 1968, found the band soaring to even greater heights. The woozy, surf-tinged instrumental Albatross hit No.1 in the UK and became the group’s first international hit. With a guitar riff inspired by Santo And Johnny’s Sleep Walk, Peter Green’s sweet-sounding slide guitar was a surprising departure from Fleetwood Mac’s more raucous blues jams, leading the song to outsell The Beatles and achieve mass commercial appeal (it remains the UK’s biggest-selling selling rock instrumental of all time).

Sitting there so green: mental decline and a cry for help

Met with an intense touring schedule in the wake of such success, Peter Green grew uneasy with the levels of fame Fleetwood Mac had achieved. As he turned to drugs to cope, and his consumption of LSD increased, the band grew concerned as Green’s behaviour became more unusual, his inner demons surfacing in unsettling ways. Often, they manifested themselves in his lyrics, exposing Green as a tormented soul struggling with his emotions.

Nowhere is Peter Green’s inner turmoil better represented than in the single Man Of The World, which was released on 22 April 1969. A mournful lament seeping through gently-plucked minor chords, with Green’s achingly beautiful vocal cries – “I guess I’ve got everything I need/… “But I just wish that I’d never been born” – the song reached No.2 in the UK and did little to dent Fleetwood Mac’s commercial prospects, despite Mick Fleetwood later admitting it was an obvious cry for help.

By now, Peter Green had begun wearing robes and a crucifix. After watching a TV programme on poverty in Africa, he tried to convince his bandmates to donate all proceeds from his hits to charity. He was unsuccessful. Fleetwood Mac’s next single, Oh Well, released on 4 December 1969, was yet another UK hit, reaching No.2. It showcased Peter Green’s guitar playing at its best in a rowdy blues-rocker in which he protests: “I can’t help about the shape I’m in/Can’t sing/I ain’t pretty and my legs are thin.” Whatever shape he was in, it was clear that Peter Green’s way out wouldn’t be so easy.

The darkness cooks: an LSD casualty

In early 1970, Fleetwood Mac embarked on a European tour. Upon arrival in Germany they were invited to join a party at a hippie commune at Highfisch, near Munich, where the band claims Peter Green was given LSD and went on a catastrophic acid trip which sent him over the edge. “All it took was a couple of tabs,” McVie said, “and he never came back.”

Given that bassist Danny Kirwan also went on to suffer with mental illness following an acid trip at the same event, the band continues to pinpoint Highfisch as the tipping point that sent Peter Green over the brink. Having slowly grown distant from the band in the preceding months, after the party the guitarist’s personality changed beyond all recognition. “For sure he never really came back from that, to our recollection,” recalls Mick Fleetwood.

The band’s final single with Peter Green, released in May 1970, was The Green Manalishi (With The Two Prong Crown), a trippy, acid-inspired garage-rock freak-out in which the devil manifests itself through greed for money and wealth, reportedly inspired by a dream the guitarist had. Despite its dark subject matter, the song still hit No.10 in the UK. Sadly, however, this would be the end of the road for Green, who quit Fleetwood Mac that same month. He later suffered a mental breakdown and, aside from an occasional solo release in the 70s, Peter Green disappeared into relative obscurity.

The world keep on turning: death and legacy

As Peter Green turned his back on fame and became a hermit, tabloid stories about his self-banishment from the music scene persisted for many years, much of them based on truth. Green began hearing voices and became a diagnosed schizophrenic. He sported a beard like Rasputin and let his fingernails grow long, crawling on all fours and howling like a wolf. Green was even arrested for threatening to shoot his accountant with a shotgun and underwent electroconvulsive shock therapy.

The sensationalism behind these stories takes the focus away from the brilliance of Peter Green’s music. Thankfully, by the late 90s, he was able to overcome his mental problems and resumed playing the blues, though he would never again achieve the chart successes of his youth. Upon hearing that Peter Green died peacefully in his sleep, aged 73, on 25 July 2020, Mick Fleetwood paid tribute to his old friend by commending Green for inspiring us with how music should “always be delivered with uncompromising passion”, asserting that his talent “trailblazed one hell of a musical road for so many to enjoy”. In the end, that’s what lasts – it’s the music itself by which we should measure the man.

Throughout Fleetwood Mac’s early years, Peter Green stood out as a supremely gifted guitarist with a divine ear for bluesy dexterity and sheer emotional range, blessed with a soft, spiritual voice of his own which sought to keep him from succumbing to the blue devils. He left us with a cool, calm and collected catalogue of songs which later inspired classic rock guitarists like Joe Perry of Aerosmith and even Metallica’s Kirk Hammett, forever ensuring Peter Green’s legacy as a blues legend.

“We are all dwarves standing upon the giants who preceded us,” Green once said. Little did he realise that he himself would become one of those giants.